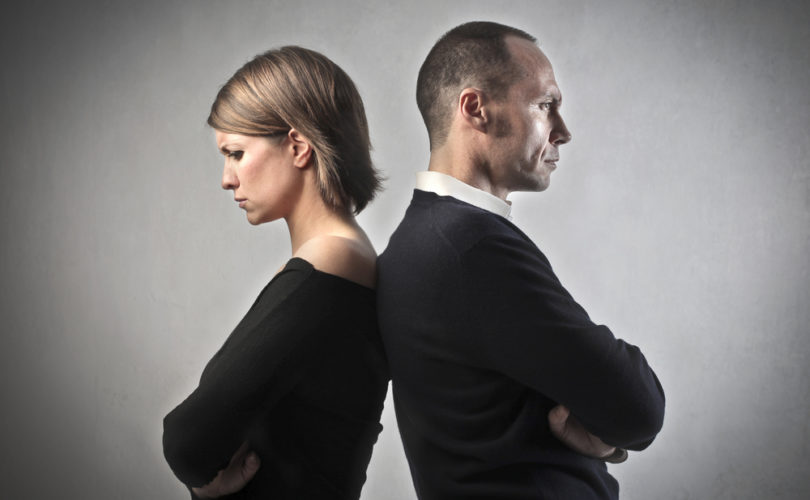 December 23, 2015 (ThePublicDiscourse) — There’s a great deal of fog today about what the actual divorce rate is in the United States. Some say it’s around 50 percent, others—including some notable authors—say it’s nowhere close to that. Some incorrectly believe that the 50 percent number comes from a simple comparison of the number of weddings and divorces in a given year, yet no serious scholar or demographer has ever measured divorce rates that way.

In the world of sociology of the family, few pieces of seemingly objective data have so many different competing interpretations, as a 2014 study, creatively titled “Breaking Up is Hard to Count,” has noted. No one but a small handful of family scholars seems sure just what the current rate actually is. But it doesn’t need to be this way. It is important that those who care about the family know the actual divorce rate so we have a sober understanding of how bad the story is regarding marital longevity. And, if there’s good news, we should know that as well.

As it turns out, a detailed look at marriage and divorce statistics reveals both good and bad news. In fact, there is some remarkably good news buried in the data. Before we examine that good news, however, let’s establish what the actual divorce rate is and why so many different numbers are bandied about.

There are four main ways scholars measure current divorce rates, and these four main measurements provide four different answers because they examine the elephant from different perspectives. I will start with the less frequently used measures and conclude with the most popular, which leads us to the very good news. The explanation of these four is drawn from the work of Professor Paul R. Amato, the scholar leading sociologists go to for insight on such issues.

Pro: This measure provides the largest-scale picture of divorce prevalence in a population and makes it easy to compare divorce rates of different countries.

Con: This number isn’t very useful, since it includes all people, even those—such as children, the unmarried, and elderly couples—who are not at risk for divorce.

Pro: This is a very straightforward, easy-to-understand number.

Con: As it includes all divorces, it includes those who married badly then divorced—perhaps when very young—and are now in a subsequent strong, enduring marriage of many decades. It also fluctuates relative to general marriage rate.

This is the number of divorces per 1,000 married women. Like the crude rate, it is an annual rate. In 2011, nineteen out of every 1,000 marriages ended in divorce. As Paul Amato explains, “An advantage of the refined divorce rate is that it has a clear interpretation. That is, dividing the rate by 10 yields the percentage of marriages that end in divorce every year.” So, the refined annual divorce rate is currently 1.9 percent.

Pro: A very precise annual number that gives the rate of divorce as a subset of the actual married population, the proper comparison.

Con: Doesn’t give the bigger, longitudinal number of divorces over time.

This is the “40-50 percent” number that most people cite. It is not a hard, objective number, but an educated projection. It is calculated by looking at a particular “cohort”—a large group of people marrying within a particular measure of time—relative to general life-tables.

Pro: It is the measure most scholars use and most widely known, giving the larger picture of the overall marital lifetime expectation.

Con: It doesn’t give an objective number of actual divorces.

The cohort measure rate provides a sophisticated estimation of the general risk of divorce for those marrying today. As the University of Denver’s Scott Stanley explains frankly, how this number is derived is “crazy complicated.” In a not-yet-published White Paper, Stanley explains:

The 40-50% number comes from a detailed analysis of various population demographics, including ages, life span projections, etc. It represents a sophisticated projection of a calculated risk, much like projected life span for babies born today. . . .  [It] is a valid projection under current conditions and it pertains to new, first time marriages.

In short, it comes from looking at divorce trends of the last few decades (those of earlier cohorts) and applying these numbers to couples marrying today, the current cohort. Special calculations are made to account for the fact that measuring the number of divorces for those married fifty or sixty years ago is much more reliable than doing so for those married twenty or thirty years ago. There is nearly no risk of future divorce for the former group, a moderate degree in the second group, and so on. Each year of successful marriage reduces one’s life-time risk of divorce. Amato adds,

There are various generational life factors that affect this number from decade to decade, because certain qualities and external factors vary among generations: robustness of the national and local economy, job strength, sexual mores, overall college attendance and graduation, cohabitation rates, etc.

Currently, the cohort measure is typically calculated as being in the 40-50 percent range for couples entering their first marriage.  Both Amato and Stanley place it in the 42-45 percent range for those marrying today. Stanley explains, drawing from a recent conversation with Amato, that

young married adults are not divorcing at the same rate as their parents did at similar ages, so it is likely that the divorce rate will decline in the future, once the Baby Boomers (who were and continue to be highly divorce prone) leave the population. Thus, as others have suggested, the future may well be brighter than the 42 to 45 percent risk estimate suggests, but we do not yet know this will be the case.

But here is the most important news concerning one’s lifetime risk of divorce. While the 40-50 percent divorce risk number is indeed correct, it actually applies to no one—or, at least, to very few.

How Personal Factors Influence Your Risk of Divorce

There are a handful of personal factors and life experiences that sociologists have determined significantly affect one’s overall risk of divorce—for good or ill. This means many couples will have a significantly higher or lower lifetime risk of divorce than the average. For a good number of couples marrying today, their risk of divorce is nearly zero. Others face an uphill battle if they hope their marriage is to survive.

The major factors that determine a couple’s risk of divorce include:

So while the 40-50 percent projected rate of divorce risk is true and reliable, there are important personal characteristics that put everyone at different levels of risk, some dramatically so. Many people of serious faith and practice, even with some of the above risks, have a tremendously high likelihood of lifelong marital success because of the values they hold regarding sex outside of marriage, the sacred and covenantal nature of marriage, and its importance as a vocation.

Many others, given the age we live in, will have a greater number of these troubling factors. Their presence is certainly not destiny or unavoidable destruction, but they can and often do present additional challenges for newly married couples. Think of it as some rocks placed into your backpack on the journey of marriage. It can be helpful to be aware of the extra burdens you bear and seek help in carrying them. Often, a remedy that is both most powerful and simple is for such couples to find an older couple who has successfully learned from and overcome the struggles of married life and can accompany you and your spouse, lightening your load with sage advice, encouraging you when times are tough, and—most of all—just being there, journeying along with you. Older, co-journeying couples are a great protection against the shame and isolation that can poison marriages.

It is important that those who care about the state of the family have a realistic view of its strengths and weaknesses today. Considered carefully and understood properly, these statistics about divorce offer us an important part of that picture.

Glenn T. Stanton is the director of global family formation studies at Focus on the Family and the author of eight books on various aspects of the family including The Ring Makes All the Difference: The Hidden Consequences of Cohabitation and the Strong Benefits of Marriage (Moody, 2011) and Loving My LGBT Neighbor: Being Friends in Grace and Truth (Moody, 2014). Reprinted with permission from The Witherspoon Institute.