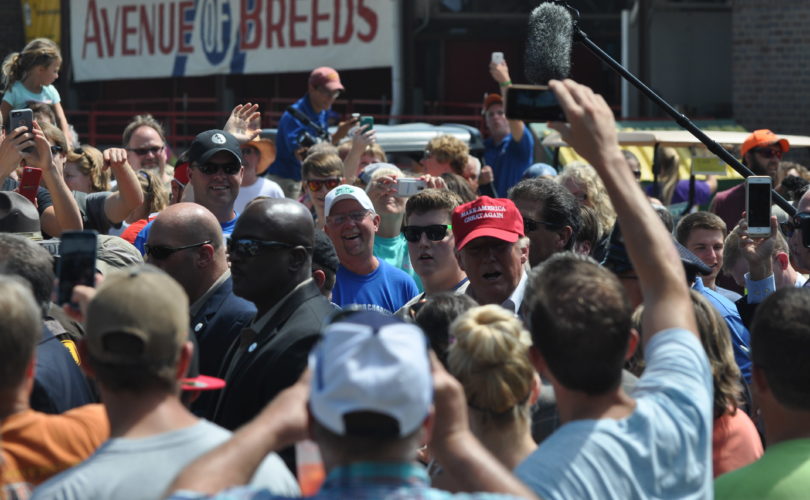 URBANDALE, Iowa, February 3, 2016 (LifeSiteNews) – As a registered Iowa voter, I took part along with my husband in Monday night's Iowa caucus.

It was an honor and a pleasure, because I consider myself a patriot, and I think it's our responsibility as citizens to exercise our right to vote.

As a person of faith, I consider the election a top priority, since we are called to involvement, bringing that faith to the public square for the good of all – and, as one way, through our example of bringing others and ourselves to God in hopes of salvation.

As an observant Catholic, I see that every election has urgency, because the sanctity of God's gift of life has yet to receive adequate representation in politics.

Some inroads have been made in the fight for life. But while increased protection for life has come about through varied new legislation across the country, and the women's health façade has been pulled off the nation's largest abortion dealer, life, marriage, and the family remain under ever increasing attack.

So this election cycle is no exception for the mandate that Catholics and all people of faith be in the fray, voting for life, marriage, and family.

The Iowa caucus can be a circumstance where your vote counts in a way that it may not ever count in a general election.

It's true grassroots: people assembling with their neighbors in local churches and schools to caucus, gathering to choose a candidate, and potentially having a hand in deciding policy.

It's also an opportunity to convince those neighbors that your candidate should get their vote, and with some people going in the door that night expecting to make their final decision after hearing about the candidates at the caucus, being there for your candidate is key.

Further, given the close results of some caucuses, this year's included, the importance of being present to cast your vote is no small thing.

Much has been made about whether the outcome of the Iowa caucus is a predictor of the general presidential election, and even more has been made of Iowa's first-in-the-nation status by many who write Iowa off as too small, with nothing much going on beyond agriculture.

I won't quibble over the merits of those points.

I will say that the time and attention expended here by the candidates in what is now the years leading up to the caucus afford Iowans a unique perspective, whether or not we are unwisely dismissed by some as flyover country.

For months and months, I can leave my home and encounter a candidate on a personal basis fairly easily, with town hall meetings; rallies; house gatherings; and candidates showing up in cafés, at the State Fair, and at countless other events.

It helps to live in a suburb of the capital city, and mine is one where many candidates establish their Iowa offices. But the small towns get their share, as, again, the caucus drives candidates to perform true grassroots campaigning, traveling the byways and talking with the people.

If you haven't gathered information or a sense of the candidates by caucus night, you've been avoiding doing so.

Monday night brought record turnout. We worried a bit at one point about access to our precinct location and getting registered in time when we first encountered the traffic at the site. Work and school rush hour traffic had nothing on caucus night surrounding this particular church.

Lines were long to check in, people stood around edges of the room once the seats were filled, and voters continued to file in after start time. It was good to see so many people engaged.

Some candidates had a local representative speak on their behalf, a person from our same neighborhood. Others shipped someone of note in from out of state; in our case, we had two candidates send a representative in, a governor and a retired Navy admiral.

Some of the statements were polished and smooth, others not so much.

A few candidates had no one ready to speak in our location, resulting in a gentleman jumping up to offer his personal experience of one candidate and say his piece on the election in general.

Our state senator also swung through to thank us for being at the caucus.

Candidates will make the rounds to as many caucus sites as they can during the two-hour session, popping in and out quickly with a sort of drive-by campaign speech, stumping for last-minute support.

We had such an experience, and I can see why they do this, as it affected the crowd.

Everyone had agreed to let the candidate have the final slot in the line of speakers, to give him the best shot at making it in time. But we didn't know until the last minute whether we would hear from the candidate or his representative – in this case, a high school student – adding to the drama.

In either case, it would have been fine, as the Urbandale, Iowa voters in my location listened to everybody speak, no matter who he was, and let the process work, lining up when the time came to cast their ballot, waiting patiently for everyone to get through.

My precinct ran out of ballot forms because of the record turnout, resulting in us simply writing our candidate's name on the slip of paper we received at check-in to turn in for our ballot when voting time came. I'm going to venture the guess this was the case elsewhere as well.

My husband and I both had a good feeling after having taken part in the caucus. We're just two people in one precinct in the one state that happens to cast the first official vote, but it always is great to do whatever you can.

God doesn't expect that mountains be moved by a single person – only that we offer our best individual effort, and give our faithfulness to him.

This ride is far from over; rather, it's just the beginning of a crucial choice for America. And while this thought is often tossed out to make a political point, in the case of standing up for life and family, it has never rung truer.