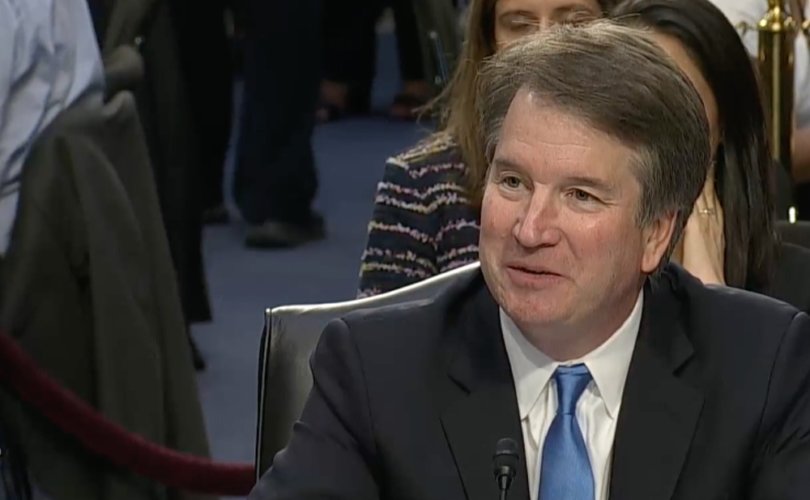 September 11, 2018 (LifeSiteNews) – When Judge Brett Kavanaugh, at his confirmation hearing, was asked by U.S. Sen. Dianne Feinstein (D-CA) whether he believed Roe v. Wade was the “settled law of the land,” he answered in the affirmative – as we expected him to. Kavanagh agreed that Roe v. Wade set a precedent that was reaffirmed by Planned Parenthood v. Casey. Kavanaugh referred to this dynamic of a second court case settling an existing precedent as “precedent upon precedent.” Pro-lifers might be worried this means that Kavanaugh believes abortion is an unchangeable policy that is set in stone. But that’s not the case.

What Kavanaugh is confirming is that yes, these things are currently precedent. That’s it. He’s not making a moral argument for abortion. He is not even saying he agrees with it. And he carefully refrained from stating whether he believes Roe was correctly decided.

He is simply making a factual statement. If one reads between the lines of what he is not saying, it could be concluded that just because a precedent has been established, it does not mean that it cannot be dismantled. Precedents don’t last forever. Precedents can be wrong. And there is no precedent more widely criticized by appellate judges than Roe. A repetition of an error does not make it any less of an error.

Study Constitutional history, and you can conclude that the days of Roe v. Wade are numbered. The reason for this is that the foundation of the Constitution itself, and the direction of its history, is the recognition of the equal dignity of those who, at various times, were deprived of their rights and suffered violence that was given legal cover under a different name. This legal cover was often mistakenly recognized by the Supreme Court for a while, but then such decisions were overturned.

Dred Scott v. Sandford (1856) is the most commonly cited instance. The slaveholder's right to property eclipsed and subsumed the slave's right to freedom. But the Constitution was eventually amended to correct the error. Another example of “settled” law that was later overturned is segregation. Plessy v. Ferguson was a racist landmark decision of the U.S. Supreme Court issued in 1896. It upheld that racial segregation laws for public facilities were constitutional so long as they were separate but equal in quality. Segregation in the United States was an established precedent long before Roe and lasted longer than the current 46 years of legalized abortion. Plessy was considered settled law – until Brown came along 58 years later.

Brown v. Board of Education of Topeka was the U.S Supreme Court case which overruled Plessy. The Court acknowledged that existing state laws establishing segregated schools for black and white students were unconstitutional. In other words, just because Roe v. Wade and Casey are “settled” laws or have set a precedent, that does not mean another court case cannot come along to overturn them – especially if those original cases are not based in the Constitution, history, or traditions of the country.

Many reversals of Supreme Court cases came about when new evidence was brought forward that made it clear that someone's rights, not previously recognized, were being violated. With the way abortion history has unfolded, embryological science has taught us more about the child in the womb than we learned in all human history prior to Roe. Moreover, the harm abortion brings women has come more and more to light. Courts have already recognized both of these trends. That, combined with new legal challenges, can bring Roe down in the same way its erroneous ancestral decisions were reversed.

Kavanaugh and his predecessors know this. It was certainly promising when Kavanaugh conceded that the courts can be wrong when he was questioned by U.S. Senator Ben Sasse (R-NE). Kavanaugh himself referenced Brown as an instance of righting a judicial wrong. That’s not to say that stare decisis, or precedents, is bad practice. In fact, Sasse explained in a Fox interview that we want precedents. We need them on the one hand, because judges shouldn’t make up the rules of the game as they go along and on the other hand, circuit courts need to know how to mete out justice consistently. But that does not mean that precedents can’t be wrong or that they can’t be corrected.

The 80-something arrests of protestors disrupting the democratic process of the Senate hearings last week indicate that the Left is hysterical with worry. They know they cannot stop this confirmation, and they know they are losing support among the American people. They also know that Judge Kavanaugh looks not to his own views, but to the Constitution as it is written. He does not pull imaginary ideas from it – and that is what abortion is. Judging from past Constitutional history, Roe will go the way of other discarded lies.