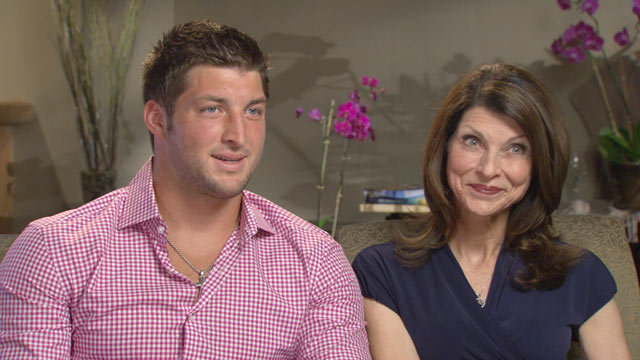 January 17, 2012 (LiveAction.org) – I am not a sports fan, so the first time Tim Tebow popped up on my radar was right before the 2010 Super Bowl, when I caught wind that Focus on the Family would be airing an ad during the game featuring Tebow and his mom. According to Planned Parenthood and other pro-abortion groups, it was going to be a piece of blatant anti-choice propaganda pumped into our living rooms against our will that would make all our children Republicans and yadda yadda yadda.

When the ad finally aired, I was watching, and was… kinda disappointed. There was nothing even remotely controversial about it, and I do love me some controversy. Basically Tebow’s mom says Tim almost died in the womb and she’s really glad he didn’t. That’s it. I can’t think of anything less controversial than a mother saying she’s glad her baby was born, but these are strange times we live in.

Since then, Tim Tebow has become something of an icon, and I don’t just mean to sports fans. His passionate, unapologetic Christianity has made him a lightning rod for debate about religion in the public square. To his detractors, he is either a hypocritical phony or a naive Boy Scout. To his supporters, he is either a pretty darn good quarterback you can’t help but root for, or a modern-day prophet. Also, he’s dreamy.

I have been half-watching the rise of Tebow, and grimacing in preparation for the fall. It hasn’t happened yet. Maybe it’s inevitable he gets knocked back a bit, but in any case, he seems to be inspiring more and more people, and doggone it if his religious faith doesn’t seem to be utterly sincere.

Like everyone in America, I knew Tim Tebow’s mom was told to abort him and didn’t, but it wasn’t until yesterday that I learned the complete story. A friend posted a video on Facebook of Tebow’s parents telling the tale to which his mother had only alluded in the infamous Super Bowl ad. It’s basically Tebow’s super hero origin story. He’s like Wolverine, if Wolverine were less an invincible guy with an adamantium skeleton, and more a handsome young chap who plays football and loves Jesus.

Here’s the gist: Tebow’s father was a missionary in the Philippines. One night, while preaching in a remote area, he was overcome with grief at all the children losing their lives to abortion in America, and prayed to God, “If you want another preacher in this world, you give me Timmy.” The next morning he told his family about his prayer, and they joined in with him. Said Mr. Tebow, “We started praying by name for God to give us Timmy.”

At this time, Tebow’s mom was 37 years old and the family already boasted four healthy children. They were living in an area that “didn’t have great medical care,” according to Mrs. Tebow. Friends and loved ones cautioned against having another child. Due to her age and their remote location, a pregnancy would be high risk.

When she conceived, she went to see the local doctor, who told her “it wasn’t a baby at all; it was a mass of fetal tissue, and I needed to abort him immediately if I were going to save my life… Said it was a tumor.”

At that point, said Mrs. Tebow, “We didn’t really have to make a decision.” She said they had decided years previously to trust their children to God. She didn’t have any medical care until months later when they moved to Manila, but throughout the months carrying little Timmy, she was continually sick, and thought she might lose him on a daily basis.

At last, she gave birth to a healthy baby boy and named him Timothy. He was decidedly not a tumor. In fact, he won a Heisman Trophy and became a starting quarterback in the NFL and, strangely enough, through just a few words and a simple gesture, he has become the preacher for whom his father prayed.

This story resonates with Christians because it illustrates trust in God and the hand of providence at work in the lives of the faithful. It is also a profound example of what St. Francis of Assissi meant when he said, “Preach the gospel at all times. If necessary, use words.”

But this story is not just for Christians. It’s for anyone who has ever believed something despite herself. It’s a cautionary tale against putting too much faith in science and technology, and too little in what our hearts tell us. It is a true-life example of how one man of humble origins can have an incalculable impact on a culture.

It is also a powerful testimony to what the world loses when a woman aborts her baby. No one — not even most pro-lifers — would have blamed Mrs. Tebow for saving her own life. But she believed her baby would live — in fact, she bet her life on it – and he did live, in a big way.

We can all learn from Tebow’s mom. She looked ahead into a future that was uncertain, and she had peace. A woman who experiences a crisis pregnancy and chooses life does the same thing. We each do it, every day, to some extent.

No matter our religious beliefs or lack thereof, we should recognize the powerful message in what the Tebow family has experienced. None of us knows what will happen to us tomorrow, or if tomorrow will happen at all. The simple fact that we make plans for next week is an act of faith. It’s what keeps us going. Faith is simply human. It’s what holds back the darkness for every last one of us.

Rather than scoffing at Tim Tebow or worshiping him, let’s be glad he’s one of the children that made it, and that he’s proving how precious life can be when a mother has the courage to choose it.