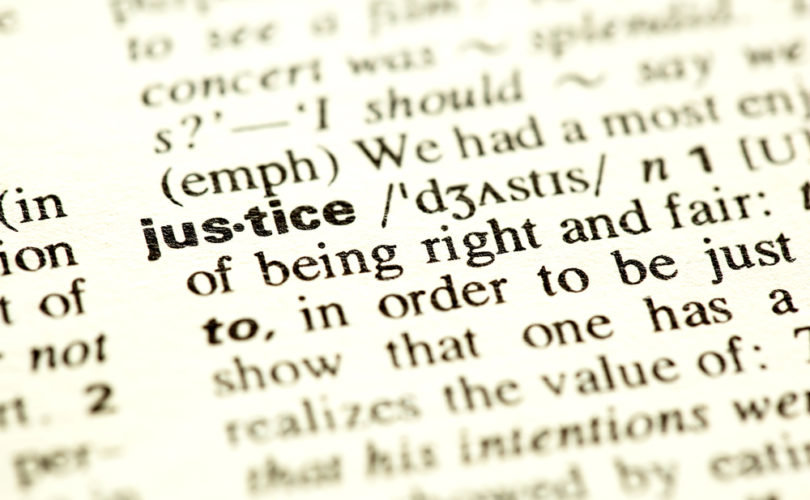 January 4, 2016 (CrisisMagazine) — For much of my academic life, I considered the terms, “values,” “rights,” and “social justice,” to have equivocal meanings. When these terms were used without clarification, they disrupted any fair social order. Each of the phrases had two or more meanings that usually meant the direct opposite of each other. Conversations and legislation in which these terms were used almost always ended in incoherence. One group used a term one way; the next group used it in an opposite way. Both usages were found in the language with various explanations of how they came into common usage. Each usage had its own philosophical presuppositions.

“Value” was a term from Max Weber or Nietzsche that denied any grounding to our ethical lives. Whatever we chose as our purpose or end was all right. The term admitted no rational scrutiny, only arbitrary choice. “Science,” in this sense, dealt exclusively with the means whereby we might achieve our selected end or purpose, whatever it might be. To say “this is my ‘value’” meant simply that I “opt” for this or that desire. I have no intrinsic reason why one choice is better or worse than another. The word “value” was thus a function of relativism. To “guarantee” values, or agree on them, merely meant accepting whatever we willed, not understanding and being held to what is right or wrong, true or false.

The word “rights” caused even more confusion. Especially in Catholic social thought where it was equated with some objective duty. But the modern usage of the word comes from Hobbes. It means that no objective goods can be rationally comprehended. A “right” was whatever I thought that I needed to avoid violent death. A “right” was the intrinsic power to obtain it and keep what I decided.

“Social justice” was purportedly a new addition to the classical legal, distributive, and commutative justice ideas found in Aristotle. It was rather connected with the Leviathan state. Social justice was based on the idea that what is “due” to people for their flourishing is what decides their good. It was not personal virtue that was at the center of moral and political life. Social and political “structures” determined virtue and vice.

So the “vocation” to “social justice” derived its nobility from “service” to the poor and down-trodden through promises to “re-structure” the state or economy. Oftentimes this renovation of society was promoted in revolutionary terms, because state and social “structures” determined the meaning of virtue and vice. “Social justice” always hovered in the shadow of totalitarianism. The state became the center of all human life. Social Justice received its self-justification from what it distributed to everyone.

In this context, Michael Novak and Paul Adams have brought together in one concise consideration an understanding of “social justice” that does not arise from these “value-rights-justice” presuppositions found in the post Machiavellian understanding of modernity and the state. In Social Justice Isn’t What You Think It Is, they undertake a systematic re-reading of what is known as “Catholic Social Doctrine.” But their “re-reading” turns out to be directed to everyone, to social and political thought as such. The approach is unique and convincing. Initially it arises from the experience of Adams who has been involved in what we now call “social services,” that is, those efforts of the state and other bodies to meet pressing needs of the poor, disadvantaged, or otherwise needy. The theoretical issue is over what kind of analysis best deals with these issues, while retaining and expanding any real meaning of a civilization of love and reason.

As the family has come more and more into a crisis status, the growth of state agencies to meet the result has been almost exponential. Chesterton said somewhere that if we stop doing things out of personal sacrifice, love, and generosity, we will soon find ourselves having to pay others to do the needed things for increasingly high wages. This same point is really what Benedict XVI argued; namely, that no bureaucracy could substitute for the kind of personal care and love that actual human beings require above minimum physical needs that can be purchased.

What is argued here is lucid and well-grounded. It is a much better explanation of both facts and vision than other approaches to basic world economic and political issues. Social justice is not, as too many maintain or imply, a revolutionary virtue whose object is the restructuring of the state, family, or society as the principal way to deal with modern problems. Rather it is an aspect of Aristotle’s understanding of justice and politics. It is a flushing out of the habit of virtue in all its implications. This virtue is located within each person. It is an acquired habit, the result of repeated and prudent acts.

This centrality of habit/virtue is where the discussion of human good properly belongs. Novak is particularly good in spelling out how this classic virtue is involved in those activities that are necessary, and even beyond necessity, for achieving the common good. The careful discussion of charity is a disciplined effort to acknowledge that into any social order something from outside of it may be necessary for its ultimate good. The classical idea of benevolence is the natural basis of the supernatural virtue of charity.

The “common good” is another basic idea from Aristotle and Aquinas that needs fuller restatement in the light of the centrality of personal virtue. The “common good” is not some grand plan to reform all of society to meet and eliminate every human ill. Novak is a realist when it comes to human evils. Any actual human common good must deal responsibly with this basic problem. Evils (vices) will always be present in any society. They will always need to be confronted with clear eyes. What is wrong in the world is mainly located in the human heart and relates to human freedom. We cannot pass down the virtue or vice of one generation to another because each generation of persons must itself decide whether it will be good or not in its concrete activities. Talk of reform of society that does not include talk of habits, of virtue and vice, is but another way of abandoning any real understanding of man in society.

The common good is an order of thought, habit, law, and custom among acting persons in which the actual potentialities of individuals can and do develop. No human being or organization can foresee the varied goods of all types that arise out of the freedom and intelligence of human beings. The common good does not mean that everyone has exactly the same things. It is not uniform. Rather, it means that everyone develops different things. The total goods implicit in human potential and variety are allowed and encouraged to come forth. Thus, the common good will also include those differing institutions of law, police, army, and common sense that directly deal with the vices that also arise from their intelligence and wills.

In many ways, this book is about America and its earlier tradition of law, free markets, federalism, and generosity as something new in the world, yet as something that continues and develops classical and Christian thinking of the good of mankind. The degree to which cultural America has deviated from its own founding on matters of sin and relativism is treated in detail. The Founding Fathers were often aware of the dark side of human nature, and sought to counteract it, as some described in the Federalist.

But it is quite clear that America’s general contribution to the world’s fund of practical knowledge is a major accomplishment, particularly concerning issues of poverty and human dignity. The dynamism that exists in each human soul is fundamental to recognize. Man’s intelligence and drive are the real sources for meeting real needs of actual people. But they will not be allowed or properly developed by just any religious, ideological, or traditional mode of thought that impedes the basic place of virtue in human life.

Novak uses several initiatives or remarks of Lincoln to illustrate his point about how social justice properly understood works. He cites Lincoln’s remarks on the provision for patents that the American Founders put in the Constitution. Perhaps no single act has been more important in providing for ordered human progress than the law of limited patents. For this provision allowed individuals to use their own initiative to invent or write things that would step by step contribute to human needs and wants in growing and ever-more complex societies. Again and again, the activities and institutions between the individual and the state are emphasized as central to true social justice. No actual person is an isolated being. Rather he is a member of a family and myriads of other associations designed to accompany human purposes through free and responsible human activity.

We find here a particularly fine discussion about just what really does help the poor to become not poor. People need not be poor. The first step is to understand that wealth is not another commodity or property. The constant repetition of the statistic about 20 percent own 80 percent of the wealth implies that this is an obvious injustice. It isn’t. The statistic completely overlooks the cause of wealth production and the growth of entire economies including that of the poor. It is ultimately intelligence and the skill in applying it. The principal agent for dealing with poverty is not some foreign aid or rearrangement of laws or state structure. It is a recognition of the capacity of individuals, if given a chance, to deal with problems themselves in free concert with others.

There is an almost diabolical temptation in the souls of many politicians, clerics, and academics to want to solve someone else’s problems. Instead of thinking what people themselves can do to solve their own problems, the temptation is to think of ways to do it for them. This latter approach almost always ends up in emptying society of that individual and personal vitality that alone is able to vivify a society. Neither individualism nor socialism, or their variants, can show the record that a personalist-based approach to social justice as a virtue can achieve.

“It is not at all necessary that there should be poor people on this planet. The Creator of this world has made it abundantly fruitful for all, and has hidden within it huge resources for human wit to discover and put to use for all,” Novak wrote. This book was unfortunately mainly written before Pope Francis’ full comments on economics were clear. The tentative reflections here are based almost solely on Evangelii Gaudium.

If anyone from the pope to the bishops to college professors and students, to media, business people, and government cadre is looking for a succinct and far-reaching guide to reconsider how to think about the order of this world and its relation to the human good, it would be difficult to find a better book than this work of Michael Novak and Paul Adams.