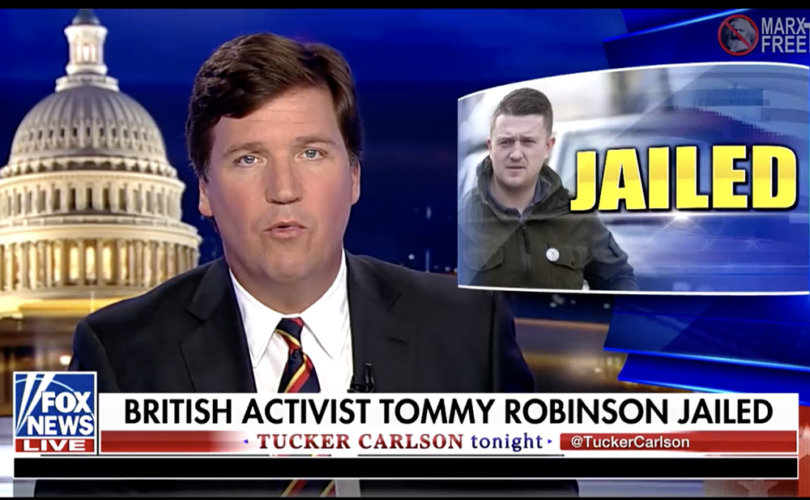 “If you don’t think they are coming for every single person in this country who are saying things that are inappropriate or difficult for the political establishment you are kidding yourselves,” Kassam (author and former Breitbart London editor in chief) said, warning that it would only be a matter of time before it would be every free person’s “turn to be deleted, silenced, arrested, with your life in jeopardy”.

June 4, 2018 (American Thinker) – Unlike the judge who delivered his 13-month sentence, I watched Tommy Robinson's entire Facebook Live stream on the Muslim grooming gangs trial outside Leeds Crown Court. It is a little over an hour long and very enlightening.

The other thing I learned from the video is that ordinary Brits love Tommy Robinson. In the hour that Robinson is outside of the court house, multiple people stop to tell him that they appreciate what he's doing. Apart from two non-whites, almost all are scared to be filmed with Robinson, but they want to take pictures with him. They want to stop and chat with him. (See Fox News Tucker Carlson report on Tommy Robinson below)

Almost all the Muslim accused hurl verbal abuse at Robinson about having had sex with his sister or wife or mother. Robinson simply asks them if they feel at all guilty, and by their response, it appears that they don't.

The courts also contend that Robinson is disturbing the peace, but the only disturbance I saw throughout the video comes from the accused when they tell Robinson that they have “f—– his mother's fanny,” whatever that means. At one point they even gesture through a courthouse window that they would like to slit the throats of Robinson and his camera crew, and they also threaten to kill a woman on the street. For unknown reasons, they are permitted to make such threats without any repercussions.

Caelan Robertson, the cameraman for Tommy Robinson, was interviewed by InfoWars. He is now legally allowed to talk about the court ruling. There are many astounding aspects to Robinson's court ruling, but to me, the most disturbing of them all is that the judge admitted that he had not watched Robinson's Facebook livestream video. Robinson was arrested, issued charges, arraigned, and sentenced, all within the span of four hours, while men accused of raping and trafficking girls as young as eleven are afforded the protection of a long, drawn out trial.

Why was this case rushed through while the Muslim grooming gangs trial has gone on for years? These accused men are allowed to continue to work in restaurants, drive taxis, own businesses, and rape more young English girls. If the cases are not talked about, the families of other young girls will not know that these men are dangerous and that they live in their area.

Without Robinson to report on the case, it's impossible to find out anything about the verdict of that trial.

If you run a search on the Muslim grooming gangs in Leeds, you will find only one article from the Yorkshire Evening Post – from 2014.

Why are these men who are accused of trafficking, sexual abuse, and rape of English girls being protected by the courts, by the media, and the politicians? Media outlets like the Guardian would like us to believe that it is to protect the girls themselves that we are not supposed to talk about the Muslim grooming gangs trial, but these girls have been betrayed at every turn.

Nigel Farage's View On The Tommy Robinson Row May Surprise You

Hundreds of demonstrators descended on Whitehall to protest against far-right figurehead Tommy Robinson’s arrest for allegedly breaching the peace outside a Leeds courthouse. The area had to be closed to traffic as the group gathered outside Downing Street on Saturday afternoon.