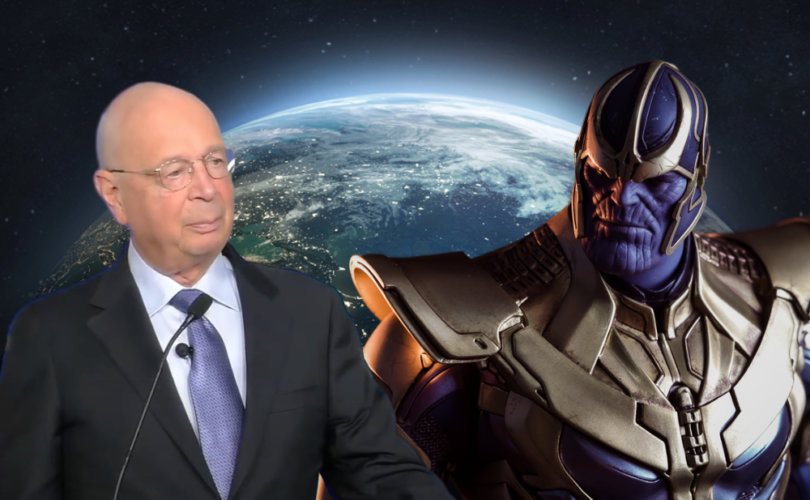 (WND News Center) – In the Marvel film “Avengers: Infinity War,” Thanos, a super-being from another planet, is seeking six gems – the Infinity Stones – to put into the Infinity Gauntlet, a weapon which, when completed, enables the one who wears it to extinguish half of all life in the universe with just a snap of his fingers.

Thanos is cast as a super-villain, but he thinks of himself as an altruist. He explains to another Marvel character, Dr. Steven Strange, that he witnessed the destruction of his own planet, Titan, and that his motives for using the Infinity Gauntlet are purely beneficent:

“Titan was like most planets – too many mouths and not enough to go around. And when we faced extinction, I offered a solution … I could simply snap my fingers and they would all cease to exist.”

Thanos dismisses Strange’s accusation of genocide. “I call that ‘mercy,’” he says. “The hardest choices require the strongest wills.”

Here in the real world, we have our own class of self-appointed deities trying to run the planet, including Bill Gates and the Bill and Melinda Gates Foundation, Klaus Schwab and his World Economic Forum (WEF), the army of WEF minions who have made their way into national governments across the globe, and the World Health Organization (WHO).

These puny gods, and the countless others who preach their dogma, demand that we worship at the altar of “climate change,” implementing policies they espouse without question, allegedly to save us all from destruction.

In keeping with the Marvel metaphor, here are six “gems” of our lives over which the mad titans of “climate change” seek control: energy, food production, housing, currency, laws/law enforcement, and governance. In each, they are demanding the implementation of policies they insist will “save the planet.”

These elites display the kind of arrogance that always precedes catastrophe. They assume that they are so brilliant and omniscient that they can anticipate every eventuality, every possible snag. Any student of history should be able to debunk that claim, but very recent events offer yet another pointed example.

In 2018, the government of Sri Lanka imposed agricultural regulations driven by the WEF’s “climate change” agenda. All non-organic fertilizer was banned. Within two years, agricultural production collapsed. Then, the overall economy. This past week, riots in the capital city drove the government leaders to flee the country.

Other nations don’t seem to be getting the message. England is trying to prompt farmers to “retire.” The government of the Netherlands has announced a plan to close a certain number of farms and ranches to help ameliorate the effects of “climate change.” (Rumor has it that the WEF plans to buy up Dutch farmland. This isn’t far-fetched; WEF devotee Bill Gates is now the single-largest farmland owner in the United States.) Dutch farmers and citizens have taken to the streets in protest. Similar protests have erupted in Germany, Italy, Spain, Poland, and Armenia.

There is plenty of reason to believe that housing and energy policies driven by “climate change” will produce equally dismal results. Even more ominously, the other three “stones” are tied to enforcement of whatever policies our “climate change” titans manage to implement. A digital currency can be manipulated by those in control of it, and actual wealth frozen or taken from those who oppose the regime.

As we’ve already seen in other contexts here in the United States, law-abiding citizens can be targeted by law enforcement for defending themselves or their property, and are characterized as “insurrectionists” or “domestic terrorists” for protesting what they believe to be illicit or ill-advised government actions. And the sovereignty of independent nations is the ultimate impediment to global implementation of the goals being advanced by the “climate change” demigods.

Then again, maybe policy failure is part of the plan. An outgrowth of environmentalism generally, the “climate change” movement has adopted many of environmentalism’s more extreme tenets, including population reduction. Despite the spectacularly wrong predictions of his 1970 bestseller “The Population Bomb,” author Paul Ehrlich is still considered the granddaddy of population-themed environmentalism. Ehrlich maintains that the ideal population of Earth is less than 2 billion people, an attitude that science writer Alex Berezow has described as “openly misanthropic (and) vaguely genocidal.”

Toward the end of “Infinity War,” it becomes clear that Thanos’ plans have not played out as he envisioned. He, like all megalomaniacs, blames not himself but his victims, who refuse to be suitably thankful to Thanos for the unfathomable losses his actions have inflicted. In response, Thanos decides to double down on his methods.

“I thought that by eliminating half of life, the other half would thrive,” Thanos complains to the surviving Avengers. “But you’ve shown me that’s impossible. As long as there are those that remember what was, there will always be those that are unable to accept what can be. I know what I must do. I will shred this universe down to its last atom, and then, with the stones you’ve collected for me, create a new one … a grateful universe.”

History shows that megalomaniacal ideologues – consider Pol Pot, Mao Zedong, and Josef Stalin – do not care how many millions of people die in pursuit of their failed ideologies. Thus emerges one of the universal lessons in Thanos’ story arc: When the plans of the powerful fail, it is the powerless who pay the price.

Thanos and the Infinity Gauntlet are fiction, but the threats we are facing are real. Those who want global control over our nations and our lives must never get it.