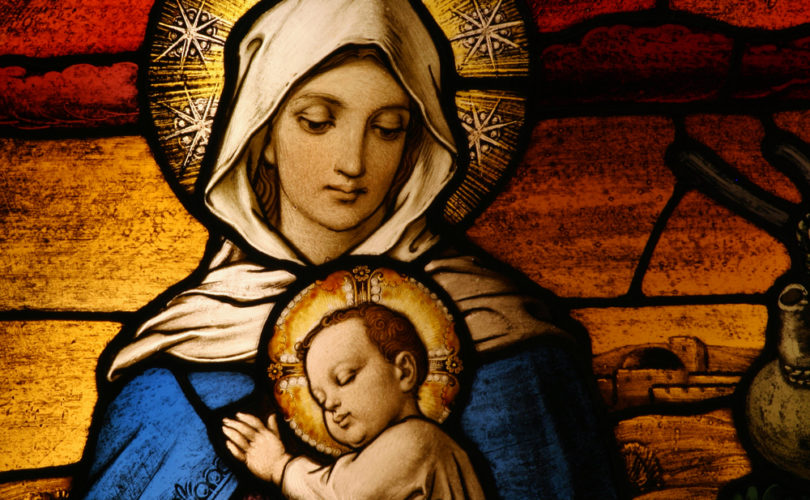 October 1, 2018 (The Catholic Thing) – Like other professional men, if I want to attend weekday Mass, I have a choice between an early Mass in my parish and a mid-day Mass near my work. I love seeing colleagues at the later Mass, and the thrill of the sacrifice, which comes specifically from putting work aside for the moment and giving that time directly to God. But at the morning Mass I have the great blessing of being instructed in Christian wisdom by the moms there with little children.

My parish is St. Jerome's in Hyattsville, celebrated as a strong community in a “Benedict option” sort of way. Many families live within walking distance of the church. On any weekday, there can be ten or fifteen moms at Mass. Most have one child with them, but some bring two or three – perhaps one in a sling, another in a stroller, and a third getting around on his own steam.  If the family is homeschooling sometimes older children, too, get up early and lend a hand.

At most parishes there will be a couple of moms like this, not always the same ones at every Mass. In a city, where there are many parishes, and people improvise to catch the most convenient Mass, these moms with children will come to know one another, forming a kind of secret conspiracy of real Catholic devotion.

I mentioned being schooled in Christian wisdom, first of all – paradoxically – by the example of the husband and father, who is not there. These moms are mainly homemakers, although some, of course, will have jobs on the side. The point is that the husband has not insisted that they go out into the workforce full time, as many do. He is willing to accept the cares and occasionally large sacrifices that go along with raising a family on a single income. That is, he is a highly noble figure in our day. The mom and the father together testify to the priority of their children over wealth and security.

Secondly, I am instructed by the heroism of the mom. It's important to emphasize that it is heroism, “above and beyond the call of duty” (more shortly on “duty”). How heroic? Morning Mass is a deeply ordered act, which the mom manages to set up at the start of the day, at a time of life that inherently resists order. Her presence at that service has all of the character of a beachhead on Iwo Jima; the consecration and her Communion, a raising of the flag.

To get there at all, she's wrestled a child to change a diaper, and wrestled with a couple others too, or pleaded and cajoled, to get them dressed. In winter, there are layers of clothing, potentially depressing to put on, knowing that they have to come off and be put away in an hour. Always there is the principle of household entropy at work, the tendency to disorder.

Her path goes all uphill. The church will be cold in the winter and hot in the summer. Most likely the homily will be uninspiring: she's grateful if it doesn't knock her back (“women don't have to breed like rabbits”) or promote a heresy, like the one she was arguing against with a Protestant friend at a book club last week. Don't discount the small mortification of often appearing in public not “put together.” (In that sense she did give up the heels and lipstick, as in the abortion ad.)

But above all there is the repeated mortification involving the “main show,” the reason she is there at all, to pray and worship. Her children are fussy or asking her for things. They can't sit still and run all over.  She has to take them to the back, yet again. She sits on a chair in the vestibule, plays give-and-take with her toddler, and can barely hear anything in the sanctuary. It's far from the romantic ideal of peaceful communion with God. What is the point of this?  It's not even clear she's improving in anything, she thinks.

But her perseverance proves important truths, to which over time she becomes a “martyr” or witness. Others may read about them in books, but she at least learns them by concrete experience. Consolations in prayer do not matter. We give ourselves to God through the will, not the imagination. Grace will assuredly be imparted by the objective character of the sacrament and a believer's subjective willingness to receive.

In simply getting to “the place of grace” in the morning, she is standing beside the Cross with Mary and becomes, like her, a “spiritual vessel, vessel of honor.” She cannot “feel” the grace that she gains at the Mass, and that flows out from her to her family, relatives, friends, and prayer intentions, but as an exercise of faith she trusts that it is so.

We live in a society where people are afraid to praise anyone (but in personal life only) for fear of seeming to criticize everyone else. I know that. Let's be plain then: there are many moms who want to get to weekday Mass but can't manage it, or who started and couldn't continue. Likewise, there are couples where the mom would love to stay at home and can't, or in conscience before God believes she can and should work full time. I am not criticizing these brethren in the slightest, not by a long shot.

I say, instead, for Christians the strange “logic” of a parable seems at play. Remember the workers who were hired at the last moment but got the same payment as those who bore the brunt of the day's work? Yes, there are degrees of glory, but that parable would seem to hold for more than differences in time. Who knows how the Lord will repay in his generosity?

But that moms at Mass are heroes of the faith, among others not at Mass, that is a sure thing.