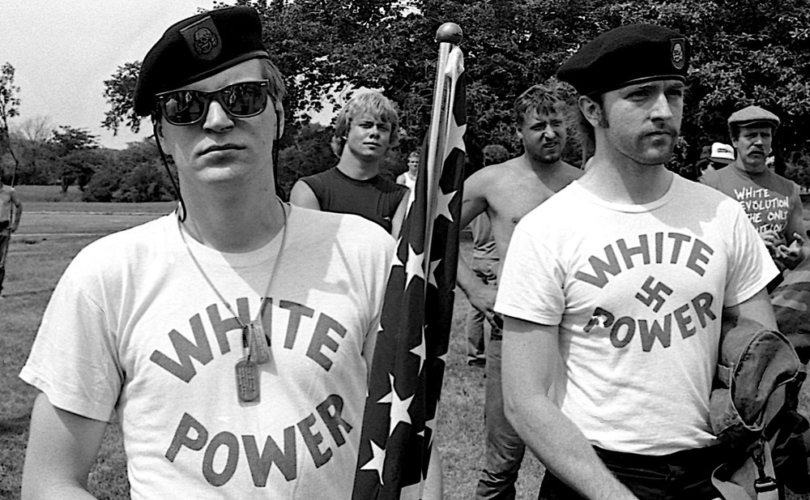 January 17, 2018 (Pro-life Action League) – This past Sunday, as the big rally before the March for Life Chicago was getting underway in Federal Plaza, a strange-looking group of young white men came marching west down Adams Street towards the pro-life crowd.

There were about a dozen of them in all, dressed alike in khakis and dark coats. They carried American flags, but no other signs. Their faces were masked behind American flag bandanas, and many of them wore sunglasses, making for quite a sinister appearance.

As they reached the northeast corner of the plaza—where I happened to be stationed—they unfurled a banner reading, “PROTECT OUR POSTERITY: BLOODANDSOIL.ORG.” “Blood and soil” is an infamous Nazi slogan.

The group was apparently intent on infiltrating the rally and march. I wasn’t going to let that happen.

So I approached a Chicago police officer and pointed out that this group was clearly not in line with the pro-life event taking place, for which a permit had been secured. The officer quickly assessed the situation, and, despite their claims to be pro-life, he and several other officers ordered the group to leave Federal Plaza and move across the street to the public sidewalk.

I also alerted my mother Ann Scheidler, who sits on the March for Life Chicago planning committee and serves as the police liaison. She was soon on the scene, thanking the police for so quickly ejecting these troublemakers from the plaza.

So who was this group? Were they actual white supremacists, intent on using the March for Life Chicago to advance their vile ideology? Or were they abortion supporters posing as white supremacists in an attempt to make us look bad?

It wasn’t until I got back to my office Monday that I was able to do some digging and discover the truth. The website on their banner was for a group called Patriot Front, which lauds the United States as a “White American homeland.” Would our opponents go to the trouble of making a phony website just to pull off a stunt like this?

Once I found the group’s Twitter account, there could be no doubt. Posts going back for 4 months made it clear that this was a racist, anti-Semitic group. I also learned that they have been turning up to counter-protest at leftist rallies in the Chicago area. They appear to be active throughout the country.

It Runs in the Family

Interestingly, this isn’t the first time that a member of the Scheidler family has confronted white supremacists. In 1926, the year before my father was born, my grandfather Matthias Scheidler and great-grandfather Alex Pursley shut down a klavern of the Ku Klux Klan in Hartford City, Indiana. The Klan had been very active in Indiana in the mid-1920s.

After learning that a local barber was the klavern secretary, they went to the shop for haircuts. As my great-grandfather got his cut, my grandfather snuck into the back and hid until the shop closed. He found a complete list of local Klan members, and then the two threatened to have the names published in the local newspaper unless the klavern disbanded—which it did.

You can read the full account of this incident in my father Joe’s memoir, Racketeer for Life. In a small way, I was following in my ancestor’s footsteps with my adventure this past Sunday.

I’m grateful that I happened to be on the spot when this toxic group arrived on Sunday. Kudos to the Chicago police for quickly taking action to keep them from exploiting the peaceful, prayerful, wonderfully diverse March for Life Chicago.

Editor’s note: This article first appeared at Pro-life Action League. It is reprinted here by permission of the author.