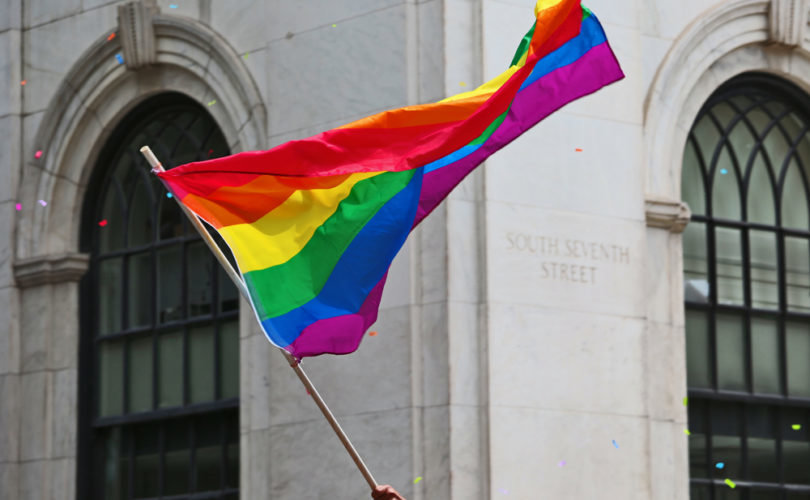 April 30, 2015 (HotAir.com) — On Tuesday, the Supreme Court heard what could be the defining case on whether marriage in America is legally restructured from a relationship between people of the opposite sex with an eye towards procreation to an “anything goes” system.

The media has responded as expected, with articles and reports brimming with support for changing marriage. Therefore, it is important to explicitly spell out a few realities of marriage and same-sex relationships.

Most importantly, marriage is between a man and a woman — no matter how much some wish it weren’t so. As Chief Justice John Roberts pointed out yesterday, this has been the definition for millennia, and as such allowing same-sex “marriage” does not expand marriage, but instead redefines it.

Why is marriage between a man and a woman? For starters, sexual intercourse is a reality for the survival of the human species, and lifelong marital fidelity is the best environment for procreation. Sexual relationships between people of the same sex cannot propagate the species, and even immoral child creation practices like IVF — which treats unborn children like chattel and often results in death for embryos — that are popular among same-sex couples require the reproductive assistance of both a man and a woman.

A number of judges have purported that laws against legal recognition of same-sex relationships consists of “animus” against homosexuals. Not only have these rulings erred in using the legally-loaded word “animus,” the simple fact is that opposition to changing the definition of marriage is based upon love — not the hate or bigotry alleged by gay activists and the media.

Perhaps nobody has said it as well as LifeSiteNews co-founder and Editor-in-Chief John-Henry Westen. (Disclosure: Westen is my boss.) Last week, speaking on a panel in D.C., Westen said that marriage supporters have love for people with same-sex attractions — but animus against same-sex sexual relationships.

According to Westen, the difference is key. Like Christ, who showed love to the adulterer by forgiving her sins and admonishing her to “go and sin no more,” criticism of same-sex relationships is based on concern for the physically, psychologically, and spiritually damaging consequences of same-sex sexual relationships.

This point about animus is not just important for the Supreme Court to understand. It also relates to the many laws across America that are putting Christians out of business.

Consider: If it is assumed that someone has hatred for homosexual persons, it is easy to justify laws that restrict their liberty. It is easy to put someone who finds same-sex relationships objectionable in the same category as racists — even though the latter is based upon animus against innate, unchanging traits, while opposition to same-sex “marriage” addresses relational choices.

This is an area where pro-family, pro-marriage activists failed to convince the public of their sincerity. This is in part due to the well-funded, well-organized gay activist groups, and it’s in part due to media bias. But it’s also due to the unwillingness of social conservatives to talk about the damaging realities of same-sex relationships, such as the high propensity of HIV/AIDS among gay men. As Westen pointed out, there has been virtual silence in the pulpits for decades, which has led to a general social squeamishness that has spread to most of the political leadership in this country.

The love that causes someone to tell another person that their relationship is harmful is akin to that of an admonishing parent. No parent would say love is shown by simply affirming every decision a child makes, and likewise, those who know the physical, psychological, and spiritual harm of same-sex relationships would be remiss to not show love for people in same-sex relationships, their children, and society as a whole.

Finally, despite the media’s proclamation that same-sex “marriage” will bring social peace, historical evidence makes it clear this is not the case. We’ve already seen the curtailing of liberty in Indiana, Colorado, California, and other states, where religious freedom and property rights are limited because less than four percent of society prefers state-sanctioned discrimination over free speech and freedom to disagree.

Around the world, such problems have included imposed curriculums in public and even private schools. In the Canadian province of Quebec, it is even illegal to teach the realities of marriage for parents who homeschool their children — which makes sense, since if you want to corrupt how people view proper sexuality, it’s best to start young.

Interestingly, none of my arguments against redefining marriage have had a religious foundation. Despite popular rumor, marriage can be defended through recognition of social, physical, psychological, and natural law sciences. And redefining it cannot.

Reprinted with permission from Hot Air.