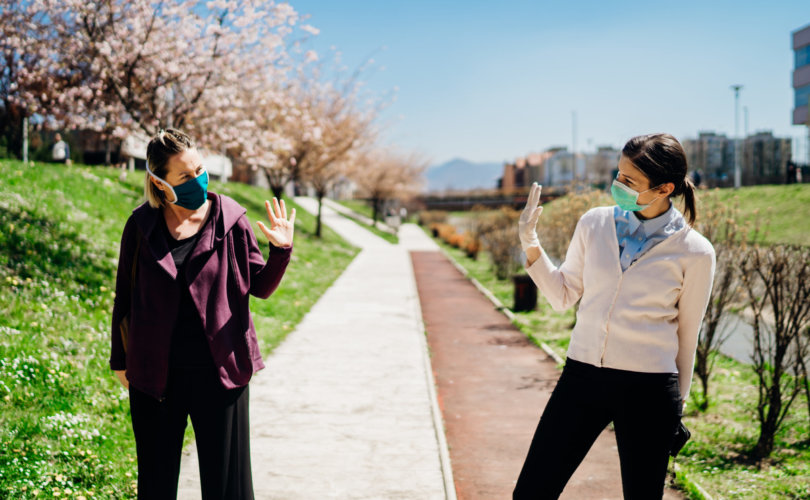 November 12, 2020 (LifeSiteNews) – The great mask controversy exploded on the scene as the COVID-19 crisis developed. Contrary to what might be expected, the demand for masking soon became a major issue. A simple matter of medical precaution turned into an ideological fight running along the same fault lines now polarizing the nation. Almost immediately (with reasonable medical exceptions), liberals wore masks, while most conservatives didn’t.

The science of the mask is secondary to the debate since conflicting expert medical opinions and guidelines have supported both sides at different times. Neither side usually succeeds in convincing the other. The passion of the debate indicates that the real issue is much deeper than just a piece of cloth or gauze.

The mandated use of the mask reflects two ways of life that were also manifested during the 2020 elections. On one side, a liberal mindset is concerned with enjoying the things of this world. On the other, the conservative perspective is open to a more restrained spiritual outlook.

COVID-19 provoked reactions that are out of character for the two opposing sides. It seems contradictory, but the liberal mindset tends to favor unrestraint, yet passionately adopted the most restrictive masks and face shields. Conservatives favor discipline yet demand to be free of the binding face covering that they find oppressive.

However, everything makes sense when considering the goals of the two sides.

Liberal desire to maintain life at all costs

The liberal mindset seeks out the enjoyment of life to its fullest. Thus, when life itself is threatened, such individuals are willing to forgo even the pleasures they adore. The rabid insistence on the mask indicates an extreme materialistic outlook that wants to maintain life at all costs.

It is a radical stance that values life so much that even the most remote possibility of contagion must be avoided through extreme self-masking. This opinion is not satisfied with self-constraint but insists that all chances of contagion by others must be brutally suppressed by mandated masking for all. When life is the supreme value, death is the greatest evil. All bases must be covered without exception.

A moral life and the permanent things

The conservative outlook is different. Its goal is a moral life that respects the spiritual values found in tradition, family relationships and religion. Thus, the enjoyment of life is not the supreme value. This perspective values what Russell Kirk referred to as “the permanent things,” those norms of courage, duty, courtesy, justice and charity that make life worth living and owe their existence and authority to a transcendent God.

Thus, for conservatives, there are values worth more than life itself. More important, there is life after death. There is no frantic effort to avoid all risks of death but rather the reasonable weighing of threats, taking measures that do not blot out the permanent things that are so necessary for life.

When this mentality is adopted, life takes on a warm human touch. There is not the brutal, inhumane aspect of liberal behavior that will not allow exceptions or attenuating circumstances. Conservatives rely upon social institutions for solutions, while the liberal mindset looks to government bureaucracies.

The religious element also allows individuals to have recourse to God in times of crisis. God answers prayers, and for Him, all things are possible. He gives meaning and purpose to life and its sufferings, especially in times of crisis. The secular mind is left with what Bertrand Russell called “the firm foundation of unyielding despair” in which life has no meaning, and all is a random jumble of events and facts. Individuals are left to their own devices to defend themselves against misfortune outside of God’s loving providence.

Thus, the masking controversy illustrates two different outlooks on life, one material and the other spiritual. The solutions are likewise divided since each side sees different supreme goods and evils.

Liberals are willing to admit that the danger of material contagion is something so dangerous that all measures must be taken to avoid the slightest suffering. They insist upon defending not just themselves but all of society against a perceived threat, even with the use of force. The lockdown is the preferred solution as a means to return to the full enjoyment of life.

The conservative perspective holds a contrary position that is routinely ignored by the left. Spiritual values must also be considered. Moral behavior will always favor the common good. Charity will put others before self and thus pave the way for a more humane treatment in the present crisis.

— Article continues below Petition —
PETITION: Say 'No' to using the U.S. military as guinea pigs for COVID vaccine
Show Petition Text
17335 have signed the petition.
Let's get to 17500!
Thank you for signing this petition!
Add your signature:
Show Petition Text

Alas, the same liberal mindset that insists upon lockdowns for everyone is loath to accept the conservative claim that the danger of spiritual contagion is also detrimental to society. Liberals would never accept the premise that society should defend itself against sins and immorality, which destroy the foundations of civil society.

Liberals claim that morality is a private matter and affects no one. Yet like a virus, moral actions impact all of society. The breakdown of family and community, for example, has devastated America on a scale that dwarfs the damage from COVID.

These moral points divide the nation, and the mask is merely their symbol. America needs to address the spiritual dimension of this controversy and move beyond the mask.

RELATED:
LifeSite petition against mandatory mask mandates at 56k signatures and counting
Physicians: ‘Masks don’t control viruses, they control you,’ ‘pandemic is over’
Masks and burqas are both dehumanizing and freedom-crushing
WATCH: Aggressive arrests in US and Australia for ‘crime’ of not wearing COVID masks