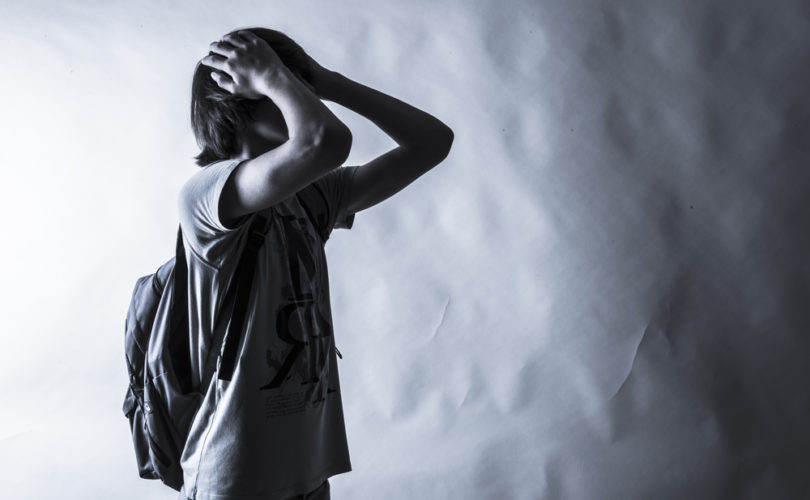 April 4, 2018 (The Public Discourse) – Billy B.'s story is not exceptional or unique. Childhood sexual abuse is an experience common to many of those who write me with regret about changing genders. Stories like his have filled my email inbox for the last ten years. That's precisely why I asked him if I could share it.

Billy says the question arose for him because he had been dressing up as a girl at home, putting on his sister's makeup and earrings out of curiosity. This can be benign behavior that children grow out of, but in some situations, it can evolve into an escape into a fantasy world.

Billy was a small skinny boy with a speech impediment. He was often teased by the other children. They would taunt him, saying “What did you say?” and “I can't understand you” when he would try to speak. Billy was too physically small and verbally challenged to fight back, so he swallowed his emotions and withdrew.

Billy longed to escape from his skinny body and speech difficulty. In his nightly bedtime prayers, he begged God to change him into a girl so that the other kids wouldn't make fun of him. But no one should conclude that Billy's choice of emotional hiding place made him a girl – or a “transgender child” as the experts now say; he was only a bullied little boy trying to cope.

In the summer after sixth grade, Billy's world came crashing down. At summer swimming league, Billy's new diving instructor targeted Billy for sexual abuse – abusers have a knack for picking on the weakest kids. Billy says, “The coach played with me.” In other words, the diving coach perpetrated a horrific crime against a vulnerable child.

Like the hundreds of female gymnasts who reluctantly came forward recently about the sexual abuse suffered years before at the hands of their sports doctor Larry Nassar, Billy was so traumatized that he did not tell anyone for a very long time. Billy pushed the emotions away with strenuous physical activity – bicycling, swimming, and running. Billy says he would do this “until the pain in my body was greater than the pain in my mind.” He also escaped by using his sister's makeup and earrings. He says that after the sexual abuse “I so very much hated my appendage” – that is, his male genitalia.

Billy is not the first who turned to a transgender identity to escape pain and trauma. In fact, Billy's story is not all that different than my own. And in the stories I receive from other regretful people who attempted transition, childhood sexual abuse abounds.

The shame and pain of being used by a sexual predator is beyond the imagination. Most abused kids push the feelings deep inside and shut out the memories. The pain, shame, guilt, and fear often keep them from telling anyone about the abuse until much later in life, if they ever do. Many sexual abuse victims – like Billy, me, and others who write to me – get swept up by LGBT therapists who suggest that the proper treatment is to start on powerful sex hormones followed by gender “affirming” surgery. The problem is that hormones and surgery will not be effective in providing long-term treatment for depression or other ailments caused by sexual trauma. Too many therapists rush to prescribe radical hormonal and surgical measures before diagnosing and treating the psychiatric disorders shown to coexist in the majority of gender dysphoric clients: depression, phobias, and adjustment disorders. Billy's story illustrates the importance of digging into why a person wants to surgically alter his or her body and not assuming that cross-dressing or role-playing as the opposite sex means that children need a sex change.

Like many men who identify as women and want their genitalia surgically removed, Billy was still attracted to women. In college, he fell in love with a woman, and the intensity of the feelings blew the hinges off the doors that had held his emotions locked up inside him. Overwhelmed, he asked his sister for advice, and she helped him find a sexuality therapist. Billy says, “I spent the first of many years trying to find out why I was this way.”

Unraveling the how and why of behavior shaped by traumatic events is never quick or easy work, especially early in the process. Billy told his therapist about the sexual abuse, but it wasn't a topic that they explored in depth. The emphasis was on Billy's feeling like a female. Billy read all the books he could find on the topic, and he became convinced that once he transitioned all would be okay. Affirmed by his therapists and confident in knowing what he had to do, he decided to surgically alter his male genitalia to a facsimile of a female's.

Billy's therapist referred him to a doctor in New Orleans who would provide hormone therapy to start the transition. Then came feminizing cosmetic and genital surgeries, dieting to lose muscle mass, and changing his name from Billy to Billie. He kept his employment, but it was not an easy transition. Billie had a high-flying career as an engineer.

But, in Billy's words, “All of the effort, pain and expense was for naught.” After living seven to eight years as a female, Billy started attending church. As he grew in his faith in God, he realized his trans-life was a lie he could not live any longer. Billy started thinking in earnest about detransitioning back to the man God had originally intended him to be.

So, after prayer, Billie approached the managers at work about becoming Billy. They were sympathetic, understanding, and supportive. Later, when the male hormones started making Billie look more male than female, the manager had to tell his co-workers about Billie's change back to Billy. Incredibly and wonderfully, they were supportive and several gave words of encouragement right there in the meeting. As Billy says, “God made the way!”

Billie successfully detransitioned back to Billy and met a beautiful lady who had two daughters from a previous marriage. They became friends, fell in love and got married in 2011.

When Billy first emailed me, his subject line was “I'm another,” meaning another of the growing number of people, young and old, who formerly identified as transgender and who have detransitioned back to living as their original sex. He is also “another” of the people diagnosed with gender dysphoria who were sexually abused at a young age and falsely assured by medical practitioners that their problems would go away with cross-sex hormones and surgery.

It's commendable to see the recent media attention on the “me too” movement for women who were sexually abused, but that's only half the story. Boys like Billy who were sexually abused by older males need to be included, too. Perhaps it is time for a new movement – “I'm another” – for people who suffered the double harm of being sexually abused and then surgically mutilated. They learn the hard way, as Billy puts it, that it was “all for naught,” after convincing everyone else to use the right names and pronouns and getting access to cross-gender bathrooms.

Billy says, “I do have problems, but it's my choice of living a happy and productive life or let my problems get the best of me.” Billy says he has chosen to get his strength, comfort, and forgiveness from God through Jesus Christ and live with joy.

I work with people who contact me because they regret attempting to change their sex. With impressive self-awareness, they clearly articulate what triggered their identification as transgender. They can always point to some situation – often but not always sexual abuse – in their past that caused them to want to escape who they were and become someone else instead.

Most people who identify as transgender are suffering from any of a wide variety of undiagnosed comorbid disorders. Unfortunately, gender therapists too often affirm a trans identity by providing access to hormones and surgery while ignoring the underlying causes, which should be treated with sound, effective psychotherapy.

It's time for psychotherapists to seriously address the unique causes of each individual's gender dysphoria before encouraging them to pursue hormones and surgery.