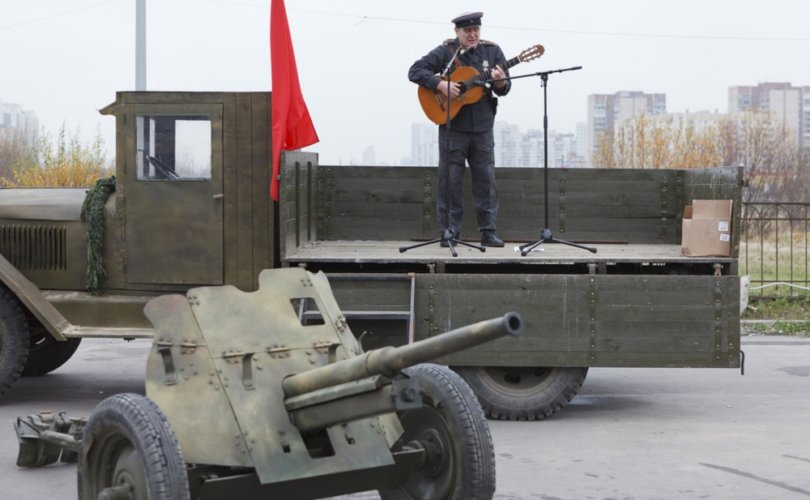 ORLANDO, Florida, December 2, 2019 (Liberty Counsel) — Between his campaign against President Gerald Ford in 1975–76 and his race against Jimmy Carter, Ronald Reagan delivered more than 1,000 radio broadcasts, including one in which he shared a story about Christmas in the Ukraine before and after communism.

In an effort to resist Christians, communist leaders secularized a favorite Ukrainian Christmas carol, “Nova Radist Stala” (Joyous News Has Come to Us). The original song began with these words: “The joyous news has come which never was before. Over a cave above a manger a bright star has lit the world, where Jesus was born from a virgin maiden…” Communists feared the public outcry that would follow a complete ban on Christmas, so they began to slowly secularize the holiday. The first rewrite of the song began: “The joyous news has come which never was before, a red star with five tails has brightly lit the world.” The second rewrite went further: “The joyous news has come which never was before. Long-awaited star of freedom lit the skies in October [the month of the Revolution]. Where formerly lived the kings and had the roots their nobles, there today with simple folks, Lenin's glory hovers.”

Christians in the former Soviet Union exhibited bravery and courage in confronting communism's anti-Christmas campaign. One person recalled how the young people would go out in the streets and sing Christmas carols, knowing that if police heard them, they would be arrested. In communist Romania, Rev. Geza Palffy, a Roman Catholic priest, delivered a sermon in 1983, protesting against the fact that December 25 had been declared a work day instead of a holiday. The next day he was arrested by secret police, beaten, imprisoned and died. Inside and outside the Iron Curtain, Ukrainians never stopped singing: “We beg you our Lord, we pray to you today. Grant us freedom, return glory to our Mother Ukraine.” Reagan ended his broadcast: “I guess we all hope their prayer is answered.” Indeed it was.

The secularization of Christmas is nothing new. Christianity Today in 2002 reported that in the Vietnamese province of Dak Lak, children's choirs were forbidden to sing “Silent Night.” From 1969 to 1997, Christmas was banned in Cuba.

In 2003, Liberty Counsel noticed a swell of anti-Christmas sentiment that was threatening to become a tsunami of unconstitutional censorship. Christmas decorations were packed away or renamed. People wanting to celebrate Christmas were told to sit down and be quiet. Employees, students and even senior citizens were banned from saying certain words or even wearing red and green! In response to this, Liberty Counsel launched the annual Friend or Foe Christmas Campaign which includes encouragement, education — and, if necessary, litigation — to guard Americans' freedom to celebrate Christmas.

Learn here about some of the numerous Christmas-related issues in which Liberty Counsel has been involved.

Liberty Counsel Founder and Chairman Mat Staver said, “The war against Christmas is nothing new. Repressive forces have always had the same goal — to first secularize and then to eliminate Christmas. We see it increasing every year as atheist groups try to ban any representation of Christmas. We must know our rights and never take our freedom for granted.”