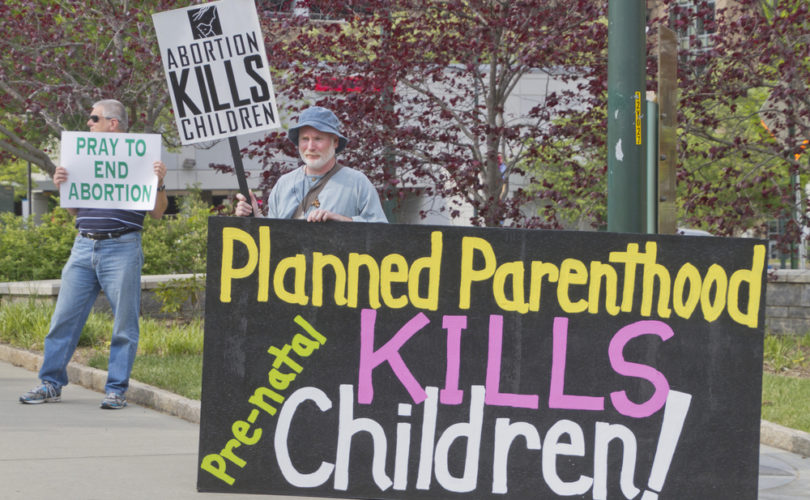 July 27, 2015 (Saynsumthn) — I am sitting at my desk, taking a moment of reflection over the past week, what I have witnessed, listened to and read. I am disturbed – even haunted and somehow – I am not surprised.

The news of Planned Parenthood’s grisly baby parts operation has been a daily source of news, social media posts, blogs, and videos. I have been caught up in it all, and now…I reflect.

I think about what is happening in this nation – of 42 years of legalized abortion on demand.

As I ponder what has taken place this last week, I am not shocked that babies are being chopped up and sold for parts like an old car in a junkyard.

I am not shocked, because every day, more than 3,000 beautifully formed, innocent babies are snuffed out in their mother’s wombs by abortion.

What shocks me more than hearing what groups like Planned Parenthood are doing with their remains is the lack of concern for these tiny humans on a daily basis. Yes, this shocks me.

I have witnessed the gruesomeness of abortion up close. I am one of the few who has held their broken bodies, their dismembered and bloodied corpses barely cold from being tossed in a dumpster outside an abortion clinic. I wrote about that day in detail here, and it is forever entrenched in my mind.

The smells, the images, the tears.

But I am also a student of history, and we have repeated this many times over. Think back to World War II and the Nazi experiments on the Jews. Think about how ISIS, today, callously slaughters women and children and Christians by the hundreds.

What has happened to America?

Why do we refuse to speak out about such atrocities until we are consumed with the dead corpses around us? Is the harvesting of aborted baby body parts so horrific that we are only now awakened to the pain and suffering of these tiny babies? Really?

Are we not moved to tears by the mere ripping apart, in early suction abortions, of their innocent arms, legs, lungs and kidneys on a daily basis? Can we not envision the horror of the abortionist’s knife grasping the limbs, torso, and head of the second trimester unborn child in a D&E abortion?

We have to ask ourselves these tough questions.

Which is more evil? An abortionist who finds ways to profit from every aspect of the bloody procedure or an apathetic sideliner who scolds him for unethical business practices instead of for his murderous actions? Have we become so accustomed to abortion that the real crime of it – the taking of a valuable human life, created in the image of God – is not the overall cause of our outrage?

I wholeheartedly condemn Planned Parenthood for the Mengele-like conduct portrayed in the Center for Medical Progress’ undercover videos, but I also condemn them for the taking of that same human life just seconds earlier.

In 1889, Gilbert Haven said it best when he described the reaction to the slavery of his day. In his National Sermons, Speeches, and Letters on Slavery and its war, Haven said:

We are so familiar with the word Slavery, that its real scope and character do not smite the eye with true horror. If this nation stood today, perfectly free from this iniquity, and could behold it approaching its shores, and demanding the sovereignty, we should rise up as one man against the hellish foe.… How horrible it’s sin, how horrible will be its punishment!

And in 1852, former slave Frederick Douglass described what should be our reaction today to the abortion trade:

I recently discussed the Church’s reaction to Hitler as depicted in the newspapers of the day. Although it is by no means a comprehensive study, in the articles I found, there are headlines noting the following:

Renate Bethge, daughter of an executed Christian resister to Hitler’s Nazi regime and niece of Dietrich Bonhoeffer, once stated, “When people know enough to know to learn more it will require some risk… then it is surprising how little people want to learn.”

Renate’s father, German theologian Eberhard Bethge, once stated, “There comes a point when you can only say yes or no and in this case: NO!” That time has come for America.

But sadly, just as in Germany, people will rarely speak out.

The time comes when silence is betrayal – that time has come for us…. Men do not easily assume the task of opposing the government’s policy…. Some of us who have already begun to break the silence of the night have found that the calling to speak is often the vocation of agony, but, we must speak.

It is easy to be outraged today, when gruesome descriptions of sci-fi like body parts are strewn across the television screens. But where are those same people when a pregnant woman needs a home or when a pro-life grandmother is accosted after standing alone in front of Planned Parenthood, crying out for the babies they murder?

Sadly, when it comes to Planned Parenthood, I feel that history is once again revealing the state of America. That state can be seen in the words of Holocaust survivor Eva Kor, whose most painful memories were placed into a story about her life, published in 2013. Kor says Hitler rose to power because good people said nothing:

The key word here is terrorist. “Terrorists have no respect for human life,” she said. “In Germany, not all Germans were Nazis. There were many good Germans — but nobody spoke up.”

I’d like to end by asking each one of us to examine our hearts.

There are really no “innocent bystanders” – we all know the truth about abortion and the truth about Planned Parenthood. We are at this point today because we have remained silent and refused to act against this tyranny towards the least of these, the unborn children.

Arthur Cochrane, who spent two years in Germany and became acquainted with the underground church during the Nazi regime, observed first-hand the reaction of those who ignored the plight of the Jews. “Those who stood strongest were first to confess their own guilt for not doing more,” he said.

We must do more!

Are we not all responsible for this ghoulish enterprise we now see visited upon us by Planned Parenthood? Responsible for not proclaiming the value of each preborn human person?

The answer to that question is YES! Now, what shall we do about it?

Reprinted with permission from Saynsumth's Blog.