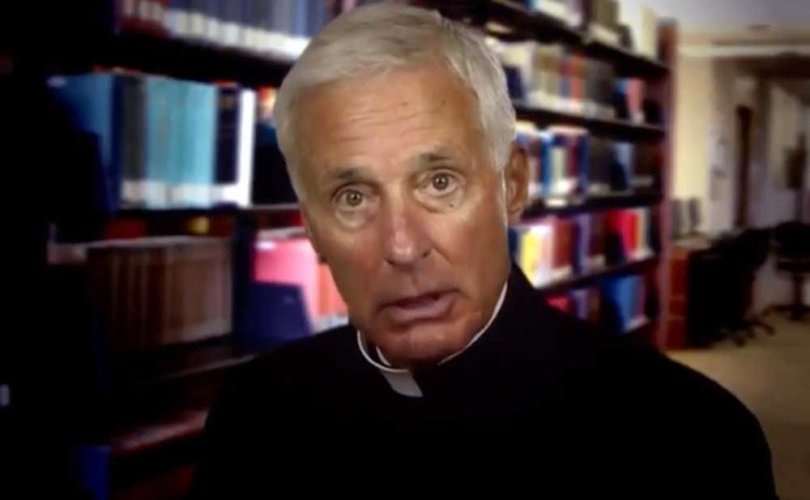 Fr. Michael Orsi warns about what is at stake in the upcoming election.

Editor's Note: Fr. Michael Orsi, in a previous video that went viral, warned Americans that they might not have a church to go to if they do not vote the right way this election. He follows here with another, more detailed warning about the high stakes in this election for life, faith and family and the encouraging responses of some of the youth that he has met.

October 25, 2016 (LifeSiteNews) — During the last debate, Hillary Clinton displayed her dubious understanding of the Supreme Court when she promised to appoint justices who “represent all of us.” As my friend and colleague, writer Bill Kassel, noted on his blog (billkassel.com), this idea is profoundly wrong. “Our Supreme Court justices should represent nothing but the Constitution.”

Of course, Hillary is hardly alone in her views. Kassel pointed out that wide acceptance of this false notion of a “Living Constitution” that’s endlessly alterable by a “representative” Supreme Court has brought us “ever-expanding government, destruction of the separation of powers, and steady erosion of freedom (think Barack Obama’s countless executive orders).”

I would add that it’s also brought abortion-on-demand for any reason — real or imagined — up to the moment of birth. Hillary herself has claimed that preborn human beings have no rights. And if we keep on this tack, we’ll soon be confronting the open practice of infanticide. There are already people who dismiss the distinction between inside and outside the womb. Princeton “ethicist” Peter Singer has asserted that a woman should have the right to kill her child up to 30 days after birth.

In Hillary Clinton’s case, her skewed perspective likely dates from her undergraduate days at Wellesley College. There she transitioned from a one-time “Goldwater Girl” into a committed Progressive, and wrote a glowing senior paper on radical theorist Saul Alinsky.

Her journey underscores the need for young people to gain a proper understanding of the Constitution and the political framework built upon it (which Clinton quite obviously did not). Sad to say, ideological trends on most college and university campuses are largely hostile to our Constitutional system. Moreover, there are plenty of Peter Singer-like “ethicists” in the academic world exploring the disposability of human life.

Such conditions do very little to promote intellectual maturity or moral clarity among the upcoming generation of leaders in training. Fortunately, not all young people’s minds are being warped. A group of students who assisted me in producing a pre-election video message have shown refreshingly clear thinking — in particular about the role and importance of the Supreme Court — which offers some reassurance during this harrowing election season.

A young man named Ambrose observed in our video that “we got where we are in this country with abortion rights because of the Roe v. Wade and Doe v. Bolton Supreme Court decisions.” He saw that nominating “solid conservatives” is the only way to regain any “real ground” in the pro-life struggle.

This view was echoed by a young lady name Renate, who also understood that the winning candidate will not only become our next President, but will fill a host of positions that “greatly weight on my future and your future, especially in our stance on abortion.”

For her colleague, Corrine, distinctions between the two current candidates could not be more obvious. “You can really tell the character of a person by who they surround themselves with,” she asserted. “In this election in particular we’re looking at two very extreme ends of the spectrum — one very pro-abortion platform with the Democratic Party, and one very pro-life platform with the Republican Party.”

A student named Ryan added that there are other crucial races as well, especially those that will decide control of the House and Senate, since these determine “how much of the new President’s agenda can get through.” Consequently, it’s “super-important that we work for getting pro-life candidates up and down the ballot elected this November,” he said.

These young people aren’t without their anxieties as they face an uncertain future. A student named Francesco expressed fear that we could “lose our constitutional rights” and “grow into an extremely tyrannical society where we have an over-powered government.”

But they aren’t brought low by such worries. To the contrary, they’re fired by a certain sense of mission which they feel has been given to their generation. A student named Katie expressed it well when she insisted that “as a Millennial fighting in the secular society I wish to vote for somebody who is pro-life, who is pro-family, who is pro-military, who is pro-Constitution, who is pro-Second Amendment.”

I find the attitude of these young people quite inspiring. They grasp the importance of this election — clearly one of the most important in our history — especially its implications for the future shape and actions of the Supreme Court. They haven’t bought into the Progressive delusions that set Hillary Clinton and so many others like her on the destructive path she’s pursued.

Rather, they’re committed to a positive future for our country within a true culture of life. May God bless them, and may we all follow their example.