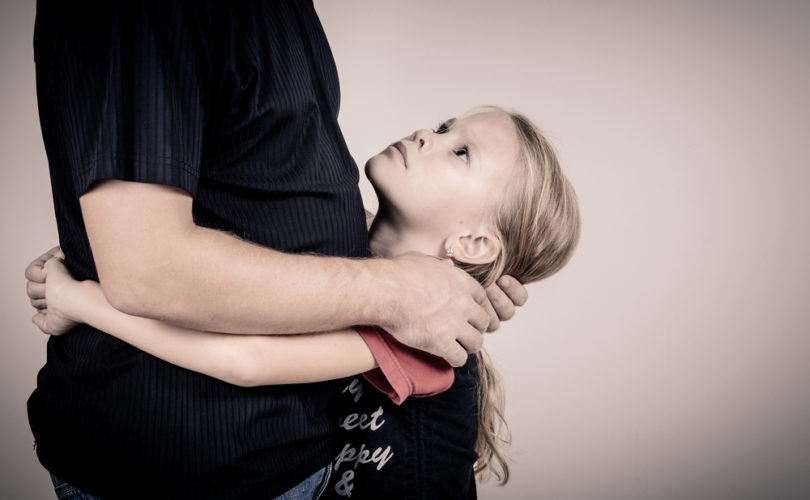 April 9, 2015 (ThePublicDiscourse.com) — What was your biggest concern when you were nine years old? Was it trying to memorize your multiplication tables? Was it that the school cafeteria might serve your least favorite vegetable at lunch? Perhaps it was something more serious; perhaps your parents were talking of getting divorced. My biggest concern at age nine was how to keep my daddy’s secret, the one he revealed to me as we sat alone on a hill near our home. In a sense, I lost my dad that day, when he told me he wanted to become a woman.

As I tried to process that revelation, he blindsided me with another. He told me he never wanted to have children. To him, my siblings and I were mistakes, because we did not align with his desires.

His confessions left me confused and hurt. After all, I just wanted a dad who would love and cherish me, who would make me feel special as a daughter. I felt rejected and abandoned by my own father. By the time I was eleven, my dad had begun to abuse me emotionally and sexually. Even so, I continued to keep my dad’s secret locked away, deep down in my heart.

My dad created a home environment that made me feel as if I was walking on pins and needles. His resentment over my possession of what he so deeply desired for himself—a woman’s body—turned into anger and abuse. As his desires intensified, he began to borrow my clothing. Many times I discovered my underclothes and tops under bathroom towels, or in the attic—often in places I had not been. I learned to organize my clothes just so, in order to know if he had been in my dresser drawers. When I confirmed that he’d worn an article of my clothing, I simply could not bring myself to ever wear that item again.

As an adolescent, I had to be careful about how I dressed. I always had to ask myself how he would react to my outfit. Would it make him so envious that he’d “borrow” it (without my consent, of course)? I began to hate my body. It was a constant reminder of what my father wanted to become. When I began to wear makeup, I had to block out the images I had of him applying makeup or eye shadow or lipstick. He was destroying my desire to become a woman.

I looked elsewhere for comfort. Attending school dances and overnights at friends’ homes gave me opportunities to seek some emotional escape through alcohol. Even on school days, a friend and I sometimes met in a school restroom to share bottles of Jack Daniel's. I desperately tried to fit in, but the truth is I was hurting.

I was so hungry to have my father’s love and attention that I tried to fill that void in other ways. I had thirteen boyfriends in seventh grade alone. I also tried, futilely, to soothe my hurting heart with alcohol. By age fifteen, I was struggling with my own sexuality and gender. I began to seriously consider taking drugs, but God had another plan. He sent a new friend, named Mark, into my life. Mark always treated me with respect and a genuinely caring heart—the very things I so desperately wanted but missed from my dad.

Eager to escape my home environment in my teens, I spent more and more time with Mark, usually at his home, where I saw how a real father cares for his children. Mark’s father reminded me of my uncle. These were homes—Mark’s and my uncle’s—where children felt comfortable, loved in a wholesome way. The more I experienced in loving homes like Mark’s, the more certain I became that my desires for such a home life were right and possible. My home was not right. That grieved me, but I’d gained hope that a good family life was achievable.

As high school graduation approached, I had to start planning for my future. I considered entering the military; I’d be able to travel and escape my home life. But instead, I fell in love with Mark, and he asked me to marry him. I’d be part of a real family, and Mark and I would start our own real family—one in which our children would be comfortable just being kids.

On my wedding day, dressed in the gown my mother sewed for me, and with the guests seated in the church sanctuary, my dad and I were alone at the end of the hall, waiting to walk down the aisle. He looked me in the eye and said, “I wish it were me in that dress.”

I kept my eyes on Mark as I walked down the aisle, knowing I was about to escape my father’s horrible influences. Through Mark, I witnessed the love of Christ, not only for me, but also for my dad. Mark was never hateful toward my dad in any way. Instead, he understood that my dad needed the healthy love and companionship of grounded, responsible men—men who knew and lived out what a husband and father should be. Sadly, my dad rejected those healthy relationships. But my relationship with my loving, responsible husband brought me healing.

Although Mark and I lived in our own home, we often returned to comfort my mother in her distress over the troubles my father created with his bizarre behaviors and periodic lavish spending sprees. Mom’s migraines and general weariness took a toll on her. She decided to retire from her job, leaving Dad as the sole breadwinner. I suspect that responsibility pushed Dad over the edge. Not too long after Mom’s retirement, he openly declared his intention to abandon her and pursue his new lifestyle. He then did so, leaving her nearly penniless and saddled with debt.

Thirteen years later, I was informed that my dad had cancer and his days were numbered. When I learned that he was trying to reach out to his family, I was upset with him. Who did he think he was, deserting us and then, as his death approached, looking to us for love and comfort? Even so, I grieved, knowing that my dream of my dad coming back into our family as a true husband, father, and grandfather was about to die.

I visited my dad often in the hospital during his last months. Seeing him in a lady’s nightgown and slippers was difficult, as was seeing all the teddy bears in his room. The nurses called Dad by feminine pronouns, or by his chosen name: “Becky.” When they did, I corrected them. I said “him,” “he,” or “my dad.” I looked at my dad with sorrow as I saw what his choices had done to him. As I exited following one visit, I made the mistake of looking back. Dad was removing his bra.

I was not surprised to learn after Dad’s passing that he’d been in a homosexual relationship. I remembered, then, the way he had looked at my boyfriends. As a child, I’d done my best to ignore this. It was difficult enough to deal with the idea that he believed he was a woman.

All those years I’d hungered for a real dad, not for a second mom. But I did have a real mother, and she taught me about a mother’s love. She taught me not to give up on life. From her, I learned the importance of persevering under the direst situations life would present. Her strong faith in God got her through. I brought those teachings into my children’s lives. I was fortunate to observe healthy father-daughter relationships through my mom’s side of the family.

Today’s culture proclaims that a person who chooses to change gender is being honest and courageous—true to his or her nature. Truth? Truth is what aligns with reality, and the reality is my dad was abused as a child. He had emotional issues, anger issues, and obsessive behaviors. It’s no surprise that he chose to escape into a different identity. The truth is that aberrant behaviors hurt families. And those hurts have ripple effects. The “reality” TV shows that portray transgenderism as the new frontier in human freedom and self-fulfillment are not telling the whole story. I know from experience.

I know I speak for others who have undergone similarly tragic childhoods when I say that I pray the Supreme Court will seriously consider the six amicus briefs submitted by the children of LGBT parents. We are united in believing that the healthiest foundation for any child is with a father and a mother. Please, take the opportunity to learn from the impact on the real lives of children. We may be among the first, but we will not be the last to stand up and speak out.