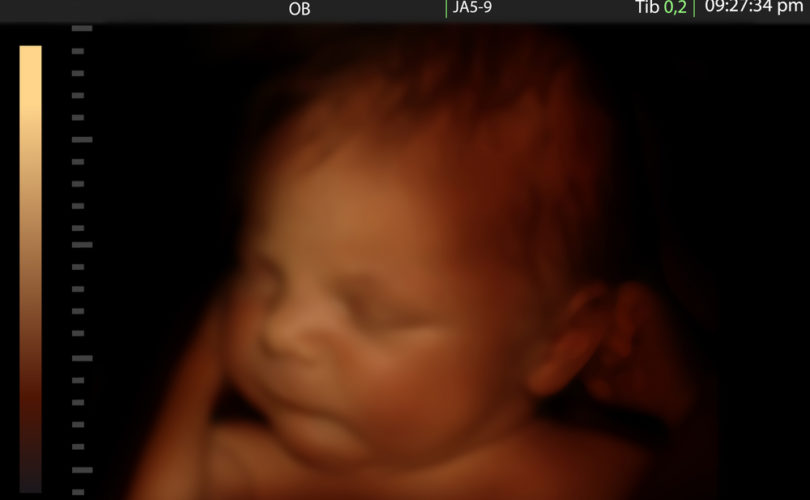 "There the baby was, sucking on a thumb. Beautiful. Perfect. Saved." (Stock photo)

January 20, 2016 (Bound4Life) — Weeks ago, I walked into our crisis pregnancy center and witnessed a miracle. I have been volunteering as a counselor for over 7 years now and never before have I seen this. I was honored to see God’s handiwork up close—watching the face and eyes of the woman who received a redemptive gift.

If you aren’t familiar with the abortion pill RU-486, I would like to introduce you before going any further. RU-486 is not a contraceptive. RU-486 kills an unborn baby (typically within 5-7 weeks of conception) whose heart has already begun to beat.

“Ummm, yes!” I thought. “Please let me lay eyes on this miracle baby and never forget.” There the baby was, sucking on a thumb. Beautiful. Perfect. Saved.

RU-486 is an artificial steroid that interferes with the action of progesterone, a hormone crucial to the early progress of pregnancy. Progesterone stimulates the increased development of the uterine lining, which nourishes the developing child. It also suppresses normal uterine contractions, which could dislodge the child implanted and growing on the wall of the mother’s womb.

This abortion-inducing procedure RU-486 fills the chemical receptor sites normally reserved for progesterone and blocks the progesterone signal. Failing to receive that signal, a woman’s body shuts down the preparation of the uterus and initiates the menstrual process.

The pre-born child, deprived of necessary nutrients, starves to death.

The baby’s heart—which has already begun to beat at least since 4 weeks old—stops beating. This is the only purpose for which the sponsor of RU-486 ever sought U.S. government approval: the stopping of a human heart. The baby then detaches and is swept out of the body along with the decayed uterine lining.

But that’s not all. A chemical abortion via RU-486 involves a second drug, misoprostol. By itself, RU-486 is able to induce an abortion only between 64% and 85% of the time—a percentage abortifacient researchers consider inadequate for general clinical use.

So two days after taking RU-486, a woman takes a prostaglandin, usually misoprostol, to induce powerful uterine contractions to expel the baby’s shrunken corpse. What does this part of the two-part pill abortion mean to the woman’s body? You will have severely heavy bleeding, nausea, vomiting and painful uterine contractions before and after the baby exits the body.

TIME Magazine describes this as “A painful, messy, and protracted” process. In its trial testing, two percent of women hemorrhaged while more than 1 in 100 required hospitalization. And this was when RU-486 was under constant trial supervision. Complications greatly increase when the woman is given the pills at abortion centers and sent home with instructions—no supervision and no follow up.

Can they really call this health care? (Let it be noted: Surgical abortions, though completely different in procedure, are just as dangerous to undergo.)

Having explained RU-486 and its process, let’s move on to that incredible evening at the crisis pregnancy center. In walks a young woman who had discovered she was testing positive on her home pregnancy test. She came into our clinic to follow-up and make sure the tests were correct.

She thought she felt movement inside of her, but wasn’t so sure it wasn’t in her head. She explained she had taken an RU-486 abortion pill some months prior and thought she might be imagining a baby moving. We naturally assumed that perhaps she was pregnant again, as a woman’s chance of pregnancy after a womb-loss is high.

She was tested and, sure enough, she was positive for pregnancy. I prayed as we waited to find out what was going on. The nurse took her into the ultrasound room to check her womb, since her claims of movement had left us stunned. Long after the clinic hours were passed, they emerged from the ultrasound room.

In her hand were 5×4 photos; I had to hold back my tears. The smile on her face was hard to miss, and I asked her how it went. She joyfully told me that she was 21 weeks pregnant and then asked me if I wanted to see. Ummm, yes! I thought. Please let me lay eyes on this miracle baby and never forget. There the baby was, sucking on a thumb. Beautiful. Perfect. Saved.

She was relieved and began telling me her crazy journey the last few months and how this had to have happened for a reason. I echoed, “God protected your baby. This is a miracle from Him.”

The young woman, who had only a few months prior decided to end her baby’s life, was now telling me she was going to decide whether to give the gift of adoption or parent. And she added that she would tell everyone never to take RU-486—it was traumatic and painful.

Asking her about that experience, I learned that she had visited the Tuscaloosa abortion center: West Alabama Women’s Center, Inc. They had given her the RU-486 pills and sent her home. The only information they gave her was that “there would be some bleeding and cramping.” She experienced severe bleeding and pain for days.

Did I mention there was no follow-up or continued care given by West Alabama Women’s Center? None. Thankfully due to their procedural negligence, she went on with a miracle pregnancy. However, many women suffer near-death hospitalizations due to this same negligence.

I’ve prayed outside this same abortion center before. While we were praying there, a song my husband and I had written from Psalm 27:5-6 came to my mind. It was written from the perspective of the baby in the womb facing their death by abortion:

“For He will conceal me there when troubles come; He will hide me in His sanctuary. He will place me out of reach on a high rock. Then I will hold my head high above my enemies who surround me.”

That prayer and that song came to my mind as I meditated on God saving this miracle baby. I feel a confidence in my soul that God honored those prayers to Him outside that abortion center. And I was blessed to see the living fruit!

Another incredible part of this miracle was that the young woman came in with a friend, who was also testing positive for pregnancy and was abortion-minded. After seeing her friend’s live ultrasound, she decided to keep her baby! She said that she couldn’t wait to see her baby, too.

I am privileged and humbled to see God’s redemptive plan for these women, as I’ve never witnessed before. God’s plans for us and our families cannot be controlled like we so naively think. Ever so often, He will reach beyond our own limiting perspectives and fill our ill-thought-out decisions with His grace and mercy—His Sovereignty cannot be thwarted. I’m so thankful for a loving Heavenly Father who moves in the midst of our desperate sin.

Her smile was evidence of the healing power of life. Her smile was proof of relief. And her smile was a confirmation of the beautiful choices that are now brilliantly before her.

Note: If you have recently started the RU-486 process within the last 48 hours, there is an effective process for reversing the abortion. Medical professionals are standing by at (877) 558-0333 or find more information at AbortionPillReversal.com.

Since 2008, Natalie Brumfield has served as Birmingham chapter leader for Bound4LIFE – a grassroots movement to pray for the ending of abortion and for revival worldwide. She works as children's director at her local church and volunteers at a local pregnancy care center. Natalie and her husband Matthew live in Birmingham, Alabama and love being foster parents. Reprinted with permission from Bound4Life.