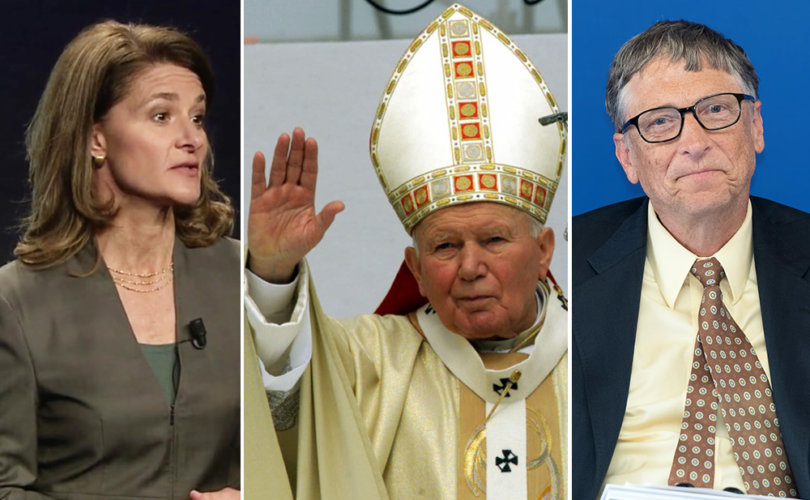 Melinda Gates version of Catholicism, given what she and her husband Bill are doing, is radically opposed to the authentic Catholicism taught by St. Pope John Paul II in Veritatis Splendor.

I appeal to you, brethren, to take note of those who create dissensions and difficulties, in opposition to the doctrine which you have been taught; avoid them. For such persons do not serve our Lord Christ, but their own appetites, and by fair and flattering words they deceive the hearts of the simple minded. (Romans 16:17-18)

February 17, 2017 (HLI.org) – At the heart of the Culture of Death is the rejection of God and His plan for the flourishing and salvation of those who love Him. Though this can take many forms, one that we are particularly concerned with is dissent from His teaching on the sacredness and dignity of human life.

Recently, Melinda Gates, who publicly dissents from Catholic teaching on contraception yet is often described as a fervent Catholic, attributed her success in life to contraception:

It’s no accident that my three kids were born three years apart… or that I didn’t have my first child until I’d finished graduate school and devoted a decade to my career at Microsoft… My family, my career, my life as I know it are all the direct result of contraceptives.

This comes as her husband, Bill Gates, with whom she co-chairs their eponymous multibillion dollar foundation, criticizes the Trump administration’s reinstatement and expansion of the Mexico City Policy. This is the policy that prevents recipients of U.S. foreign aid grants from preventing or performing abortion. While the Gates Foundation does some work that is quite laudable and apparently has a policy that it does not directly fund abortion, it very clearly does fund the world’s largest promoters and committers of abortion, ostensibly for their other “family planning” efforts. And now the Gates Foundation is on record defending those who will not abandon abortion in order to receive federal funds. This is both an admission of the complete moral rot of so much of the “international health community” that considers abortion a legitimate “health” concern, and the end of the claim that the Gates Foundation does not support abortion and its promoters.

To be clear, I do not mean to portray Mrs. Gates as an “enemy,” or to judge her soul—something I couldn’t do even if I wanted to. By many accounts she is sincere in her intentions to help poor and disempowered women in the developing world. It is how these “intentions” are formed in Catholics that I’m concerned with here.

A dissenter passionately believes that the final arbiter of any decision is one’s conscience, regardless of whether or not his conscience is properly formed. It is sad and scandalous that we have heard bishops of late seem to affirm the same error, as if the formation of a person’s conscience is irrelevant. Of course, if the Church were to accept this definition of conscience, we would fall into pure moral relativism. On this view, how does one challenge, for example, our new president’s actions on immigration as wrong if he is acting in accord with his conscience and only intends good things?

The Catholic Church teaches that certain actions are “intrinsically evil,” which means that no man-made law or statement from a Catholic bishop can make these actions morally good. As Lumen Gentium 12 reminds us, Church teaching concerning faith and morals are, “not the mere word of men, but truly the word of God.” Those who claim that following their conscience allows them to choose evil in order to obtain some good are wrong.

The correct understanding between freedom and truth with regard to human actions was outlined by Pope Saint John Paul II in his encyclical Veritatis Splendor. Since the point is important, I will quote it at length:

Consequently in the “practical judgment of conscience,” which imposes on the person the obligation to perform a given act, “the link between freedom and truth is made manifest.” Precisely for this reason conscience expresses itself in acts of “judgment” which reflect the truth about the good, and not in arbitrary “decisions.” The maturity and responsibility of these judgments ― and, when all is said and done, of the individual who is their subject ― are not measured by the liberation of the conscience from objective truth, in favor of an alleged autonomy in personal decisions, but, on the contrary, by an insisted search for truth and by allowing oneself to be guided by that truth in one’s actions. Christians have a great help for the formation of conscience “in the Church and her Magisterium.” As the Council affirms: “In forming their consciences the Christian faithful must give careful attention to the sacred and certain teaching of the Church. For the Catholic Church is by the will of Christ the teacher of truth. Her charge is to announce and teach authentically that truth which is Christ, and at the same time with her authority to declare and confirm the principles of the moral order which derive from human nature itself.” It follows that the authority of the Church, when she pronounces on moral questions, in no way undermines the freedom of conscience of Christians. [n. 61-62]

To the Catholic who knows his faith, Church teaching is indeed in accord with freedom that is directed toward our true flourishing. If only more priests and bishops understood and proclaimed this basic truth.

One could possibly ignore or even dismiss Mrs. Gates as one of many Catholics claiming to be in good standing, but we cannot ignore the incredible influence she and her husband have on public health priorities and policy. Their foundation leads Family Planning 2020, a coalition of government agencies, pharmaceutical corporations and other entities that seeks to get 120 million women to start using contraception in the developing world by 2020. The foundation gave one billion dollars to the effort.

Since she became a major public figure, Mrs. Gates has never shied from her dissent from Catholic teaching on contraception. As with others who took up the population control mantle from eugenicist Margaret Sanger, she believes that contraception is essential to alleviating poverty and empowering women. She claims to understand the plight of poor women and speak for them when she says their greatest need is birth control. Mrs. Gates has this authority due to her many trips to Africa and Asia, where she meets poor women introduced to her by her foundation’s grant recipients, and not surprisingly is told what her grant recipients and Mrs. Gates want to hear.

Yet she ignores the polls that find that contraception is far down the list of concerns of African women, behind better education, access to water and better hospitals, and improved legal protections. She never addresses the many studies that show the harm done to women’s health by her preferred method of contraception, the injectable Depo provera, which has been condemned even by many pro-contraception women’s health advocates.

In short, she ignores not only Church teaching, she ignores the mountains of evidence saying that her preferred remedy to women’s poverty and disempowerment will actually harm many of them and leave them worse off. How many stories can be told by women who have become ill as a consequence of these drugs? How many of these women, after taking contraception, cannot conceive or have serious gynecological problems? Where are Mrs. Gates, her foundation, the NGOs who so readily signed up for the distribution of these contraceptives, when these same women need medical care as the negative consequences of their use unfold?

We should not be surprised that the loving God who designed us would give us a moral authority to steer us away from those things that are harmful to our bodies and our souls, but which are promoted as if they are the solution to problems.

Why not endorse and teach Natural Fertility Regulation, which, when used with an attitude of trust in God, is both healthy and effective? One supposes that her Family Planning 2020 partners, Pfizer Pharmaceuticals and Planned Parenthood, are less than supportive of the idea.

Ignoring the dissent of public figures is not compassionate. It is not pastoral or just. It can in fact be catastrophic as the good intentions of powerful and poorly formed Catholics lay waste to communities and even nations that are most vulnerable to the “help” offered by the powerful. God gave the Catholic Church to the world so that people may flourish here and find eternal life with Him, our true destiny. It wasn’t to find acceptance in the corridors of power. When the Church and her shepherds are what they were created to be, amazing things happen. Let’s be unafraid as we tell the world the whole truth, in love.

This article was originally posted on the Human Life International website and is re-published with permission.

Melinda Gates: ‘I have really gone all in on family planning’