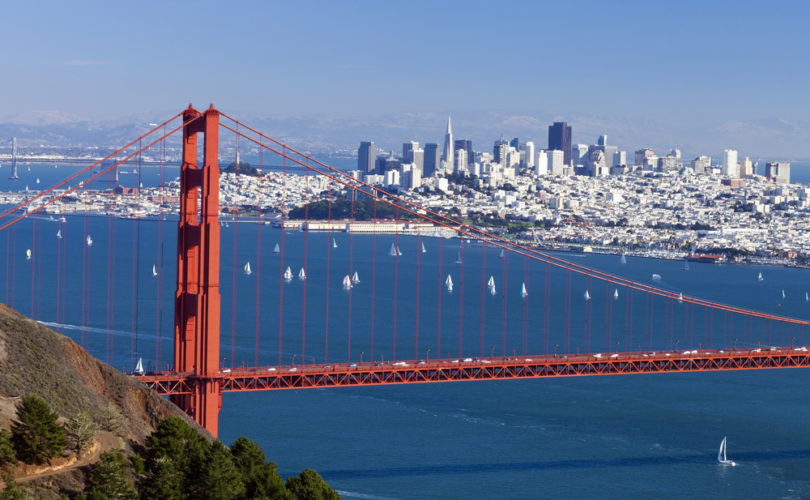 April 20, 2015 (CardinalNewmanSociety.org) — Proclaiming their values of tolerance, inclusion, and non-judgment, 100 “prominent” San Francisco Catholics last week took out a full-page ad in the newspaper to tell the Pope and the world that they will not tolerate or include and indeed soundly condemn the archbishop of San Francisco.

His crime? Following Canon law, which requires him to ensure that “Instruction and education in a Catholic school must be based on the principles of Catholic doctrine, and the teachers must be outstanding in true doctrine and uprightness of life” (Canon Law, 803, § 2). He is also condemned for following the teachings of the U.S. Bishops, who have consistently taught that “all members of the faculty, at least by their example, are an integral part of the process of religious education…. Teachers’ life style and character are as important as their professional credentials” (1976, Teach Them, p. 7), and the bishops’ National Directory for Catechesis which requires Catholic school leaders to “Recruit teachers who are practicing Catholics, who can understand and accept the teachings of the Catholic Church and the moral demands of the gospel, and who can contribute to the achievement of the school’s Catholic identity and apostolic goals” (2005, National Directory for Catechesis, p. 231, 233).

Archbishop Cordileone and all U.S. bishops are bound by Canon law and Church teaching to do what he is doing: ensuring that Catholic schools in his diocese are Catholic. And indeed, he is not alone in this effort. He is joined by similar significant efforts underway by bishops in the dioceses of Cincinnati, Cleveland, Santa Rosa, Honolulu and Oakland, among others.  He is just currently the biggest target in a bastion of the fully-empowered tyrannical Left who will not tolerate any deviance from their liberal orthodoxy.

The sexual dogmas of the liberal orthodoxy are so confused and so consuming that any other understanding of the nature and purpose of human sexuality and marriage, even those views held by the vast majority of humanity throughout all ages, must be condemned and ultimately silenced. To state the clear and unequivocal Catholic teaching that the only proper and moral exercise of the marital act is exclusively in the context of a committed natural marriage in the service of both love and life is viewed by some as a type of hate crime.

These “anti-bully” bullies are doing what bullies do. They are seeking to gain in their own social status and self-concept by belittling, shaming and humiliating someone outside their local social norm. As the authors admit, the social sexual norms in the Bay Area are completely supportive of sex outside of natural marriage. Those who control the culture are dead set on humiliating and eliminating anyone who would not fully support their power and the status quo.

Many other dioceses have stipulations in their employee handbooks and in their contracts related to the need to uphold Catholic teachings in word and action as terms of employment. This is nothing very new. A challenge has occurred more recently, because of the rapid deterioration of social norms related to human sexuality, and because so many Catholics and Catholic school employees are so poorly catechized regarding human sexuality and complex but critical human life issues.

It is possible that some employees can unwittingly jeopardize their employment by running afoul of the expectations of their employment agreements. In a preemptive effort to avoid such suffering and embarrassment, a number of dioceses are striving to clarify and publicize these expectations of Catholic teachers in a spirit of truth and charity and to ensure that folks do not unwittingly join in an evangelical enterprise they cannot advance, support or—even worse—work against. Charity demands clarity and truth. Justice to one’s employees demands clarity and truth as well. Justice to ones’ employer demands that one should not work against his interests or intent. The more clearly we can all be about what we intend and believe, the better.

It is also important in a pluralistic society, where we should not all have to agree with each other on complex issues and matters of faith, that we leave room for dissent and marginalized thinking and thinkers—especially in the realm of religious thought. Our country was founded by religious dissidents whose religious views and practices did not fit in with the dominant cultures and beliefs of the powerful in their home countries. They came here seeking freedom of religion—freedom to practice their faith as they saw fit without governmental persecution. Archbishop Cordileone has sought no retribution or even disparagement against those in San Francisco who clearly disagree with the Church; he only seeks to protect his right not to hire them to do the work of the Church, a reasonable and just freedom.

While these wayward Catholics seek to drive their archbishop out of San Francisco in the name of the dominant culture, but not the Catholic faith, we must be aware that many more of us are endangered from attack as well in this rapidly declining culture. These same bullies demanding that Archbishop Cordileone lose his job as a bishop for teaching the truths of the Catholic faith will next deem it critical that Catholics lose their jobs for agreeing with him and the Church.