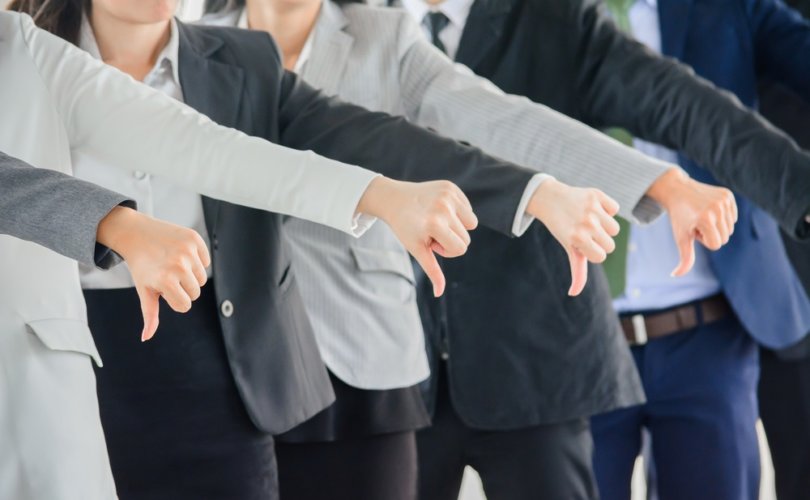 September 1, 2020 (American Thinker) — Recently, we learned that Sandia National Laboratories, one of only three National Nuclear Security Administration research and development laboratories in the United States, was mandating that its white, male executives attend anti-white training sessions. Since then, a whistleblower has emerged, describing in detail the anti-white “critical race theory” that Sandia's management is foisting on employees at all levels, even though these racial attacks in the material manifestly violate federal law.

In mid-August, Christopher Rufo published a Twitter thread about a blatantly anti-white seminar at Sandia. To understand how wrong that seminar was, you need to know that Sandia, as a taxpayer-funded contractor for the U.S. Department of Energy's National Nuclear Security Administration, must comply with federal anti-discrimination regulations. Thus, Executive Order 11246 Subpart B, sec. 202 states in relevant part:

Last I looked, white employees ticked off two boxes in the protected classes above: race and color.

Casey Peterson, an electrical engineer, has been unhappy about the direction that Sandia is taking. The seminar described in Rufo's Twitter thread — as well as the fact that it was required only for white men — struck him as discriminatory. Moreover, Peterson believes that critical race theory is a dangerous form of anti-white discrimination premised on false facts and crackpot theories.

Peterson did something audacious in today's environment: he pushed back hard, creating a lengthy, detailed, factually supported video challenging the critical race theory that forms the basis of Sandia's undoubtedly illegally and contractually violative race-based discrimination. Christopher Rufo picks up the story:

There is a civil war erupting at @SandiaLabs.

Following my investigation, a dissident electrical engineer named Casey Peterson emailed all 16,000 employees denouncing critical race theory in the lab and hoping to spark a rebellion against Sandia executives.

On Tuesday, Peterson made a YouTube video “pushing back back on the narrative of modern systemic racism and white privilege.”

The video quickly hit 10,000 views within the labs and dozens of Sandia employees contacted Peterson to express support.

Within hours, Sandia executives dispatched a counterintelligence team to lock Peterson out of the network and scrub his communications from internal servers — which, via the Streisand Effect, made the video even more viral and sparked widespread unrest against Sandia executives.

By the afternoon, executives were panicking about the brewing rebellion, placed Peterson on paid administrative leave, and established a “security review board” to “evaluate whether [his] actions have comprised [sic] or posed a threat to Sandia computing and security systems.”

Peterson — who took a stand at grave risk to his career — says he is speaking on behalf of all of Sandia employees who are “scared to speak out” because of the lab's repressive culture. “If I get fired because of this,” Peterson says, “the fight does not end, it only intensifies.”

This is the first explicit rebellion against critical race theory in the federal government — and the coalition is growing. “We need to completely rip [critical race theory] out of Sandia root and stem,” Peterson says. “It is cancer and we need to get it out of the labs right now.”

Keep this in mind: Sandia Labs is a federally-funded research agency and designs America's nuclear weapons. Senator @HawleyMO and @SecBrouillette have launched an inspector general investigation, but Sandia executives have only accelerated their purge against conservatives.

Sandia executives face a decision-point: they can back down and Peterson's rebellion will notch an internal victory; or they can fire him and Peterson will become further evidence of Sandia's corrupt and repressive culture. In a sense, Peterson cannot lose.

According to multiple sources, the executives who have pushed the most toxic elements of critical race theory and race-segregated trainings are James Peerey, Dori Ellis, David White (he/him), and Mark Sellers. They must be investigated by the Inspector General.

Here's the bottom line: this is the first shot in the rebellion against critical race theory in the federal government. Casey Peterson has taken a courageous stand and the Inspector General must conduct a full investigation of Sandia Labs — and hold executives accountable.

We are opening up a multi-front war against critical race theory in the federal government: (1) investigative reporting to expose the truth; (2) internal rebellions to increase the pressure; (3) inspector general investigations; (4) laying the groundwork for an executive order.

It might take time, there might be losses, but we will achieve victory! Swords up!⚔️ Prayers up! ��

The lily-white executives appear to be committed to forcing critical race theory on their trapped employees. Therefore, we can expect that Peterson, who is currently on paid leave, will lose his job. Corporations, especially those with ties to the Deep State, know that whistleblower laws no longer protect people who do not advance progressive ideologies.

Looking ahead, if we find ourselves in Trump's America after November 3, Peterson will at least get justice eventually. However, if we're in Biden's America, the Petersons of this world will be silenced.