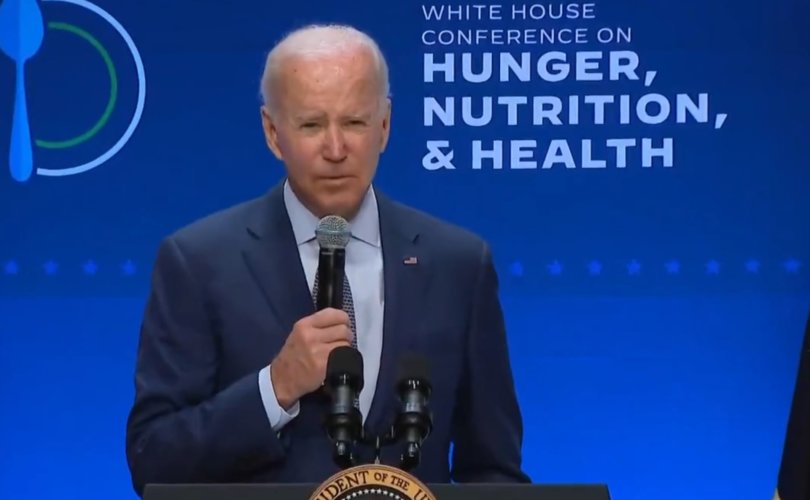 WASHINGTON, D.C. (LifeSiteNews) — The White House’s response to President Joe Biden’s clear confusion about why a dead Congresswoman was not at an event should raise serious concerns about how his team will mislead the American public.

“Representative Jackie, are you here? Where’s Jackie?” Biden asked during a Wednesday morning conference on food insecurity, in reference to the late Congresswoman Jackie Walorski (R-IN) who died in August in a car crash. “I thought she was going to be here.”

Biden’s confusion could be explained away – everyone makes mistakes. Or by his old age, a point even liberal National Public Radio raised in its coverage.

But White House Press Secretary Karine Jean-Pierre never said that Biden regretted his mistake – instead, she attempted to explain away the gaffe, even to mainstream media outlets, that Congresswoman Walorski was on the “top” of Biden’s “mind.”

“The president was naming the Congressional champions on this issue and was acknowledging her incredible work,” Jean-Pierre said in response to a question from ABC News correspondent Cecilia Vega. The press secretary said that Biden has several events coming up in honor of Walorski, including a bill signing with her name on it, “so of course she was on his mind, she was of top of mind for the president.”

Her refusal to simply say: “President Biden made a gaffe yesterday, people make mistakes, he regrets his error,” raises questions about how else the White House has and will mislead people in the future, particularly about the president’s mental acuity.

.@CeciliaVega: “What happened at the Hunger Event today? [Biden] appeared to look around…for…a member of Congress [Jackie Walorski] who passed away last month…What happened there?”

“He said, ‘Jackie, are you here? Where is Jackie? She must not be here,'” Vega asked as a follow-up.

“She was on top of mind,” Jean-Pierre responded, before repeating talking points about naming a clinic after the former congresswoman.

“I’m trying to get my head around the response. The late Congresswoman was top of mind for the president and her family was… here and that’s what he was thinking about? Why was he looking for her,” he asked, only for Jean-Pierre to reiterate that “I think people can understand… when someone is at top of mind,” before going back to talking about the conference being an “important event” about hunger.

CNN’s @Phil_Mattingly: “I’m trying to get my head around the response. [Walorski] was top of mind for [Biden] & her family was…here & that’s what he was thinking about? Why was he looking for her?”

KJP: “I think people can understand…when someone is at top of mind.” pic.twitter.com/Hy0MKWTamx

Steven Portnoy with CBS said he was “compelled” to ask again for the historical record what happened on Wednesday.

“Can you explain where the mistake was made? Did the President – was [he] confused? Was there something… in the teleprompter… he didn’t recognize? Can you just help us understand?” Portnoy asked, before the press secretary accused him of “jumping to a lot of conclusions.”

.@CBSNewsRadio‘s @StevenPortnoy: “Can you explain where the mistake was made? Did the President–was [he] confused? Was there something…in the teleprompter…he didn’t recognize? Can you just help us understand?”

KJP: “I mean, you’re jumping to a lot of conclusions” pic.twitter.com/rrvZyFKUJ0

Even The Washington Post could not ignore the issue. “I think we all totally get why she’s top of mind, you’ve made that case pretty effectively, but I think the confusing part is why if she and the family is top of mind, does the president think that she is living and in the room?” Matt Viser asked.

Again, the press secretary deflected by repeating “top of mind.”

“I don’t find that confusing, I mean I think many people can speak to sometimes, when you have someone top of mind, they are top of mind, exactly that,” she said. She then proceeded to say that when you put the flub “into the context, it’s not like it happened outside of context.”

“These moments of confusion are happening with increasing frequency,” an unidentified reporter said.

Mainstream media picked up on the press secretary’s frustrations at being pressed for basic answers. CNN reported that she “bristled” at the questions while the Associated Press reported she “struggle[d] to explain Biden[‘s] gaffe.”

Biden’s confusion is concerning – the White House obfuscation may be more so.