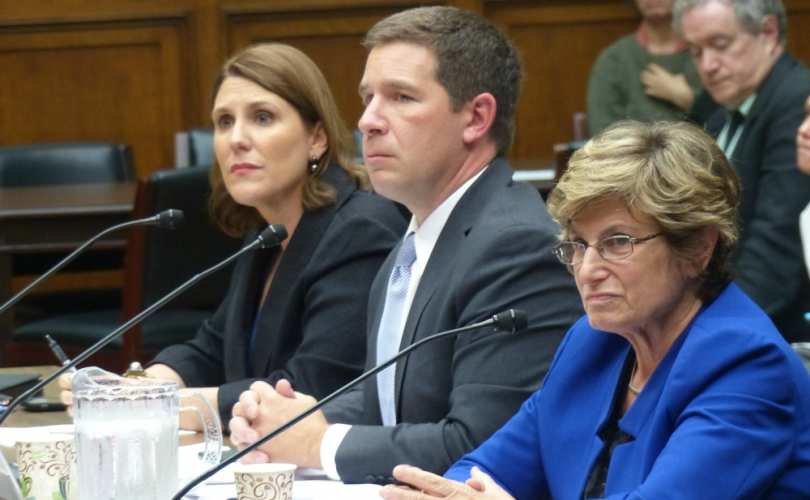 September 6, 2017 (Daily Signal) — When the elevator door opened in the lobby, my colleagues and I saw a man sitting, bleeding, surrounded by police.

We stared in silence as police yelled at us to get back upstairs. The elevator door quietly closed, and we returned to our fifth-floor office.

Up there, we hadn’t heard Floyd Corkins’ gunshot that hit our security guard, Leo Johnson — just the sudden rush and wail of police cars and ambulances filling our D.C. street.

Even after the scene in the lobby, it didn’t occur to us that the bleeding man was Leo, or that something had happened inside our own building.

Americans need an alternative to the mainstream media. But this can't be done alone.

We just assumed that someone had been injured on the street outside and was receiving medical attention in the lobby of the Family Research Council building, where our D.C. office for Alliance Defending Freedom was housed at the time.

Then we saw the first news reports. There was a shooter in our building.

That was just over five years ago. My colleagues and I now know that Corkins intended to kill us. Along with enough rounds of ammunition to do the job, he’d also brought a supply of Chick-fil-A sandwiches to stuff in our mouths, to mock our corpses.

Corkins said he chose our building after finding it listed on the Southern Poverty Law Center website, which labeled the Family Research Council a “hate group” (because of its support for the historic definition of marriage).

I don’t work for the Family Research Council, but Corkins didn’t know that. And had he made it past the lobby and into the elevator, my employment status wouldn’t have mattered.

Thankfully, Leo miraculously stopped him, saving our lives and dozens of others. (Corkins was later convicted of domestic terrorism.)

Because of Leo’s heroism, I never knew the danger I was in until it was over, allowing me to forget, from time to time, that the story could have been far more tragic.

Texts from my wife and colleagues seeing the same CNN story all expressed the same concern.

A list of KKK, neo-Nazi, and other violent groups could be a non-partisan service to the public. But that isn’t what the cash-infused Southern Poverty Law Center provides.

Instead, the Southern Poverty Law Center expressly acknowledges that its list is biased, focused on taking out groups it describes as the “American radical right” — which it defines broadly, smearing all its opponents equally.

Thus, under the guise of fighting “hate,” the Southern Poverty Law Center lumps together with Nazis and the KKK veterans, Catholics, Muslims who oppose terrorism, nuns, and now my own Alliance Defending Freedom.

Even left-of-center publications like The Atlantic have noted the expansive scope of the Southern Poverty Law Center’s list and the danger it may pose to Muslim activists speaking out against terrorism and for human rights.

The Southern Poverty Law Center is a living testament to Godwin’s Law: that given enough time, all arguments end with comparisons to Adolf Hitler.

One can disagree with Alliance Defending Freedom and its First Amendment positions, but they are demonstrably mainstream. My colleagues regularly argue and win precedent-setting victories that protect freedom of speech and religious freedom for all Americans.

In the last seven years, we have secured seven U.S. Supreme Court victories — the most recent being a 7-2 win in Trinity Lutheran Church of Columbia v. Comer.

My own role at Alliance Defending Freedom is as director of our Center for Academic Freedom. My team defends the free speech rights of students and faculty on campus. We’ve won 90 percent of our litigated cases over the last decade. That is not the track record of a “fringe” organization.

Floyd Corkins is not unique. Earlier this year, a mob inspired by Southern Poverty Law Center’s claims physically assaulted Charles Murray, a respected social scientist and author, when he answered an invitation to speak at Middlebury College in Vermont.

James Hodgkinson, who this summer attempted to assassinate several Republican congressmen — including Majority Whip Steve Scalise — was also a follower of the Southern Poverty Law Center.

There will be more like them. After the recent events in Charlottesville, a growing chorus of voices are embracing violence as a means of confronting ideological opponents.

The New York Times, The Washington Post, and other mainstream outlets have actually published editorials in support of diminishing free speech rights, and even forgiving or glorifying violence against “fascists.”

Many of these same media voices take pains to dismiss any comparison of Hitler and Nazism to, say, Joseph Stalin or communism, complaining that Nazis are uniquely evil. Yet the Southern Poverty Law Center has no problem lumping Nazis together with ordinary pro-family Christian policy and legal organizations like Alliance Defending Freedom.

If writers and publications of note are going to condone violence against racists, they should at least be particularly cautious in ascribing those labels. Alas, caution is not a hallmark of the Southern Poverty Law Center — or, increasingly, its media defenders.

We are a divided country. But surely we can disagree without losing sight of the humanity of those on the other side of the argument. (At Alliance Defending Freedom, we remind one another that we don’t have “enemies” — only opponents.)

While I don’t blame the Southern Poverty Law Center for the criminal actions of those inspired by its labels, it is high time the organization and its promoters acknowledged that their rhetoric is contributing to, not helping resolve, our coarsening discourse.

We can’t expect those who are easily provoked by the Southern Poverty Law Center’s propaganda to be more nuanced in their treatment of the organization’s targets than the organization itself—or the major news outlets that repeat it.

Both the Southern Poverty Law Center and the media who copy and paste its “hate group” list might want to consider whether they want to inspire another Floyd Corkins to commit an act of violence.

As one who remembers his bloody deed that day — and how much worse things could have been — I wouldn’t wish that outcome on even my worst opponent.