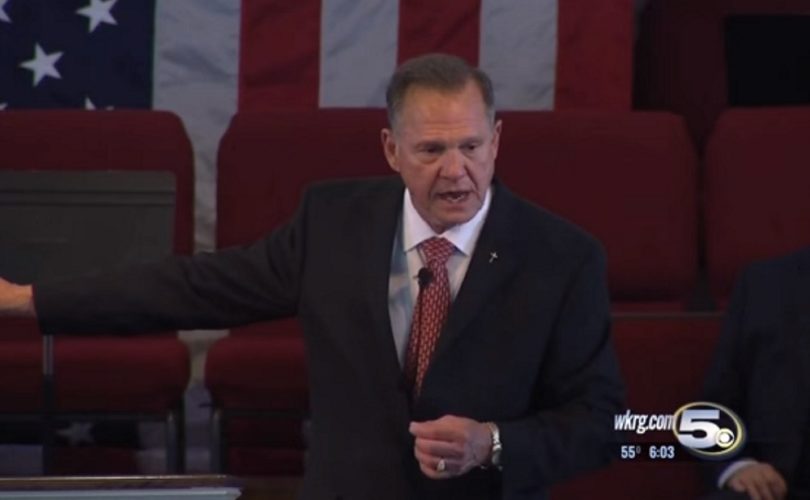 November 13, 2017 (LifeSiteNews) — Last Thursday, The Washington Post published an article accusing Judge Roy Moore of systematically targeting very young women and one girl for intimate relationships. Although only one of the accusers’ testimony would have constituted a crime, all of them are deeply troubling. Judge Roy Moore has unequivocally denied the allegations and has announced that he will sue The Washington Post for defamation.

I recently wrote an article for LifeSiteNews extolling the fruits of Judge Roy Moore’s public and professional career and predicted that, if elected, Roy Moore would be the nation’s most ardent defender of the right to life, family and religious liberty.

As I mentioned in that article, Judge Moore makes cosmopolitan elites of both parties very uncomfortable. If anyone running for office has a target on his back, it is Judge Roy Moore. In the eyes of most elites, Judge Roy Moore was already guilty before these allegations came out.  Guilty of defying “the law” as decreed by five unelected judges and guilty of trying to “suppress (the) civil rights” of fellow Americans. It should come as no surprise that people like the editors of National Review and Senate Majority Leader Mitch McConnell would publicly convict Judge Roy Moore in less than 12 hours solely on one article published by a politically partisan publication.

The Washington Post's political motivations to destroy the reputation of Judge Roy Moore are evident and the tactics used against him uncannily resemble those used against President Donald Trump. A month before the presidential election of 2016, The Washington Post published accusations of sexual misconduct against candidate Donald Trump while endorsing his Democratic opponent, Hillary Clinton.

Additionally, it has now come to light that the alleged victim was convinced to go public only after The Washington Post reporter urged her to do it. Some important details of the alleged victim's story have also began to contradict each other upon further questioning of the victim's mother.

Notwithstanding the increasingly questionable reliability of the allegations, as a committed Christian Conservative and a father of five children I cannot ignore the dangers posed by actual sexual predators, and if the allegation against Judge Moore was true, it would be absolutely disqualifying.

However, as a pro-life activist I also understand that for those who hate morality, there is nothing out of bounds to destroy those that seek to uphold the moral order.

I have had my life and the life of my family directly threatened because of a pro-life campaign I was directing. I have been called an American Taliban for advocating for the right to life of preborn babies. I have been accused of wanting to kill women for being pro-life. I have been called a fascist bigot for standing up for traditional marriage. I would not wish to be tried by a jury in San Francisco, New York, or Washington D.C.

That is why it is so important to ask probing questions to get to the truth of this matter, and while I do not have inside information, there is much that we can learn from the article itself.

In the key passage of the article, The Washington Post attempts to bolster the credibility of its reporting by stating:

Neither Corfman nor any of the other women sought out The Post. While reporting a story in Alabama about supporters of Moore’s Senate campaign, a Post reporter heard that Moore allegedly had sought relationships with teenage girls. Over the ensuing three weeks, two Post reporters contacted and interviewed the four women. All were initially reluctant to speak publicly but chose to do so after multiple interviews, saying they thought it was important for people to know about their interactions with Moore. The women say they don’t know one another.

Several facts are critically important from this passage:

The Washington Post first learned of the allegations when they were in Alabama and “heard that Moore had sought relationships with teenage girls.”

The women did not know each other.

It is common in cases of serial sexual abuse for victims to come out publicly against a person who is in a position of power, but only after the first victim shows that it is possible. But in this case the four women decided to go public independently at the exact same time and with the same publication before any information about any allegation of abuse was public. It is simply impossible to believe that their simultaneous allegations happened organically after nearly 40 years of silence.

None of this automatically exculpates Judge Moore, but it certainly would damage the credibility of the accusers if on top of the fact that the reporters were on the payroll of an outspoken opponent of Judge Roy Moore, the person or organization coordinating the alleged victims with the media was also a political operative or someone with a reason to damage the reputation of Judge Moore.

It is very curious that the story exposes the alleged victims in great detail, including numerous photographs of the young women, but then fails to disclose the source that led the reporters to the information. Why?

Could it be that while the women were not political (The Washington Post article is careful to note that none of the women were related to the campaign of the Democratic candidate) the source who identified and coordinated the accusers was politically motivated? Either way, Roy Moore and the people of Alabama have a right to know who is truly behind this story.

Only Judge Moore and the accusers know if the allegations of sexual misconduct made against him are true. If they are, he should step down and repent. If they are not, he needs to fight them with every ounce of strength in his body.

Either way, the first step must be to find out who coordinated the accusers with The Washington Post reporters.

Judge Moore has acquitted himself with great distinction as a judge. Now it is his time to shine as an advocate for truth, no matter where that leads.