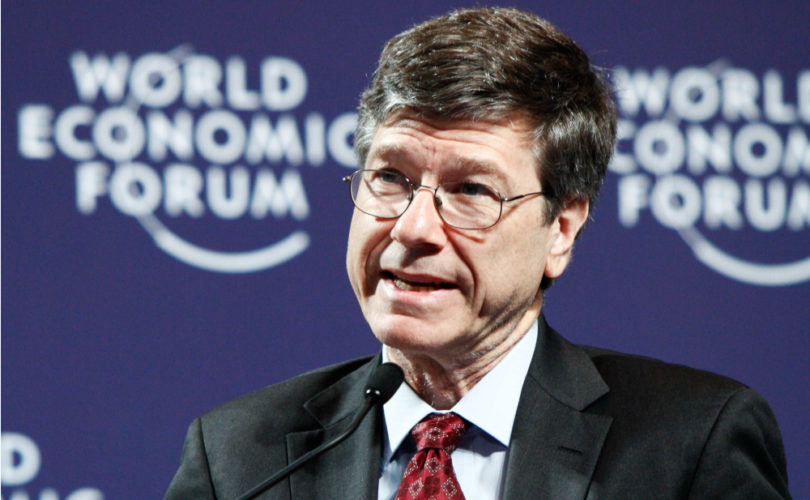 NEW YORK, May 15 (C-Fam) – Last month the Vatican drew criticism for partnering with Jeffrey Sachs, arguably the world’s foremost proponent of population control. Few know of his public stand for abortion as a way to reduce fertility.

Sachs moderated and co-hosted a Vatican conference on climate change last month. While a change of Catholic teaching is not likely in the works, Sachs’ welcome in Rome drew sharp criticism from those familiar with his life’s work.

He made a plea for legalizing abortion as a cost-effective way to eliminate “unwanted children” when contraception fails in his 2008 book “Commonwealth: Economics for a Crowded Planet.”

He describes abortion as a “lower-risk and lower-cost option” than bringing a new human life to the world.

He also glowingly writes that the “legalization of abortion reduces a country’s total fertility rate significantly, by as much as half a child on average”, and criticizes Ronald Regan and George H.W. Bush for denying groups that provide and promote abortion any U.S. funding through the Mexico City Policy.

Sachs is listed as an author of the background note to a declaration adopted by scientists and religious leaders at the Vatican conference, which validated the theory that human activity is changing the Earth’s climate. Unlike the declaration, the background note with a Vatican emblem at the head speaks of the world’s population as a problem.

Sachs is a development guru of sorts who gained fame advising countries on transitioning to a market economy following communism. He was the lead architect of the Millennium Development Goals, and has been the UN Secretary General’s right hand man on development for the better part of the last fifteen years.

During the Millennium Development Goals’ implementation he pleaded incessantly for countries to include “sexual and reproductive health” and “reproductive rights” in the scheme, after they were initially left out, and was part of the machinations that eventually led to their inclusion over and against objections from the Holy See and the United States.

Sachs is the heir-apparent of the discredited population alarmists of the twentieth century who warned against the “population bomb” and developed the concept of the Earth’s limited “caring capacity.”

In his 2008 book he praises the widespread adoption of family planning programs in the 60s and 70s, even though they are widely recognized as having been coercive and dehumanizing. But according to Sachs “high fertility rates are deleterious to economic development.”

He frequently speaks of humanity transgressing “planetary boundaries” and the threat of an overly-crowded planet. He has been a leader in developing and promoting the theory of the “demographic dividend,” which says countries must invest in family planning and reduce fertility before they can experience development. The theory has been criticized for failing to result in any dividends in entire regions, where fertility rates have dropped precipitously in the past two decades, and underemphasizing the corresponding risks of rapidly aging populations.

This isn’t the first time that Jeffrey Sachs was honored at the Vatican. He delivered a keynote lecture at the Pontifical Academy of Sciences in 2013. In the bio included on his personal webpage he boasts having advised John Paul II on the encyclical “Centesimus Annus.”

Sachs’ link to the Vatican appears to be Monsignor Marcelo Sánchez Sorondo, Chancellor of the Pontifical Academy of Sciences, who hosted the Vatican Conference last week together with Sachs’ Sustainable Development Solutions Network. Sánchez Sorondo sits on the group’s Leadership Council.

The Vatican prelate did not reply to email requests for comment both last week and this week on the reactions from Catholic intellectuals and pro-life media criticizing how the two most powerful proponents of abortion and population control were given a platform at the Vatican.