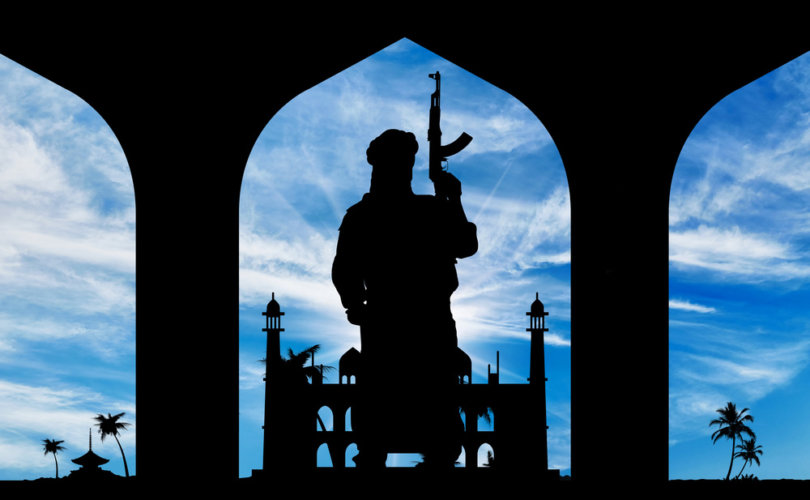 September 12, 2018 (Turning Point Project) – Imagine that you find an envelope outside your door. In it are six bullets and a note: “With these six bullets we will kill you and your family.”  Imagine that a few days later a box is left at your door with a note saying, “In this box we will bring your children's heads.”

For those who live in the West, it's difficult to imagine such things, yet this is an everyday reality for Christians living in the Middle East and North Africa.  Faithkeepers is a new documentary by the Clarion Project about Christians in Muslim lands who refuse to denounce Christ despite daily persecution, including rape, torture, and murder.

The question is, who is keeping faith with the faith keepers? According to Aid to the Church in Need, some 215 million Christians worldwide face severe persecution, mostly at the hands of Muslims.  Yet a recent poll of U.S. Catholics reveals that they are more concerned about climate change than the global persecution of Christians.

Given a list of five global concerns, Catholics put persecution of Christians at the bottom of the list.  The plight of LGBT families wasn't on the list, but – seeing how thoroughly Catholics have been indoctrinated on the subject – one can imagine that if it were, it would be ranked as a more serious concern than Christian persecution.

In fact, acceptance and inclusion of LGBT families was a main concern of the just concluded World Meeting of Families (WMOF) in Dublin.  A featured speaker was Fr. James Martin, S.J. – one of the Church's loudest voices on behalf of the LGBT community. Several other talks also focused on sensitivity to the special needs of LGBT individuals and their families.  By contrast, as far as I can determine, only one talk out of approximately 100 presentations concerned the plight of persecuted families in the Middle East.   Moreover, the two-page summary of the talk that I read contains neither the words “Christians” nor “Muslims.”  Rather, the suffering families were portrayed merely as victims of generic “conflict.”

The WMOF's strange emphasis on the needs of LGBT families, and its relative silence on the plight of persecuted Christian families, signifies a grotesque loss of perspective on the part of the Catholic leadership.  What ought to be secondary or even tertiary concerns have been elevated over primary concerns.

On the one hand, Church leaders pay close attention to the concerns of a tiny minority (gays and lesbians make up approximately 2-3 percent of the general population, while transgenders are probably less than one-half of one percent) who pursue lifestyles that contradict Church teaching. On the other hand, the same leaders pay scant attention to the millions of Christians who are keeping the faith in the face of unrelenting persecution.

But the film doesn't dwell on statistics.  It wisely lets the victims tell the story:  A young married women is abducted, bound, thrown into a room with two other female prisoners, and together with them is tortured and raped. All of them refuse to convert to Islam. A boy witnesses his father's beheading, and becomes mute as a result, but experiences a miraculous recovery when his mother takes the family to a monastery in the hills.  A family makes a dangerous escape in a car, with corpses on the road, bullets flying around them, children crying, and gas tank nearing empty.

Meanwhile, back at WMOF, all the other concerns were overshadowed by the specter of a new global wave of clerical abuse and cover-ups. Unlike some of the other conference concerns, the scandals are not a secondary matter. They go to the heart of the sickness in the Church – not a lack of sensitivity, but a lack of fidelity to Christ and his commandments.  By covering up the abuse, bishops and heads of seminaries have substituted worldly standards of non-judgmental tolerance for Christ's “hard” teachings about sexual morality.

The abuse scandals are doubly scandalous because they come at a time when the Church is entering a new era of persecution.  Although the scandals certainly demand our attention, they also serve to draw attention away from the plight of persecuted Christians – a group that was not receiving sufficient attention to begin with.  Unfortunately, the story of immoral clerics and cowardly bishop is – from a media perspective – a far more interesting story than the persecution of faithful Christians in far-ways places.

There is another factor to consider.  The abuse scandals have not only taken attention away from the persecution, they have also taken away much of the monetary support that could have been provided by the Church to the persecuted. Some of the hundreds of millions of dollars that dioceses have paid in hush-money settlements over the years might well have gone to help those Christians in the Middle East and Africa who live in situations of constant danger.

Future Church historians will wonder at this gross inversion of priorities. They will wonder how the Church became so absorbed with sensitivity to sexual sub-cultures that it lost sight of a grave external threat to its very existence.  They will also wonder why Church leaders in the early 21st century seemed more concerned with showing solidarity with Islam  (witness the USCCB's anti-Islamophobia campaign) than in showing solidarity with persecuted Christians.

This lost perspective won't be easily restored, but a film such as Faithkeepers is a step in the right direction.  In an age when some Christians want the Church to sacrifice the faith for the sake of their own sexual preferences, Faithkeepers acquaints us with courageous Christians who are willing to sacrifice their lives for the sake of their faith. Attendees at the WMOF would have benefited if Fr. Martin's tendentious speech had been replaced with a showing of this illuminating film.

This article originally appeared in the August 29, 2018 edition of The Catholic Thing. It is published here with permission from the Turning Point Project.