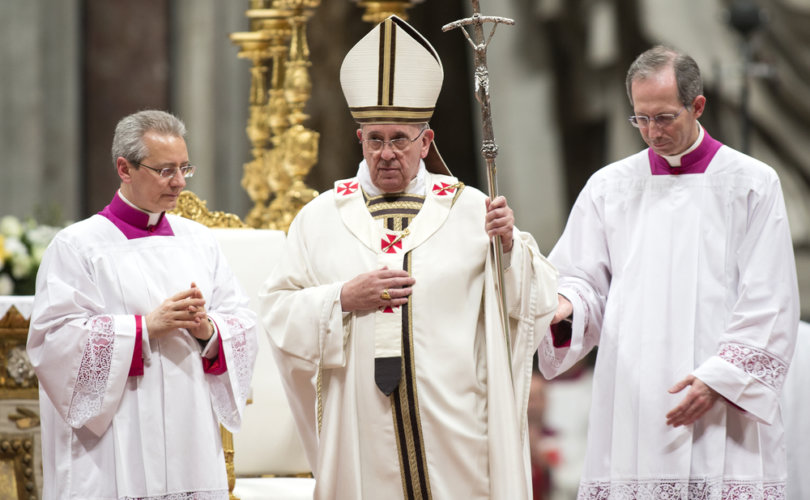 Likewise, if you approve of murder you cannot, if you wish to retain your reputation for logical consistency, condemn assault and battery.

Again, if you are a Catholic who approves of adultery, you cannot very well condemn contraception and fornication.

But in the now famous (perhaps I should say notorious?) Chapter VIII of Amoris Laetitia, Pope Francis seems to approve of what has hitherto been regarded by the Catholic Church as adultery. He asserts – or at least he certainly seems to assert – that in certain circumstances a divorced-and-remarried Catholic should be allowed to consider his/her second marriage a true marriage. In other words, this divorced and remarried Catholic should be free to have sinless sexual relations with his/her spouse and should be free to receive Communion.

This appears to contradict the plain words of Jesus himself, who said (unless the Gospels misreport him) that a married person who marries again while his/her first spouse is living commits adultery. Pope Francis, then, appears to be condoning in certain circumstances what Jesus himself calls adultery. And if the pope does this, how can he then not also condone (in certain circumstances) contraception and fornication?

In short, doesn’t the pope’s blessing of adultery in certain circumstances imply the collapse of almost the entire structure of Catholic sexual morality? Apart from rape and child molestation, what sexual taboos would remain? And won’t the priest or ex-priest who molested boys be able to argue that that kind of thing is allowable “in certain circumstances”?

As for homosexual sodomy, the question of whether or not to condemn it would depend on whether it is more or less of a sin than adultery. If less, then the pope’s permission of adultery in certain circumstances would also apply to homosexual behavior in certain circumstances. If more, then I suppose Catholics could still condemn homosexual conduct. But in reality, how could they do this if the whole structure of Catholic sexual morality had collapsed? If adultery and fornication deserve approval, who except a genuine homophobe would have the heart to disapprove of homosexual sodomy?

A defender of Chapter VIII of Amoris Laetitia might respond to what I have just said by pointing out that the pope is urging us to tolerate second marriages only in very rare and very narrow circumstances. He does not intend to open the door to the current secular ideal of nearly limitless sexual freedom. True enough. Likewise, the people who didn’t repair the leak in the dike didn’t intend to have the dike collapse and the land behind the dike flooded by seawater. After all, it was such a big dike and such a small leak. What harm could be done?

Human beings, and I include Catholics in that category, are rational animals. This doesn’t mean we are infallible; it doesn’t even mean that we are very smart. But we tend to be consistent, at least in the long run. Once we adopt the principle, for instance, that “all men are created equal,” it will sooner or later dawn on us that we’ll have to get rid of slavery. Likewise, once Catholics agree with the pope that Jesus was in error when he expressed his absolutist views about the indissolubility of marriage, the whole structure of Catholic sexual morality will sooner or later collapse.

And not just sexual morality. The whole structure of Catholicism will collapse. For if Jesus, who (we should remember) was no minor authority figure in the history of the Church, was wrong about marriage, who knows how many other things he was wrong about? And if Jesus was wrong, it is likely St. Paul and other New Testament writers were wrong. And if Jesus and Paul were wrong, who can be confident in the teachings of the Fathers and Doctors of the Church? One small leak in the dike.

Now I don’t write all this as an ultra-conservative. Not at all. If I were able to write the Church’s law regarding marriage and sex, I’d allow everybody at least one divorce; for good people often make big mistakes, especially when young. And I’d have a tolerant attitude toward fornication and unmarried cohabitation, and I’d be only mildly censorious toward an occasional adultery. And if, nearly 2,000 years ago, Jesus had asked my advice, I would have recommended that he adopt my views, inspired as they are by the great moral wisdom of the late 20th and early 21st centuries.

For better or worse, however, the Catholic Church is not founded on the wisdom of the very enlightened and progressive present day. It is founded instead on what seems to a truly modern mind to be the provincial “wisdom” of an itinerant Palestinian preacher of the first century – a preacher we Catholics believe to be the all-perfect God incarnate. At least we say we believe this. If we really believe it, and if a disagreement opens up between Jesus and the pope on the question of the indissolubility of marriage, then, much though it grieves us to separate ourselves from such a good man as Pope Francis, we have no choice but to take the side of Jesus in this dispute.

If we don’t, the dike will collapse.