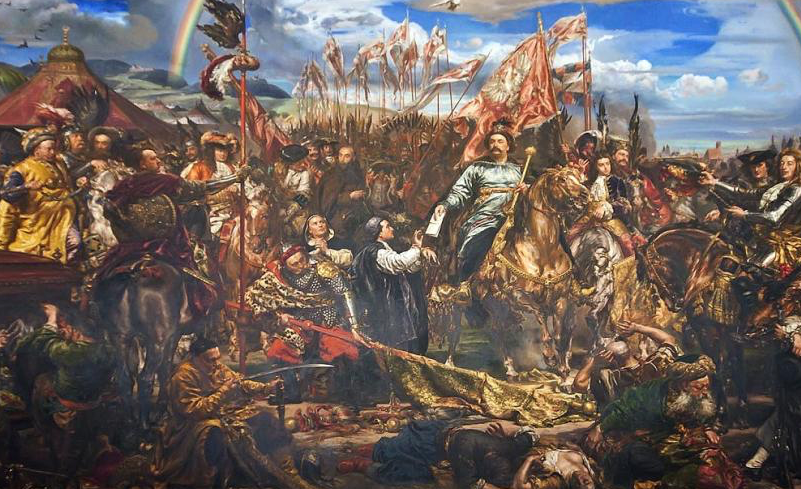 King John III Sobieski at the siege of Vienna.

July 18, 2018 (American Thinker) – Why have several Eastern European nations been so adamant against taking in Muslim migrants? Most recently, when Polish lawmaker Dominik Tarczyński was asked earlier this month how many “refugees” Poland has taken in, he flatly responded: “Zero.”

When the British interviewer, whose nation has taken in millions of Muslim migrants, scoffed, “And you're proud of that?,” he said: “We will not receive even one Muslim, because this is what we promised [to voters] … this is why our government was elected; this is why Poland is so safe, this is why we have not had even one terror attack.”

Considering that “[t]housands of Catholics formed a human chain along the borders of Poland” late last year “to pray for peace and 'against the Islamisation of Europe,'” it is clear that the Polish government is acting on behalf of the people.

What accounts for this staunchly anti-Islamic response? The answer rests in history. Unlike most Western European nations, which, thanks to their geographical proximity, have for centuries been out of the reach of – and thus have forgotten all about – Islam, Eastern Europeans are intimately acquainted with it.

Indeed, an event that occurred this week in history sheds much light on the current situation. On July 14, 1683, the largest Islamic army ever to invade European territory – which is saying much, considering the thousands of invasions preceding it since the eighth century – came and surrounded Vienna, the heart of the Holy Roman Empire and de facto nemesis of Islam.

Some 200,000 Muslim combatants, under the leadership of the Ottomans – the one state in nearly fourteen centuries of Islamic history most dedicated to and founded on the principles of jihad – invaded under the same rationale that so-called “radical” groups, such as the Islamic State, cite to justify their jihad on “infidels.” Or, to quote the leader of the Muslim expedition, Grand Vizier Kara Mustafa, because Vienna was perceived as the head of the infidel snake, it needed to be laid low so that “all the Christians would obey the Ottomans.”

This was no idle boast; sources describe Mustafa as “fanatically anti-Christian.” After capturing a Polish town in 1674, he ordered all the Christian prisoners to be skinned alive and their stuffed hides sent as trophies to Ottoman Sultan Muhammad IV.

Such supremacist hate was standard and on display during the elaborate pre-jihad ceremony presaging the siege of Vienna. Then, the sultan, “desiring him [Mustafa] to fight generously for the Mahometan faith,” to quote a contemporary European, placed “the standard of the Prophet … into his hands for the extirpation of infidels, and the increase of Muslemen.”

Once the massive Muslim army reached and surrounded the walls of Vienna on July 14, Mustafa followed protocol. In 628, his prophet Muhammad had sent an ultimatum to Emperor Heraclius: aslam taslam, “submit [to Islam] and have peace.” Heraclius rejected the summons; jihad was declared against Christendom (as enshrined in Koran 9:29); and in a few decades, two thirds of the then-Christian world – including Spain, all of North Africa, Egypt, and Greater Syria – were conquered.

Now, over a thousand years later, the same ultimatum of submission to Islam or death had reached the heart of Europe. Although the Viennese commander did not bother to respond to the summons, graffiti inside the city – including “Muhammad, you dog, go home!” – seems to capture its mood.

So it would be war. On the next day, Mustafa unleashed all Hell against the city's walls, and for two months, the holed up and vastly outnumbered Viennese suffered plague, dysentery, starvation, and many casualties – including women and children – in the name of jihad.

Then, on September 12, when the city had reached its final extremity, and the Muslims were about to burst through, Vienna's prayers were answered. As an anonymous Englishman explained:

After a siege of sixty days, accompanied with a thousand difficulties, sicknesses, want of provisions, and great effusion of blood, after a million of cannon and musquet shot, bombs, granadoes, and all sorts of fireworks, which has changed the face of the fairest and most flourishing city in the world, disfigured and ruined [it] … heaven favorably heard the prayers and tears of a cast down and mournful people.

The formidable king of Poland, John Sobieski, had finally come at the head of 65,000 heavily armored Poles, Austrians, and Germans – all hot to avenge the beleaguered city. Arguing that “it is not a city alone that we have to save, but the whole of Christianity, of which the city of Vienna is the bulwark,” Sobieski led a thunderous cavalry charge – history's largest – against and totally routed the Muslim besiegers. (See Sword and Scimitar for a detailed recounting of this pivotal battle.)

Although a spectacular victory, the aftermath was gory: before fleeing, the Muslims ritually slaughtered some 30,000 Christian captives collected during their march to Vienna, raping the women beforehand. On entering the relieved city, the liberators encountered piles of corpses, sewage, and rubble everywhere.

It is this history of Islamic aggression – beginning in the fourteenth century, when Muslims first established a foothold in southeastern Europe (Thrace), and into the twentieth century when the Ottoman sultanate finally collapsed – that informs Eastern views on Islam.

As one Pole, echoing the words of Sobieski, said during last year's human chain demonstration, “a religious war between Christianity and Islam is once again underway in Europe, just like in the past.”

Whereas Western nations cite lack of integration, economic disparities, and grievances to explain away the exponential growth of terrorism, violence, and rapes that come with living alongside large Muslim populations, Eastern nations see only a continuity of hostility.

Raymond Ibrahim, author of The Al Qaeda Reader, Crucified Again, and most recently Sword and Scimitar: Fourteen Centuries of War between Islam and the West, is a Judith Rosen Friedman fellow at the Middle East Forum and a senior fellow at the Gatestone Institute.

Note: A portion of this article was excerpted from the author's new book, Sword and Scimitar: Fourteen Centuries of War between Islam and the West (foreword by Victor Davis Hanson). All quotes are sourced there.