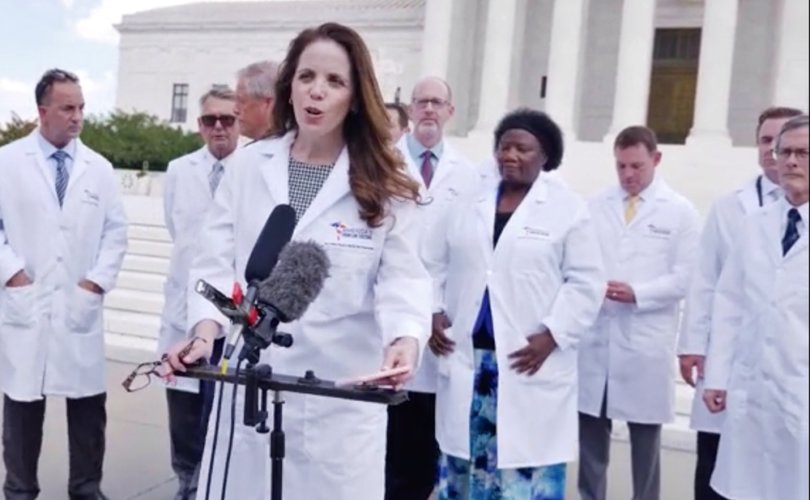 July 31, 2020 (LifeSiteNews) – Joseph Goebbels, head of the Third Reich’s Ministry of Propaganda once said, “Let me control the media and I will turn any nation into a herd of pigs.” A handful of large corporations in the United States today control the bulk of information available to the public on the internet. Increasingly those who express unpopular opinions, diverging from the liberal mainstream’s narrative, are censored and banned.

Google, Twitter, and Facebook recently flexed their cumulative muscle by removing a July 27th press conference video by a group of board-certified physicians discussing what’s become a treatment for the coronavirus using hydroxychloroquine (HCQ) that’s become a political football since President Trump spoke favorably about it several months ago. During the eight hours the video was online at Breitbart’s website, about 16 million people viewed and shared it.

What “crime speak” did the doctors commit in the video that got them banned by the tech groups? They disagreed with the demonization of a medical protocol using hydroxychloroquine, zinc, and the z-pack to treat early onset of the coronavirus.  Within hours of the video appearing on Breitbart the three giants, who don’t appear to have any medical background, acted in concert to cancel the views of these frontline doctors, despite the fact that they have treated hundreds of patients with the virus. In view of the fact that medicine is an “art” and often involves doctors trying and developing unproven treatments, one would expect a conversation rather than a draconian crackdown. Many once-controversial treatments are now standard. Doctors of the past ridiculed by their peers, like Louis Pasteur who developed the cure for anthrax and rabies, are now revered as medical pioneers.

The liberal censorship lockstep became even more obvious as the mainstream media picked up the story and began attacking the doctors. CNN, in a clearly biased article, stated that:

The video, published by the right-wing media outlet Breitbart News, featured a group of people wearing white lab coats [my emphasis] calling themselves “America's Frontline Doctors” staging a press conference in front of the US Supreme Court in Washington, DC.

CNN implied that these men and women were imposters at worst, snake oil salesmen at best. The liberal news outlet and their allies in the mainstream media decried the facts presented as “misleading, false, and misinformation.” They dismissed out of hand these doctors who work directly with virus patients or who have expertise in particular areas relating to COVID-19 policies. The views of reputable medical professionals deserve to be heard. The doctors stated at the outset that they want to offer good news and hope to the American people about the virus.

Pediatrician Robert Hamilton, author of 7 Secrets of the Newborn, is known as the “baby whisperer” for his “how to” method for calming crying infants. He received his medical degree and did his residency at UCLA medical school and has practiced pediatrics for over 35 years. Past president of the Los Angeles Pediatric Society, he founded Lighthouse Medical Missions, a volunteer group that organizes short-term medical missions to Africa, Asia, Central and South America – participating himself in more than two dozen. Because of his expertise and reputation, he has appeared as a guest on several TV shows including Dr. Oz and Good Morning America. He told reporters that children tolerate the virus well. Few are hospitalized and their mortality rate is very low. Children, he said, “are not the drivers of this pandemic.” In general, they are not passing it on. “We need to normalize the lives of our children,” he said. “We do that by getting them back in the classroom.”

Dr. Simone Gold, an emergency room physician and lawyer from Los Angeles with over thirty years experience, graduated from Chicago Medical school and received her law degree from Stanford. She spearheaded a letter from 600 doctors last May calling for an end to the shutdown. The letter described the shutdown as a “mass casualty” event saying that among the “casualties…hiding in plain sight” are “alcoholism, homelessness, suicide, heart attack, stroke, or kidney failure.” People are not getting treatments they need because of the fear engendered over the virus. Other doctors addressing the conference called for freedom for doctors and the public to have treatments available that are effective. One doctor said he never before saw an illness treated by telling victims to go home, shelter in place, and see if their illness got worse.

Following big tech’s censorship of the video, the attack on the doctors went into high gear. The Frontline Doctors website was immediately de-platformed. Most mainstream media reporting on the event vilified the doctors and ignored or debunked the data and studies they offered as evidence for the efficacy of the HCQ protocol. The press conference was only part of a medical conference where scientific data was presented. How many media outlets reported on the science coming from many countries showing that HCQ saves lives?

In response to the censorship, the group held a second press conference Tuesday, July 28th, calling for an end to the “paralyzing fear.” They promised they aren’t going away. Hydroxychloroquine is safe at low doses, they said, and was used successfully against SARS in 2005 which acts in a way similar to the coronavirus. Neurologist Teryn Clark from Newport Beach, CA urged people to see for themselves the safety of hydroxychloroquine by going to the CDC website’s information page for malaria and hydroxychloroquine. “The mechanism of action for this disease (COVID-19) is very similar.” Drugs, she said, are often used for off-label purposes, and there is a petition currently at the FDA to put the drug on label for the virus.

Dr. Richard Urso said he’s been trying to get the word out about the effectiveness of HCQ since January. “We can’t let our patients die without treatment and that’s the major thing that’s happened. We’ve been told to hide in our houses, wear a mask, and wait for a vaccine. That’s not a strategy. We have a strategy.” He went on to point out that studies done in other countries show the efficacy of using the drug and that one of the world’s leading virologists, French microbiologist Didier Raoult, has used hydroxychloroquine with astounding results since the beginning of the pandemic. “Hydroxychloroquine works; withholding it from patients is shameful!”

In many parts of the world, HCQ is available over the counter. It’s one of the safest drugs available and has been used for over 60 years. As Dr. Clark said, there is no shortage of the drug in the United States. In fact, there’s a stockpile of 63 million doses.

One of the most compelling messages came from child psychiatrist Mark McDonald of Los Angeles who described the increasing mental health crisis among his young patients. He’s seeing fear across the board with bed-wetting, self-mutilation, depression, anxiety even suicide. “We need a strategy to end the fear,” he said. “At this point, it’s not a medical crisis; it’s an emotional crisis. But people are so afraid, [they are] grasping at straws to find anything, anything at all that will give them a sense of peace and comfort.” He went on to offer hope saying, “We have that now…hydroxychloroquine If we can release this and get this to the American people the fear will end, our children will be safer…parents will be back to work and our country will get back on its feet. We need to do this now! Take charge of yourselves…. Don’t leave it up to the leadership, the politicians, the media, the special interest groups….Talk to your doctors, to your senators…speak out, take back your freedom, stop living in fear.”

The group advised Americans to contact their doctors and political leaders and demand that HCQ be made available for virus treatment and prophylactic prevention. It’s time to make the HCQ protocol a decision between a patient and the doctor and get big tech out of it! As for the censorship and one-sided narratives, Joseph Goebbels knew the key ingredient to controlling the masses was to convince them they were in control. “Propaganda works best,” he said, “when those who are being manipulated are confident they are acting on their own free will.”