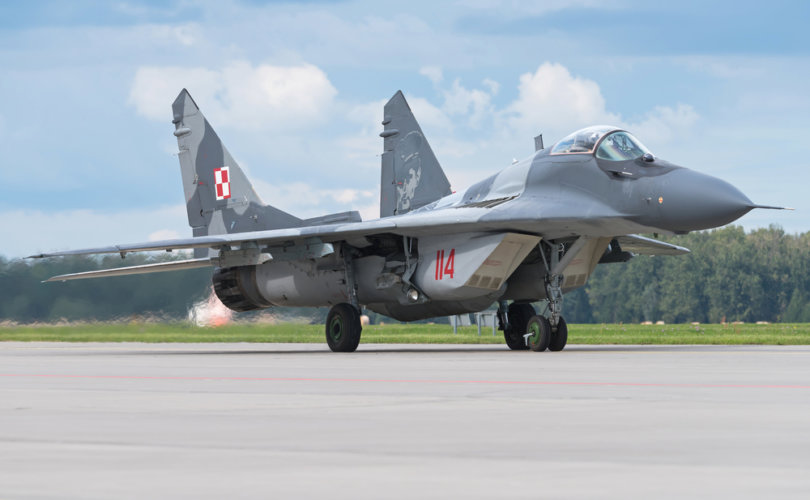 (LifeSiteNews) – Poland is on the verge of sending military aircraft to Ukraine, claimed a number of mainstream media outlets along with the U.S. Secretary of State, despite Polish authorities explicitly and repeatedly ruling out the move. Such a show of military assistance to Ukraine would undoubtedly lead to Russia declare war on additional nations, prompting the question as to why anyone would want to push the false narrative about Polish military assistance.

In recent days, a number of prominent media outlets – The Hill, The Telegraph, Politico – reported that Poland was considering transferring military aircraft to Ukraine in a move to counter the Russian advance in the ongoing conflict.

Responding to requests from Ukrainian President Volodyrmr Zelenskyy for NATO aid against Russia military forces, four “U.S. officials” told Politico that Poland was considering transferring its 28 Russian made MiG-29s to Ukraine. Ukrainian pilots would be more familiar with the Russian aircraft, having trained on the MiG’s as is common in former Soviet-bloc countries.

“We are working with the Poles on this issue and consulting with the rest of our NATO allies,” a White House spokesperson told Politico. “We are also working on the capabilities we could provide to backfill Poland if it decided to transfer planes to Ukraine.”

Under the reported plans, Poland would receive U.S. F-16s to replace the MiG-29s it would send to Ukraine. Speaking to CBS News on March 6, Secretary of State Anthony Blinken said that the U.S. was “talking” in “very active discussions” with Polish authorities about how to “backfill” the Polish air force should it send planes to Ukraine. Such a plan had the “green light,” Blinken said.

“We are looking actively now at the question of airplanes that Poland may provide to Ukraine and looking at how we might be able to backfill should Poland decide to supply those planes,” Blinken declared. “I can’t speak to a timeline, but I can just say we’re looking at it very, very actively.”

Yet, despite Blinken’s statement to CBS, and the accompanying media hype portraying the airplane transfer as almost a fait accompli, Poland has firmly denied the rumors.

“Unfortunately you are spreading misinformation with quotation from 27/02/22. Poland won’t send its fighter jets to #Ukraine as well as allow to use its airports. We significantly help in many other areas.”

‼️FAKE NEWS‼️
Unfortunately you are spreading misinformation with quotation from 27/02/22.

Poland won’t send its fighter jets to #Ukraine as well as allow to use its airports. We significantly help in many other areas.https://t.co/wjNOgh97JT

— Chancellery of the Prime Minister of Poland (@PremierRP_en) March 6, 2022

“Poland is not in a state of war with Russia, but it is not an impartial country, because it supports Ukraine as the victim of aggression,” a Polish official told the Financial Times, before adding, “It considers, however, that all military matters must be a decision of NATO as a whole.”

Polish Prime Minister Andrzej Duda already ruled out the possibility of sending Polish planes to Ukraine on March 1. Such a move would be “military interference,” he said. “We are not sending our planes because that would mean military interference in the conflict.”

Underlying Duda’s aversion to providing military aircraft to Ukraine is the stark warning from Vladimir Putin about escalation of the conflict to new, international levels. Putin has warned that any involvement by third-party nations, particularly the enforcement of a no-fly zone in Ukrainian airspace, would be seen as a “participation in the armed conflict,” resulting in Russian military response against those countries.

NATO ruled out enforcing the no-fly zone over Ukraine on March 4, with NATO Secretary Jens Stoltenberg explaining the ruling, saying a no-fly zone “would end up with something that could end in a full-fledged war in Europe involving many more countries and causing much more human suffering.”

Moscow has even warned neighboring countries against allowing Ukrainian pilots to use their airfields as operating bases, threatening military action for this also.

“We know, based on evidence, of Ukrainian fighter planes that have flown over Romania and other neighboring countries,” Russian spokesman Igor Konashenkov said Sunday.

“We call attention to the fact that the use of air base networks of these countries as bases for the Ukrainian air force, followed by their deployment against the Russian armed forces, could be seen as the involvement of these states in the armed conflict,” Konashenkov said.

In a separate tweet, relating to the number of Ukrainian refugees Poland has taken in over the past weeks, the Polish Chancellory again addressed the issue played by the media in pushing alternate realities. The Chancellory highlighted the “extraordinary power” of the media to “easily spread misinformation.”

The media have an extraordinary power. Beyond sharing news, they can quickly and almost effortless create new reality, and easily spread misinformation. See how simple it is to mislead viewers and trick them. @sadek#StopFakeNews #FactsMatterhttps://t.co/rpHYyp0C3e

— Chancellery of the Prime Minister of Poland (@PremierRP_en) March 5, 2022

Poland is thus clearly aware of the disruptive and manipulative role the media plays, especially in times of war and crisis. The question remains then, as to why both the media and Secretary Blinken appear to be promoting a plan of “military interference” that would send Poland and the other NATO countries into a war with Russia, particularly when Poland have ruled out such a move.

Why would Blinken and much of the mainstream media of the West so publicly propose something that could swiftly lead to large-scale conflict with Russia while at the same time NATO has ruled against actions which could lead to that very same large-scale conflict? What is behind the “back-door” tactic, and how honest are the Western military powers actually being with their respective nations?