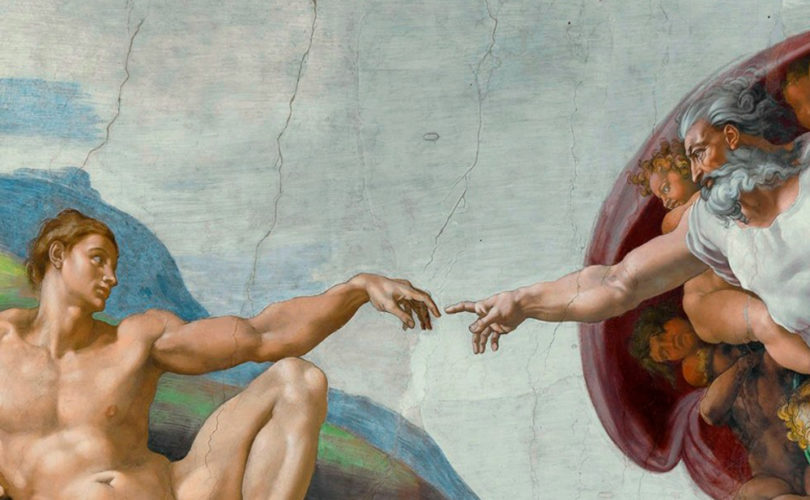 December 21, 2015 (LifeSiteNews) – To defend life and marriage in their integrity we have to uphold and believe in the immediate creation of man and all that is substantially taught to us by God in the first three chapters of the book of Genesis. That man was created by a special intervention of God in His image and likeness. We have to hold in accordance with the teachings of the Pontifical Biblical Commission in 1909 that the first three chapters of Genesis are primarily historical and are foundational of Christian doctrine; they are not a compilation of mythical narratives or only “true” in a vague “religious” sense. The Genesis account of the truth of creation is also expressed with growing vigor in the message of the prophets, the prayer of the psalms, the liturgy, and in the wisdom literature of the Old Testament (see the Catechism of the Catholic Church, 288). The Church in her Magisterium teaches that, “The truth about creation is so important for all of human life that God in his tenderness wanted to reveal to his People everything that is salutary to know on the subject” (CCC 287). So this important statement reinforces our belief in the historical nature of the Genesis account. With the beginning of creation God established a historical sequence of events. The first three chapters of Genesis have to be read “in the light of Christ, within the unity of Sacred Scripture and in the living Tradition of the Church, these texts remain the principal source for catechesis on the mysteries of the ‘beginning’: creation, fall, and promise of salvation” (CCC 289). Creation is the first gift of God, His primary miracle. First we have the creation of spiritual creatures, then the material world designed to serve mankind as our habitat, and finally He crowned His work with the creation of man and woman.

All forms of evolutionary theory require a complete rejection of God’s revelation about the creation of Our First Parents.  Genesis speaks of God forming Adam’s body from the slime of the earth and breathing into it the breath of life.  It also speaks of God forming Eve’s body from Adam’s side and presenting her to him as his help-mate.  The Fathers and Doctors of the Church held that God created the body of Adam together with his soul.  Summarizing the patristic doctrine, St. John of Damascus wrote: “From the earth He formed his body and by His own inbreathing gave him a rational and understanding soul, which last we say is the divine image . . .” (St. John Damascene, On the Orthodox Faith 2:12).  The Magisterium of the Church is very clear in affirming the common origin of all the human race, interpreting in a literal way the teaching of Acts, “from one ancestor [God] made all nations to inhabit the whole earth” (Acts. 17:26, C.C.C. 360-361). As a consequence this teaching totally rejects the theory of polygenism that proposes that man has many different ancestors. As St. John Chrysostom eloquently shows, man is at the center of creation at how for his redemption he did not spare His own Son (Cf. St. John Chrysostom, In Gen. sermo 2, 1: PG 54, 587D-588A).

The acceptance of the theory of evolution leads us to consider that the newly conceived human passes through different stages of development that parallel the ones of which are described by this theory as the evolution of living beings and only at the end of this process the human embryo becomes human. This position leads to the acceptance of abortion in the first months of pregnancy. It is totally unacceptable because Jesus Christ who was the model that Christ had in mind when he created Adam was fully human at the moment of His incarnation. St. Maximus the Confessor held (in II Ambigua 42) that Jesus was a man like us in all things but sin and that therefore His assumption of our humanity from the moment of the Annunciation signified that we, too, become fully human from the moment of our conception.

If the humanity of Christ was the model of our first parents that should lead us to set aside the opinion that the body of our first parents was the body of a primate that “evolved” in such a way that it could “receive” a human soul. It is far more reasonable to believe in accordance with the teaching of Genesis that God created a special body to receive the human soul. Man is radically different from animals. The fact that he shares some elements with them only serves to mark the abysmal differences. These differences and the superiority of man are underlined in Genesis when he is given dominion over all the creatures that populate the Earth (Gn. 1:26-27).

The First Vatican Council teaches that God creates to manifest His perfections through the benefits He bestows on His creatures. It is evident that the main beneficiary of creation is man, so through his experience of the perfections of creation he would raise in adoration to God so that one day he would join in the unending heavenly liturgy.

In the Genesis text of marriage we have a basic revelation on the indissolubility of marriage.  After presenting Eve to Adam and hearing His response the Lord states “That is why a man leaves his father and mother and clings to his wife, and the two of them become one body” (Gn. 2:24). Jesus will comment later on this text in an authoritative way against those who favored divorce, stating that, “Have you not read that from the beginning the Creator 'made them male and female' and said, 'For this reason a man shall leave his father and mother and be joined to his wife,and the two shall become one flesh'? So they are no longer two, but one flesh. Therefore, what God has joined together, no human being must separate” (Mt. 19:4-6).

We have to understand well that marriage “is far from being the effect of chance or the result of the blind evolution of natural forces. It is in reality the wise and provident institution of God the Creator, whose purpose was to effect in man His loving design. As a consequence, husband and wife, through that mutual gift of themselves, which is specific and exclusive to them alone, develop that union of two persons in which they perfect one another, cooperating with God in the generation and rearing of new lives” (Humanae Vitae, 8, July 25th, 1968).

It is important to understand the central nature of the foundational doctrine of the tragic fall of our first parents: “the Church, which has the mind of Christ, knows very well that we cannot tamper with the revelation of original sin without undermining the mystery of Christ” (CCC 389). In the same way we cannot tamper with the revelation that we have received on creation.  Our First Parents were the first ones to fall into the trap of negative liberty, they ill used freedom to separate themselves from God’s loving plans. They desired to be like God, becoming the ones to determine what is good and evil, of what is just and what is unjust. This is perhaps one of the main problems of contemporary society which wishes to replace the objective law of God with a subjective approach to reality that calls good what is evil and unnatural. Modern liberty can defined as a Luciferian liberty, the liberty of the enemy of mankind that refused to serve God. But after the Fall God did not leave man with hope he promised a redeemer in Genesis 3:15 which is considered by the Fathers of the Church the first Gospel.

The effort to reach some sort of accommodation with evolution theories comes from a naturalistic approach that seeks to decrease the miraculous interventions of God in history. If the creation story is a myth compiled from different mythological stories and lacks a historical value, the main grounds to proclaim human dignity which is its creation on the image and likeness of God collapses. Also as consequence confusion over man’s origins leads to confusion over man’s destiny, undermining the whole edifice of the faith.