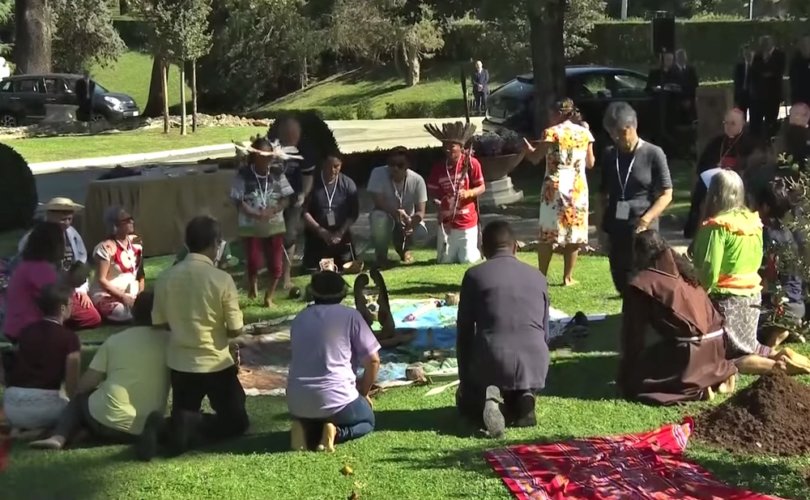 People kneel to Pachamama during pagan rite in Vatican Gardens prior to opening of Amazon Synod, Oct. 4, 2019.

November 1, 2019 (LifeSiteNews) – How can it happen that idolatry enters the temple of God without a bad conscience, but rather with a bold rejoicing?

Statuettes, which were eventually and officially identified as “Pachamama” idols, were not only the focus of a loud media hype for being rightly thrown into the Tiber, but became the symbol and the cipher of the just-ended Amazon Synod. It was an event that dealt with idolatry. The premises were already laid in the Instrumentum laboris.

It was clear from the beginning that the Amazon Synod would present a new eco-religion linked to the Earth – Mother Earth, a symbol of pronounced femininity and a source of inspiration and prophecy for our time which would give the Church its “true” face, an “Amazonian” face. It was a face that was revealed, in fact, in the carved fertility fetish.

The effort of the Vatican media to dissuade the public from the idea that it was promoting the Pachamama religion in Rome could not erase the anger and outrage of those Catholics who had the courage to raise their voices. As always, there were only a few. The fact that a liberal English magazine like The Tablet was anxious to disguise the idolatrous danger by providing a Christian hermeneutic of those statuettes says a lot.

The idolatry of these days is the result of a prolonged process that inevitably led to replacing God with things made by man. The matter of Pachamama is an accurate x-ray of the situation in the Church at this dramatic moment. Idolatry does not suddenly happen like lightning out of the blue. It is preceded by a prolonged process that begins with the loss of faith, with a silent and pragmatic atheism that grows like a larva and takes the form of an almost general apostasy. We have become atheists without realizing it while believing we are representing the interests of the Gospel in an ever-changing world. By accepting “change” as a theological place in our proclamation of the Good News (even before we could be heading to “territory” as in the Amazonian Synod), the movement, the process, has replaced the Message we wanted to deliver. In this way, creeping atheism takes shape in a diffuse apostasy.

Proof of this is the inability of many who claim to be Catholic to respond to the ongoing hammering directed against Christ and the Church. This inability actually goes deeper: it is not even the capacity to recognize the gravity of the situation and the need to intervene. How should this widespread anomaly be called if not apostasy? However, it is an atypical, fluid apostasy. It is not just an abandonment of faith, but its internal transformation into another creed, another religion. It is not just a betrayal of the Commandments of God – often nourished by inappropriate moral behavior – but above all a manipulation of theological categories and Christian doctrines to do and say something else. A nominalistic use of the faith has actually turned this de facto rejected belief into something else: the worship of idols, or at least their justification. If God is absent because we do not know if He exists, and because the faith He has revealed to us is not enough to satisfy our unfulfilled thirst for knowledge and change, then everything can represent him, every idol can express what is important to man.

In the Bible, idolatry usually occurs as a result of a spiritual adultery, of a sin of prostitution to the idols of the gentiles. Here prostitution is synonymous with the denial of spousal fidelity to the one God, it is the apostasy of Israel.

The personal story of the prophet Hosea is emblematic. Since he married a prostitute, the degeneration of the people had to be visible in the children who were generated from this union. That was salutary to call the people of God back to their faithfulness. Israel, having been led into the wilderness, would return like a faithful bride to the love of his God (see Hos 1-2). How much desert is needed today for the Lord to speak to the heart of Her beloved? But, if adultery is pragmatically justified with mercy and discernment, as it seems to happen with Amoris laetitia, does this not provoke a far more serious adultery of a spiritual nature against the faith of the Church? Is not that the prerequisite for apostasy and therefore idolatry?

Moreover, those Israelites, who, seeing Moses delaying his descent from Mount Sinai, beg Aaron to make a golden calf before which they prostrate themselves and make sacrifices are a “stubborn people” (Ex 32: 9). Many times they had grumbled against the Lord and even questioned the hand of YHWH in the miraculous exodus from Egypt. It was a people who, in discomfort, would have readily preferred the old slavery to wandering in the wilderness, and would have readily exchanged the freedom of being God's people for guaranteed food.

Idolatry is the result of a rebellion against God. It starts distrusting Him. The mistrust then leads to disengagement from God and to looking for something else. Idolatry is the direct result of the denial of the true faith.

But why are idols captivating? Why does the ‘religion’ of idols fascinate, seduce and replace the true faith? Because the idols are human work. They are the image of what man wants to be, what he really thinks and loves. To worship an idol is to worship oneself instead of God. Or rather, it is to worship the anti-god who seduces and separates from God, the devil, as it is clear from Jesus' words to the devil who tempted Him in the wilderness (see Matthew 4: 8-10).

Man cannot but worship, though he has to decide who to adore. By tolerating the presence of idols – the Pachamamas in the present context – alongside the faith, it is said that religion is ultimately what satisfies human desires.

Unfortunately, to become vain in one's thoughts darkens the already clouded mind and leads one to change the perfection of God into the likeness of the image of a corruptible man, of birds, quadrupeds and reptiles (see Rom 1: 22-23). The idols are always captivating, because we worship what we desire, without too many moral concerns. In most cases, they are the sublimation of all human instincts. Yet the real problem occurs when moral corruption spreads and infects the Church from within. Can all this be the result of God’s abandonment? The Letter to the Romans makes the point when it teaches that God gave them up to impurity for prostituting themselves to other gods, for having exchanged the truth of God for the lie by worshiping and serving the creatures instead of the Creator (see 1,24-25). A dogmatic and moral collapse is the root of this sad parable.