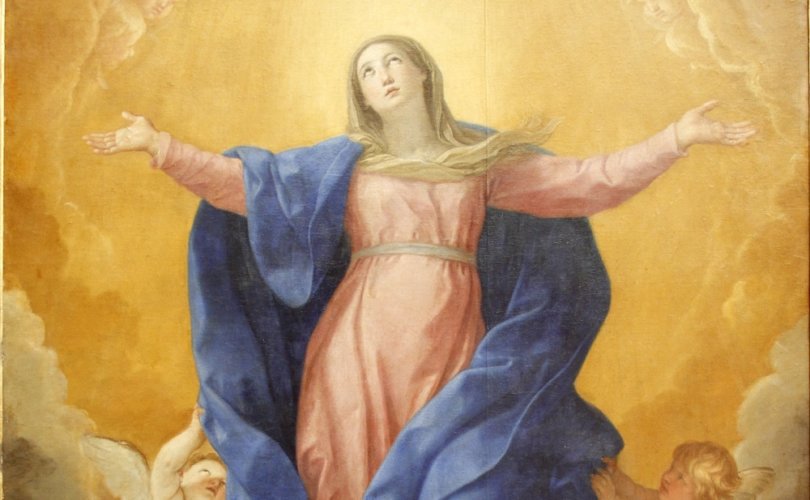 September 11, 2019 (LifeSiteNews) – “It was through the Blessed Virgin Mary that Jesus came into the world, and it is also through her that he must reign in the world,” writes St Louis Grignon de Montfort in the introduction to his masterpiece, True Devotion to Our Lady. The fact that Jesus must reign through Mary is linked by our Saint with the peculiar presence and action of Our Lady in the latter times. St Louis explains that:

the salvation of the world began through Mary and through her it must be accomplished. Mary scarcely appeared in the first coming of Jesus Christ so that men, as yet insufficiently instructed and enlightened concerning the person of her Son, might not wander from the truth by becoming too strongly attached to her. […] But in the second coming of Jesus Christ, Mary must be known and openly revealed by the Holy Spirit so that Jesus may be known, loved and served through her. The reasons which moved the Holy Spirit to hide his spouse during her life and to reveal but very little of her since the first preaching of the gospel exist no longer. (n. 49)

Among the reasons given by St Louis to explain why Our Lady has to be made known in these latter times, so that we can be endowed with a special Marian assistance, there is the following:

Mary must become as terrible as an army in battle array to the devil and his followers, especially in these latter times. For Satan, knowing that he has little time – even less now than ever – to destroy souls, intensifies his efforts and his onslaughts every day. He will not hesitate to stir up savage persecutions and set treacherous snares for Mary’s faithful servants and children whom he finds more difficult to overcome than others. (n. 50)

Our Lady must be known and loved so that we are embraced by her to live with her and in her through the latter times with no deceit or discouragement but persevering in faith. In fact, these are the times of a special battle against the enemies of God, first of all that “mystery of iniquity” which is sin. The Catechism, in describing the Church’s ultimate trial, teaches clearly that “before Christ’s second coming the Church must pass through a final trial that will shake the faith of many believers. The persecution that accompanies her pilgrimage on earth will unveil the ‘mystery of iniquity’ in the form of a religious deception offering men an apparent solution to their problems at the price of apostasy from the truth.” (675)

This deception might regard principally the way people believe without actually believing, led by religious authorities into comfortable indifference.

Are these final times already unfolding in our present time? We don’t know. It is neither our intention to speculate about it – only God knows the time and the moment. Nevertheless, this our present moment shows many of the signs that move us to think that a sort of terrible and crucial battle has been engaged.  The battle is between the serpent of Genesis and the Woman who can crush his head. Only the Woman as immaculate and ever virgin can win over the malice and the shrewdness of the serpent and his allies.

Just a few examples can help us realize the range of this spiritual battle that has to be fought. God appears to be absent, even within the Church. This might sound surprising, but the reflections of Benedict XVI on the theological roots of so numerous sexual clerical abuses in the Church, in the last 50 years, have highlighted this. Benedict XVI denounced the root of this great scandal, an unprecedented moral evil, which lies in the oblivion of God. Moral responsibility declines and dies out when our freedom is no longer orientated by the love of God, by his Word. “The death of God in a society also means the end of freedom, because what dies is the purpose that provides orientation,” he wrote.

It seems that we live in a great apostasy in which social engagement with the world has taken the place of supernatural faith. Is it irrelevant that some matters of faith concerning marriage and family life are true and Catholic in Poland, but not for example in Germany, where there are different pastoral policies in place?  At the very heart of our pastoral care there is now a preoccupation with the preservation of the Amazon rainforest, which is held as an idyllic environment, the type of any good and sound life. What is more bewildering is that the Amazon as a territory is presented as a “theological place” where we should learn about the (new) Revelation of God and live our faith in a more ecological way. No importance is given to Christ as the Saviour or to sin.

While we still use the word “salvation” in dealing with these human problems, we no longer understand its supernatural meaning – the only proper one – that has to concern us: the salvation of our soul from eternal damnation. If we lose our soul, one of the greatest works of God’s creation is lost, and there is no longer any point in saving the environment. Creation is hierarchical and at the very top there is man and man is for God. A misleading new concept of “dignity of the person” has caused us to see the person as worthy simply as a human subject and no longer as a creature of God elevated by grace. The consequence of this new Kantian approach is that we have overcome human dignity and in its place we have put the dignity of the territory. But, according to the Church Fathers, man loses his human and original dignity when he sins against God.

This time is challenging indeed. It is precisely for this reason that in these times we need to discover the precious pearl of our devotion and consecration to Our Lady. Jesus wishes to reign through Her. Jesus can reign only through Her because He came through Her. She is the door of God into this world, the same one that lets people into Christ’s Heart. She is the antidote to the eternal perdition of souls.

At Fatima, Our Lady promised: “In the end my Immaculate Heart will triumph.” We don’t know here when this “end” comes or is about to be revealed, but what we know is that if the latter times are characterised by a particular presence of Mary, they might also coincide with the promised triumph of the Immaculate Heart. Surely “the end” of Fatima marking the triumph of Mary is not the Parousia – the second coming of Our Lord, but the moment of the reign of Mary and through Her of Jesus Her Son. Those who belong to Her will be given a special grace to defeat the enemy, to uncover the maliciousness of all threats to our salvation.

Our Lady will reign. She must reign. This triumph will bring about a renaissance of our Faith in society and in the Church. Our Lady will give back to our Church Her distinctive role as disciple of the Lord and teacher of all the people, faithful to his Word, to the perennial Tradition.

We wish to hasten this triumph. Yet, it is not about being triumphalist or merely passive waiting for a solution to be given by Heaven, or, even worse, mixing up the salvific intervention of God in history with human progress in all areas of man’s life, not least the enhancement of a green lifestyle. The only possible way forward to be partakers of this triumph which is supernatural and not controlled by man, but that still requires our cooperation, is to belong to Mary, to become her property, her filial slaves of love. Consecration to Her by which we surrender ourselves to Mary as her humble servants is necessary. We need to replace our own ego with Our Lady’s in order to let Her possess our being, our intellect and will, our heart.

The advantage of being of Mary is to be victorious with Her and in Her over the devil, over sin and eternal death. We will share in her faith and She will transform us into the likeness of Jesus. In heaven Our Lady has no longer the faith since she lives in the beatific vision. However, according to St Louis Grignon, by a special concession of God, she has preserved her divine faith for her faithful servants in the Church militant (see n. 214). Her Immaculate Heart is the place where the faith of the Church and her doctrines are kept safe. Outside this Heart there is ruin and deception, a place where the devil is free to machinate.

“My dear brother,” St Louis Grignon asks, “when will that happy time come, that age of Mary, when many souls, chosen by Mary and given her by the most High God, will hide themselves completely in the depths of her soul, becoming living copies of her, loving and glorifying Jesus? That day will dawn only when the devotion I teach is understood and put into practice. Ut adveniat regnum tuum, adveniat regnum Mariae: ‘Lord, that your kingdom may come, may the reign of Mary come!’” (n. 217)

This “when” that everyone is anxious always to know seems to be destined to remain unanswered. When will this triumph come about? When can we finally see a restoration of the Faith after a very long and unbearable decay? All these questions can only be answered with another one, the capital one, the temporal but vital question raised by our Saint Louis Grignon, who asks: “When will souls breathe Mary as the body breaths air?” (ibid.) To ask this question is already to enter into these latter times and live in the hope of that Marian promise. Then all our “whens” will be answered too.