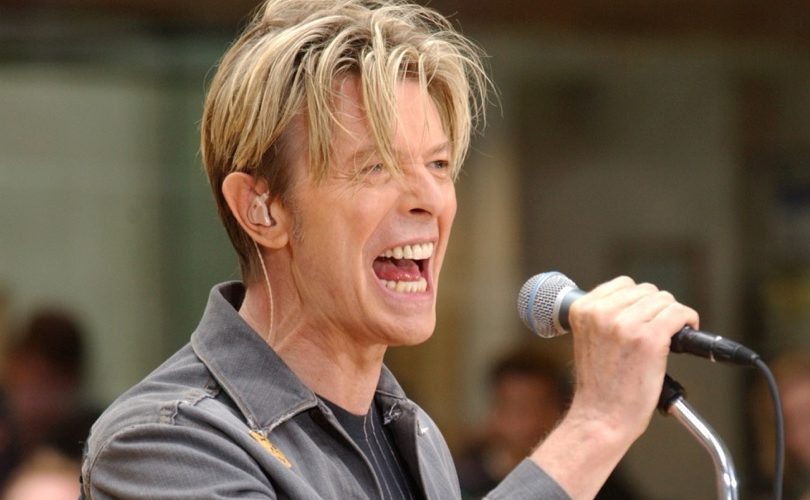 January 28, 2016 (LifeSiteNews) — Given the huge international exaltation British musician David Bowie (real last name is “Jones”) has received in the past weeks after his sudden passing from cancer at the age of 69, one might think that the world had lost one of it’s most beloved members, an inspirational visionary who changed the world for good through his music while managing to capture the hearts and minds of all who encountered him. The volume of praise for Bowie in mainstream media has little precedent.

While the world has extolled Bowie for being a rebel and a rule breaker, it was his so-called ingenuity in “reinventing” himself throughout his career — from being the bisexual space rockstar “Ziggy Stardust” to the Aryan-like superman “Thin White Duke” — that has received the highest praise. At various points in his life, Bowie has been “gay,” then ”bisexual” and then a “closet heterosexual.” He always left his fans guessing about who the real “David Bowie” was, while, at the same time, demanding that they accept him unconditionally for who he portrayed himself to be at any given moment.

And herein, I believe, lies the number one reason why the mainstream has heaped praise upon praise on Bowie: He serves as the perfect “poster boy” for the ideological “gender” movement. This movement holds that the male/female binary is simply a social construct that can be easily done away with willy-nilly with no special consequences. It is really a person’s own “self-identification,” the movement believes, that is the sole measure of that person’s “sexual orientation” and “gender identity.”

This movement has infiltrated practically every social structure, including government, schools, and mainstream media. And when the opportunity arose to make a secular saint of an illustrious rockstar who incarnated “gender ideology,” it was too good to turn down. Accolades for Bowie, the “greatest rockstar ever” who had a genius for “reinventing” himself have poured in from every corner. His varying “personas” were gushed over with admiration and enthusiasm.

Even the Vatican’s unofficial newspaper L’Osservatore Romano chimed in with a tribute, calling Bowie a singular musician who was “never banal” and “never dull.” On top of this, Cardinal Gianfranco Ravasi, the president of the Pontifical Council for Culture, paid Bowie a complement by tweeting part of his 1969 hit “Space Oddity.”

A little bit of sanity was finally restored when Fr. George Rutler, a New York pastor in Manhattan and an author, ripped L’Osservatore Romano in a Crisis Magazine article for eulogizing an artist whose “dissonant” music and problematic videos had the effect of “deranging society and inverting virtue.”

Rutler said that as a priest, he’s often had to “pick up the pieces” of people who died trying to immitate the lifestyle of “doyens” like Bowie, who he said have helped create a culture that “destroys my children.” Rutler rightly called it “ridiculous” for anyone, but especially a Catholic paper, to hype a rockstar who built his career upon libertine excesses.

Any God-fearing individual who regularly reads the Bible and takes seriously the words found within should hear loud warning bells sounding when the world practically canonizes someone who has led a life at extreme odds to God and his revelation to mankind. Particularly concerning is Bowie’s heavy involvement in the occult. This influence shows up in a lot of Bowie’s music, especially in his final album “Blackstar.”

Bowie released Blackstar two days before his January 10 death. Critics said that Bowie, always an attention seeker, managed to turn his death into a publicity stunt for selling the album, which has since gone on to top the charts. The album could arguably be called the “magnum opus” of Bowie’s lifelong fascination and involvement with the occult. In a January 7 review of the album — three days prior to Bowie’s death — Billboard called it “filled with songs about death and doom.”

“Blackstar, begins with an execution, and from there the tidings only get ­grimmer. His 25th studio album features just seven songs, but they serve up a veritable Grand Guignol of dread, death, even dismemberment,” reviewer Jody Rosen wrote. “Images of ­sadomasochism and castration flicker through the lyrics in ’Tis a Pity She's a Whore,’” she wrote.

Music Times called the music video for Blackstar “crazy” and “dark, twisted” in a Nov. 20 review. “The video is quite the journey of the bizarre as viewers are taken aback by the woman with a tail, the cult-like followers shaking erratically behind Bowie's mummified eyes and a dead astronaut, whose decorated skull is treated like a sacred object – and that's just in the first two minutes,” wrote reviewer William Hoffman.

The Christian review website “Plugged In” did not fail to pick up on Bowie proclaiming in one song that, “I’m the great I am (I'm a blackstar),” pointing out that the words amounted to Bowie “flirt[ing] deliberately and blasphemously with Jewish and Christian religious sensibilities.” In Christianity, it was God in the Old Testament who revealed himself to Moses in the burning bush exclusively as “I AM.” For Christians and Jews, the name is holy, filled with philosophical and theological significance, and is reserved for God alone. Some critics have suggested that the title “Blackstar” refers to the Black Sun, an occult symbol based upon the belief that light and dark will reverse at a culminating moment in history, at which point, all will fade into darkness. By Bowie applying the words “I AM” to himself, he is not only making a mockery of God, but, at the same time, is also suggesting that he is, in fact, god, but a god not of light, but blackness.

With Bowie’s claim in his album to be a “blackstar” who is the “great I am,” he leaves his droves of fans the job of immortalizing him and, perhaps, even elevating him to the ranks of some new kind of deity, a god-like champion for gender non-conformism in this brave new sexual world of “anything goes, however you like it.”

Christians, however, should look at the life of David Bowie and weep for a broken and impoverished man who used his gifts and talents, not to serve the Kingdom of God, but the spirit of this world. They should weep for this damaged and hurting musician who turned to drugs, sex, and dark spiritualities instead of Jesus Christ to nurse whatever deep and painful wounds he must have received during the course of his life. Christians should pray for the soul of David Bowie and leave the rest to the mercy of God.

LifeSiteNews journalist Pete Baklinski has a B.A. in Liberal Arts and a Masters in Theology with a specialization on marriage and the family (STM). He is married to Erin and together they have six children.