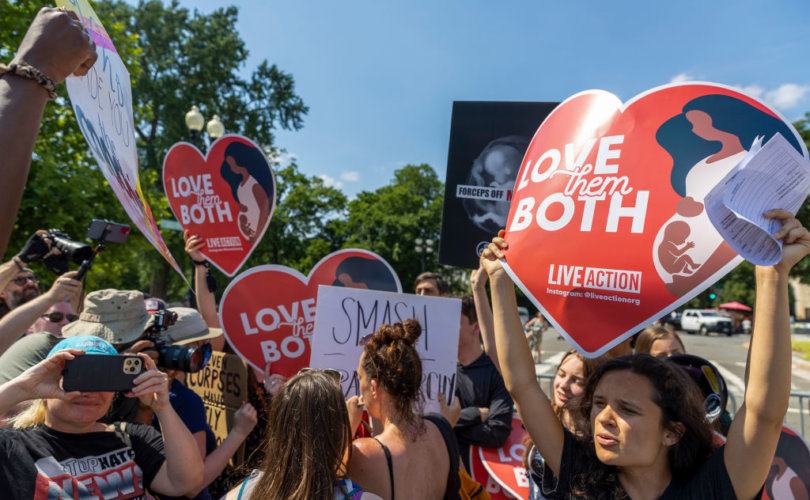 Pro-life activists gather in the wake of the decision overturning Roe v. Wade outside the U.S. Supreme Court on June 26, 2022, in Washington, D.C.Photo by Tasos Katopodis/Getty Images

(The Catholic Thing) – We American Catholics who have been fighting for the life of the unborn child had much to celebrate when the Supreme Court at last retreated from its long-standing usurpation of legislative power, and declared that the dismembering of a child in the womb is no longer a right guaranteed by the Constitution.

One might think that church bells would be ringing everywhere. We got this from the Vatican organization most concerned with the matter. It deserves to be given in full:

“The Pontifical Academy for Life joins U.S. Bishops’ statement on the decision of the Supreme Court of the United States. As Archbishop H. Gomez and Archbishop Lori declared: ‘It is a time for healing wounds and repairing social divisions; it is a time for reasoned reflection and civil dialogue, and for coming together to build a society and economy that supports marriages and families, and where every woman has the support and resources she needs to bring her child into this world in love.’

The Court’s opinion shows how the issue of abortion continues to arouse heated debate. The fact that a large country with a long democratic tradition has changed its position on this issue also challenges the whole world. It is not right that the problem is set aside without adequate overall consideration. The protection and defense of human life is not an issue that can remain confined to the exercise of individual rights but instead is a matter of broad social significance. After 50 years, it is important to reopen a non-ideological debate on the place that the protection of life has in a civil society to ask ourselves what kind of coexistence and society we want to build.

It is a question of developing political choices that promote conditions of existence in favor of life without falling into a priori ideological positions. This also means ensuring adequate sexual education, guaranteeing health care accessible to all and preparing legislative measures to protect the family and motherhood, overcoming existing inequalities. We need solid assistance to mothers, couples and the unborn child that involves the whole community, encouraging the possibility for mothers in difficulty to carry on with the pregnancy and to entrust the child to those who can guarantee the child’s growth.

Archbishop Paglia said: ‘in the face of Western society that is losing its passion for life, this act is a powerful invitation to reflect together on the serious and urgent issue of human generativity and the conditions that make it possible; by choosing life, our responsibility for the future of humanity is at stake.’”

I’ve seen more cheerful faces at a funeral. Let me note what is not here:

Meanwhile, a document that insists that we must have a “non-ideological debate on the place that the protection of life has in a civil society,” and that we must “promote conditions of existence favorable to life without falling into a priori ideological positions,” is itself a case study in ideology.

Here, it seems, the pro-life workers in the United States would be happy with being ungratefully ignored. They are instead held under suspicion for their imputed attachment to “individual rights,” whatever that is supposed to mean.

Yet the authors themselves seem to be attached to a view of the world that is individualistic and statist at once. Had they had marriage firmly in mind, and the establishment of stable and child-rich households, they might see the worst form of inequality fade – the inequality between what used to be called white-collar and blue-collar households.

But the inequality suggested here is that between what men earn and what women earn; and their concern presupposes that men and women are mere individuals in the economic arena, competing against one another, rather than meant to unite in marriage, and thus to cooperate in the more human and humane work of building up the household and the family.

Indeed, the document betrays a bias toward materialism, toward technocratic and bureaucratic solutions to moral and spiritual problems. I am stunned that after sixty years of such signal failure, sex education should still be promoted as a solution to anything at all.

It is all well and good to invoke “the whole community” in the matter of welcoming a new child into the world, but where are these communities? Where can they be, when so many people are unmarried and are living alone, and when married people themselves have few children, and when everyone is at work all the time?

Or is “the whole community” just a euphemism for the state, and its many self-serving layers of middlemen?

Yes, I welcome “non-ideological” discussion of what we are aiming for – a real society, child-rich and cheerful, and not just the “coexistence” of atomized economic actors.