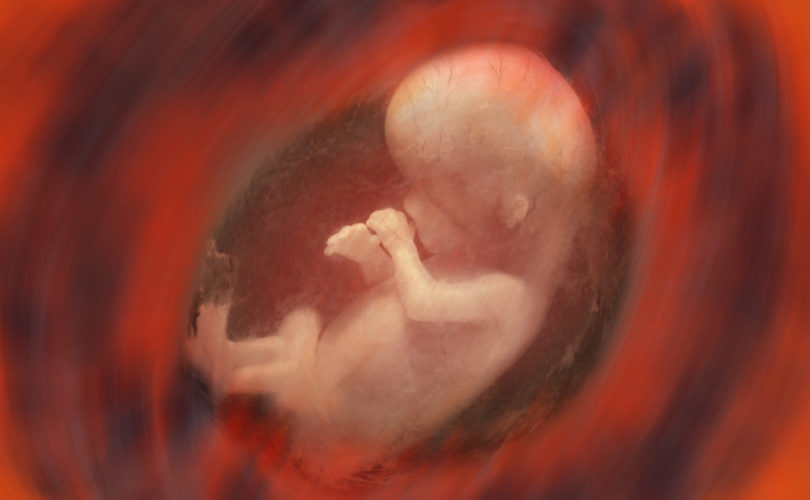 A depiction of an unborn baby at about 10 weeks gestation

(LifeSiteNews) — I have never had any interest in crickets beyond listening to their chirping in the summer. The insects represent a part of reality that does not significantly impact my daily life. Among so many other concerns, crickets are not high on the list of priorities.

However, I was intrigued by a lengthy New York Times report titled “The Mysterious Dance of the Cricket Embryos” in early August. It reported on a June meeting of 100 scientists on the Greek island of Crete who gathered to discuss cricket embryos. I never imagined anyone, let alone one hundred people, would meet anywhere to discuss such a subject.

Crickets seem to be the ideal organism to study how life works and develops. The two-spotted field cricket does not enjoy the popularity of the common fruit fly as an object of laboratory research. However, new evidence suggests it has unique qualities that make it a fascinating subject for discussion for these scientists.

Even knowing this, however, did little to pique my interest in the loud insect.

It can also be a marvel of God’s creation

I started to get interested when the article announced the topic for the international conference was the development of the cricket embryo. The article explained how the cricket embryo helps us understand all embryos since every animal’s development follows a similar growth pattern. After the original fertilized cell is formed, other cells form around the egg’s surface, “providing an early blueprint for all adult body parts.”

READ: Now that Roe is gone, which higher law will America follow?

The scientists noted that while all the cells have the same genome, they all do different things with the same information. And the scientists don’t know why this happens.

Like in a dance, the cricket embryo seems to do everything right without anyone telling the cell nuclei what to do. Seth Donoughe, a biologist from the University of Chicago, describes the process as making “the right parts at the right place at the right time.”

This description helped me see how even the cricket is a marvel of God’s Creation. The scientists spent hours watching the process of dividing and moving cell nuclei that moved in manners that were beyond mere physics and chemistry. I was even fascinated by the computer simulations in the article, which showed the entire development process from egg to birth.

All focused on crickets

My second point of interest was similar. The researchers had no doubt about the process. They identified the cricket egg, cricket embryo and final cricket as a single continuous process. I was fascinated by their laser focus on the subject of cricket embryology and its complexity.

Scientists from many disciplines collaborated in this study, all bringing their expertise. Even mathematicians got involved in making models to try to explain the complex movements of cricket cell nuclei as they rapidly divided and expanded like a “dance.” The scientists took away more than 40 terabytes of data and computer models from the encounter. Since they reached no firm consensus, the data will serve as material for further study.

My third point of interest was more moral and sociopolitical than scientific. I could not fail to make the connection between cricket and human embryology. I was struck by the utter fascination of The New York Times writer with the development of cricket embryos. However, the same journalist did not express the same interest in our human embryo development. Furthermore, I am sure that most of the paper’s staff would share that attitude since its official position — in favor of procured abortion — sees the human embryo as a parasite that can be eliminated. There is no fascination for the mysterious dance of the human embryo inside the womb.

No one wants to admit the evidence of intelligent design in those clumps of human cells that form around the human fertilized egg’s surface, “providing an early blueprint for all adult body parts.” These human cells are expendable in the liberal perspective.

Indeed, the language of the cricket journalist recognizes the cricket at all phases of its development as he describes cricket eggs, cricket embryos and later stages of cricket development. Everything is cricket. Meanwhile, the phases of human life are labeled as zygotes, clumps of cells and fetuses deprived of their humanity.

READ: Pro-lifers must not give in to the radical left after Kansas’ disastrous abortion vote

This tragic and selective fascination for crickets tells me who the liberal media are.

My final interest in the cricket consists of marveling at the liberal scientific establishment. It can focus on the minutiae of the cricket embryo yet remain indifferent to the plight of the human embryo cut short by abortion, and whose only “crime” was participating in the process of an unwanted gestation.

The scientific establishment, in general, should be on the front line in defending the unborn. Embryologists should especially protest at the violence of abortion that interrupts the process of pregnancy that is their specialty. Like those studying crickets, they know the reality of what happens inside the womb, even though it may be politically incorrect and career-crushing to shout it from the rooftops.

The enthusiasm of the cricketologists proves that embryo development is highly dynamic, scientific and complex. The scientific establishment’s shameful silence about procured abortion proves acceptance of the development of the human embryo is highly political. So many scientists follow political, not biological science.

It is also a moral problem, since abortion involves the destruction of a marvel of God’s Creation with a soul made in His image and likeness. If even a cricket causes people to marvel, how much more man, the masterpiece of Creation.

However, if we were to ask the journalists and scientists to comment on this moral aspect of human life, I suspect the reply would be the proverbial <crickets>.

John Horvat II is a scholar, researcher, educator, international speaker, and author of the book Return to Order, as well as the author of hundreds of published articles. He lives in Spring Grove, Pennsylvania where he is the vice president of the American Society for the Defense of Tradition, Family and Property