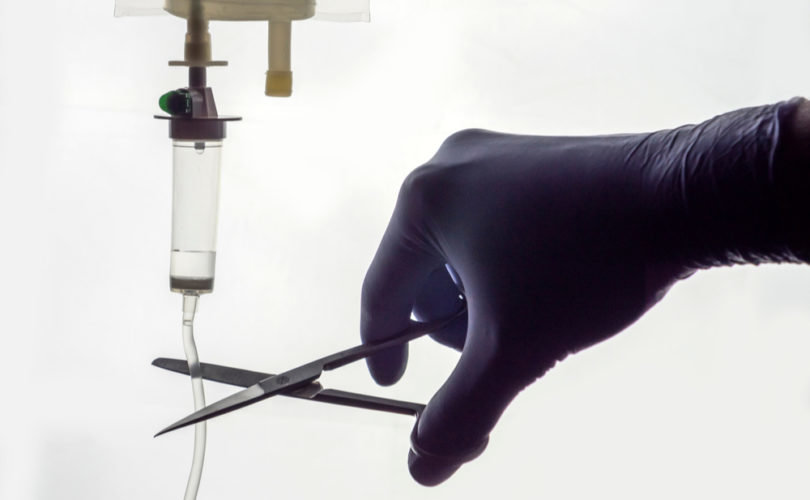 (LifeSiteNews) — Assisted suicide has received increased attention lately in legislation in various western countries. In Italy the constitutional court just upheld the country’s laws against euthanasia by voting down a referendum to legalize medically-assisted suicide that would have been sent out for a popular vote.

In support of the referendum 1.2 million signatures had been gathered. Two members of the Pontifical Academy for Life wrote publicly in favor of the referendum, while other members and the Holy See threw their weight against it.

In California, a complaint has just been filed challenging a law that requires doctors to participate in assisted suicide if a patient requests it of them. These are just a few recent examples.

In light of this public attention on the matter, we Christians in public life, whose duty it is to safeguard and promote just laws in a manner that is informed by faith, would do well to consider the special malice of this crime against life. The special or unique malice to which I refer arises from something that is often thought to mitigate the evil of the crime, namely, informed consent obtained from the patient.

Euthanasia is often cast as an act of mercy or compassion, relieving a person of unnecessary and undesired suffering. Its proponents seek to justify it further by the fact that the person’s informed consent has been obtained, as is the practice in all major medical procedures. In this way it is made to appear that the demands of both justice and charity are fulfilled, and that to act otherwise would fail of both.

The first basic moral truth that is denied in such an understanding of assisted suicide is that the act is essentially and objectively the killing of an innocent person, who has not committed any crime deserving of death. This makes it essentially an act of murder, by definition. The reason such an act is done — to relieve the person of his present suffering — does not change what is being done. The person is still being murdered. An innocent person is still being killed. This basic aspect of euthanasia is readily acknowledged by those who oppose it.

There are three conditions for a person to be guilty of a grave or serious sin, as articulated in the Catechism of the Catholic Church.

First, the act done must be grave matter: It must be gravely evil in itself. Murder is just such an act; in fact, it is often the first and most common example of a gravely sinful act.

Second, the person doing the act must know what he is doing: He must be informed. In assisted suicide the person must know that he will be killed, and if he understands also that he is innocent — i.e., that he is not guilty of a crime deserving death — then he cannot but understand that in killing himself he is killing an innocent person. In other words, the patient understands that what is being proposed to him is an act of murder.

Third, a person must freely choose the act: He must actually consent to it. It is precisely such consent that is sought and obtained from the patient in assisted suicide. Although the patient does not himself physically carry out the action, morally he is included in it through the explicit consent that he gives to the doctor who does carry it out.

In light of the three conditions for being guilty of grave sin, then — grave matter, knowledge, and consent — the informed consent of assisted suicide involves the patient himself in the guilt of murder. Further, given the inherent proximity to death, and the fact that this informed consent will be one of the person’s last acts, assisted suicide not only kills a person but places that person in imminent danger of the eternal loss of his soul.

This is not to say that the person cannot repent of his sin before he actually dies, but his opportunity for such repentance is precisely being taken away by his being killed.

St. John Vianney once told a distraught woman whose husband had killed himself by jumping off a bridge that the man had just enough time to repent before hitting the water. The saint said that through the grace of such repentance the man had been forgiven by God and his soul saved. Even so, what is in imminent peril in such a situation is the eternal salvation of such a soul.

Murder is a terrible crime and sin against life. It is all the more evil when the person murdered is involved expressly in the guilt of mortal sin just before he is killed, since this may very well damn his soul. This kind of malice is unique to euthanasia among the crimes against life. It is a special reason for the Christian in public life to oppose it.