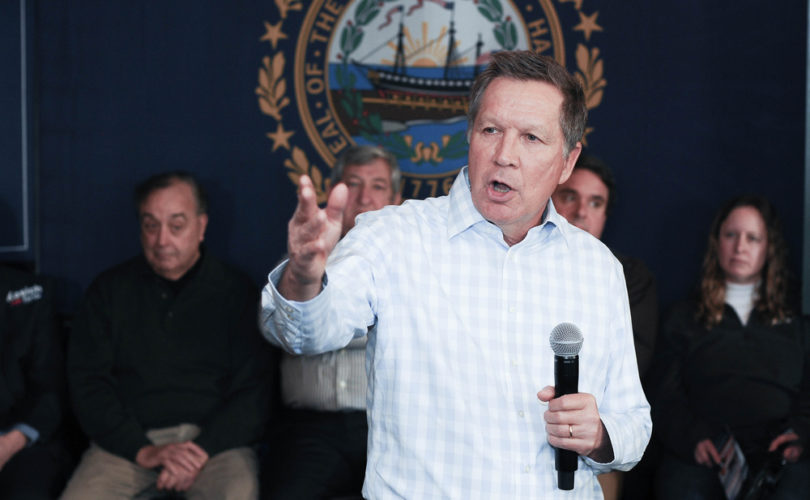 March 16, 2016 (LifeSiteNews) – It took the Ohio Governor 29 tries, but he finally won his first state in the GOP primaries.   In Tuesday’s GOP primaries, Ohio’s Governor John Kasich won his home state, and one of the most important states of the general election map.

Although it is now a mathematical impossibility for Governor Kasich to reach the necessary 1,237 votes to win the GOP primary nomination outright, the Ohio Governor has vowed to stay in the race, betting on a brokered convention along with a suspension of the convention’s rules to clinch the nomination.

As a point of explanation, Governor Kasich is not only mathematically shut out of the nomination based on delegates, but also on the fact that a candidate must win at least 8 states before he can be considered for the convention’s ballots.  This appears highly unlikely given the Governor’s 1-28 record to date.

However, there may be a different reason for Governor Kasich to remain in the race, and that can be discovered by following the trail of his donors.

A simple search of Governor Kasich’s 2016 Presidential campaign donations lists the Soros Fund Management as the sixth highest individual donor with $202,700. The seventh largest donor is the Duquesne Family Office with $150,000.  On the Super PAC side, Kasich’s New Day for America received $150,000 from Stanley Drukenmiller (who operates the Duquesne Family Office) and $200,000 from Scott Beset, who is employed by the Soros Fund Management.

In total therefore, George Soros, personally and through surrogates, has donated over $700,000 to Governor John Kasich’s campaign.

Now, if you don’t know who George Soros is or what causes he funds, please type in his name in LifeSiteNews’ search box.  You will find that we have consistently highlighted the extreme evil machinations of this man in dozens of articles throughout the years.

For example, Mr. Soros, the third largest donor to Planned Parenthood, donated $20 million in 2011 alone, specifically to build their killing centers in the “south and southeast regions” of the United States.  Soros has also been one of the largest donors to the campaign to legalize abortion in the Republic of Ireland, one of the last holdouts in Europe of traditional Catholic values.

Soros has been accused by none other than Peru’s Cardinal Cipriani of imposing his own agenda in support of homosexuality and abortion by the coercive force of his donations to radical organizations within the staunchly Catholic South American nation.  Soros has funded efforts to legalize assisted suicide in the United States, his groups have directly attacked pro-family organizations like Mass Resistance, have funded the sex-trafficking ACORN organization, the radical activist MoveOn.org organizations and the list goes on and on.

So why would this leading international advocate for a culture of death donate so much money to a GOP candidate who has been mathematically eliminated from the contest?  George Soros himself gives us part of the answer in an OpEd he recently penned in the leftist British publication, The Guardian, where he concluded his editorial with the following observation: “we must reaffirm our commitment to the principles of open society and resist the siren song of the likes of Donald Trump and Ted Cruz, however hard that may be.”

If the suspicion were raised about any other donor, it would merit raised eyebrows and references to conspiracies reporter Alex Jones, but dealing with a man such as George Soros, the financial trail and the political motive are inescapable.

For a man who made his fortune on the backs of British taxpayers by breaking the bank of England, winning by making losing bets is not in the realm of conspiracy theories, but of the starkest realpolitik.

If the financial trail is correct, and it is rarely wrong, there is the very real possibility that George Soros is betting on John Kasich to cripple the only party that has, with all its faults, resisted the culture of death.