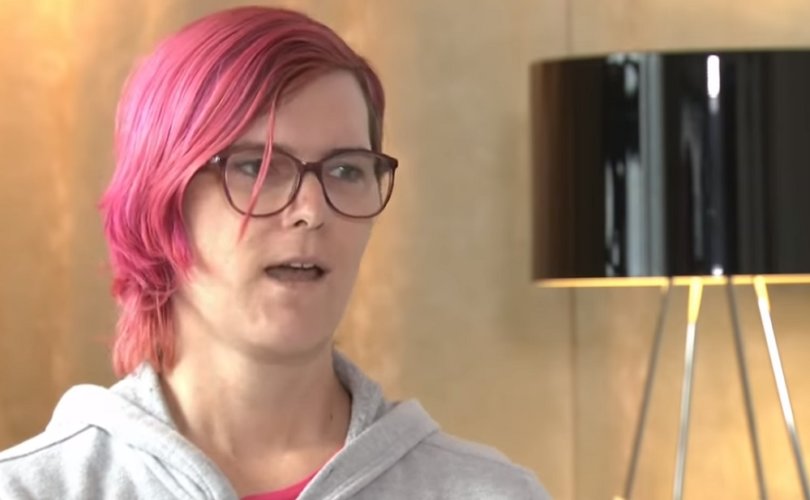 Rhys 'Rachel' McKinnon, who calls himself a woman and competes in women's cycling.Sky News / YouTube

Neither has proven particularly effective at quelling a controversy that needn't exist, isn't going away, and really has only one solution.

Rachel (formerly Rhys) McKinnon went on the offensive after defending his 200-meter sprint title in the women's 35–39 age group at the Masters Track Cycling Championships in Manchester, England, in late October. After setting a world record during qualifying, McKinnon won the race for the second straight year — by four-tenths of a second, or roughly 15 meters in a race typically decided by centimeters.

In the wake of victory, McKinnon blasted those who decry the unfairness of biological males defeating women: “I have yet to meet a real champion who wants trans women banned,” the 37-year-old Canadian said. “If you win because bigotry got your competition banned … you're a loser.”

In touting Eastwood's accolade, both the Big Sky and Montana websites failed to mention that Eastwood had competed as a male — with moderate success — as recently as last year. Eastwood's bio on the Montana women's cross-country website omits the senior's prior running experience entirely.

Something similar happened with CeCe (formerly Craig) Telfer of New Hampshire's Franklin Pierce University after he won the NCAA Division II title in the women's 400-meter hurdles last spring. And yet, Eastwood's transgender status, like Telfer's, still surfaced — not least because The Missoulian, the newspaper that covers Montana athletics in the university's home city of Missoula, ran a preseason profile hailing Eastwood's history-making turn as the NCAA's first openly transgender cross-country runner.

While Union Cycliste Internationale, cycling's international governing body, has a testosterone threshold that biological males cannot exceed if they wish to compete as women, the NCAA has none: The governing body for major-college sports simply requires biologically male athletes to take testosterone-suppressing hormones for at least one year. McKinnon and Eastwood have apparently done enough to comply with the rules of their sports' respective governing bodies.

Still, science is proving that even after taking testosterone-suppressing hormones, biologically male athletes retain competitive advantages over women: The Journal of Medical Ethics published a study in August stating that biological males do not lose significant muscle mass or power after suppressing their testosterone levels below International Olympic Committee standards. The study also found that biological males who suppress their testosterone levels can retain and rebuild their muscle mass, power, and strength through training.

Some, like McKinnon, say transgender athletes should be able to compete according to their gender identity and without suppressing their testosterone levels. They might counter any arguments about unfairness by pointing to Eastwood's performance at the Big Sky cross-country championships on Nov. 2: He placed eighth — proof that biological males are not automatically better than biological women in head-to-head competition.

However, Eastwood never placed higher than 24th at a Big Sky championship meet when running against men. In other words, even if he wasn't faster than every woman who competed on Nov. 2, he was still faster than most — and he displaced one from earning all-conference honors.

In light of the study's findings, the only real way to ensure competitive fairness in women's sports is to keep men out.

Published with permission from WORLD Magazine.