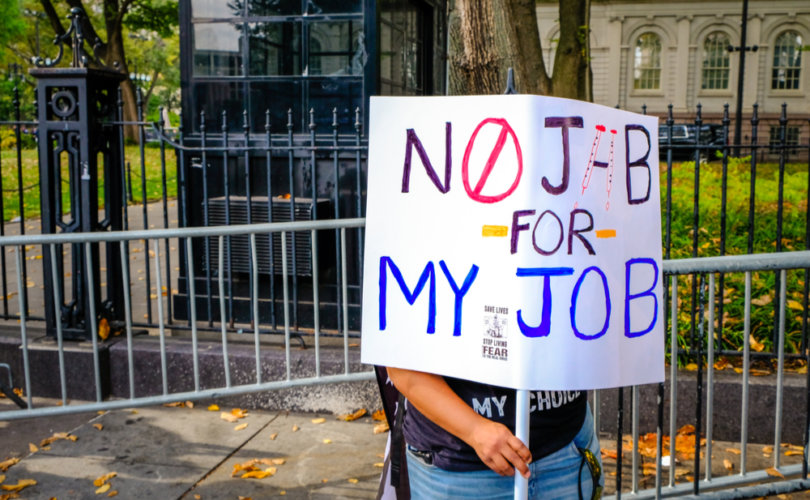 (LifeSiteNews) — Someone asked me why I would care if others lose their jobs over the vaccine, since I am a homeschooling mom of eight and therefore cannot lose my “job.”

You’re right this is not about my job! It’s about defending the rights of others. 15-20% of society has chosen not to take the vaccine — that’s a lot of jobs! That’s a lot of families out of work.

For many families, it’s because of a decision of conscience that both the husband and wife have made together. That’s a lot of children living in poverty in the next few months, including Christmas.

Both the Ontario premier and Canada’s prime minister promised they would never force the vaccine on anyone, yet here we are! Now there’s even talk of people who will be denied unemployment benefits, severance pay, etc.

They have stripped away the rights of those who, for whatever personal reason, have decided not to take the jab. Suddenly, it’s “if you don’t take the jab, you don’t have the right to participate in society. You don’t have the ‘right’ to take your own kids to their hockey games or ballet lessons. You don’t have the right to see a dying loved one in a hospital or your own mother in an old age home. You can’t work at your job (in some cases even if you work from home), can’t collect EI, ride a plane, train, enter a restaurant, bar, or movie theater, or leave the country and even go to your church (in some places).

Ask yourself: How did we get this far? Who’s going to stop this communist mandate that has made people of conscience become second-class citizens, and in one fell swoop has destroyed our charter of rights and freedoms, the very thing upon which this country was formed?

Remember the days when you took a vaccine to travel to a country riddled with typhoid and knew you could go there without any fear of contamination regardless of the people around you, because your vaccine kept you safe? Clearly this is not that kind of a vaccine. It’s not! Yet they’re forcing everyone to take it! Why?

And now children, too, will be forced. Look up Sean Hartman, the young Ontario hockey player who was forced to take it so he could play hockey, and now he is dead! Look up the increasing occurrence of something they’re calling sudden death syndrome.

The COVID vaccine, made using the kidneys of aborted babies, has more adverse events associated with it than any other vaccine we’ve ever had! At two years in and still technically in the trial period (which is three years), any other vaccine with this many adverse side effects would’ve been pulled ages ago. Those who have chosen not to take it for personal, medical or conscience reasons are becoming increasingly aware of the high cost of that choice.

Why did we never try to treat coronavirus? Why did we tell people to do nothing at home till your lips turn blue and then rush to the hospital and be put on a vent? We don’t do that for anything else. We treat people for flu and we have ways to treat people for COVID, very effective ways. But we never invested in any sort of treatment, as a country we only invested in a vaccine. Why?

For years we sat by and did nothing while the Chinese were told their government had every right to mandate how many children they could have, and forced abortion on pregnant women who violated the mandate. We watched that mandate morph into telling the Chinese people what religion they could and could not be because of their “population pandemic.” We watched as they bulldozed Christian churches.

We knew it was wrong, but it didn’t affect us, so we turned a blind eye and bought cheap appliances from them, essentially funding their regime and their communism. Our complacency has come back to haunt us!