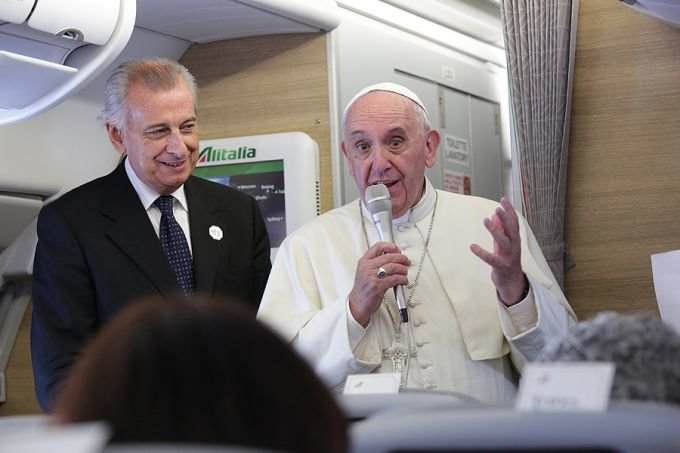 June 29, 2016 (The Christian Review) — Is it the altitude? Is it free cocktails? Is it the urging of a captive media hungry for headlines? Is it a loquacious and friendly Pope who likes to freewheel and think aloud? I just don’t know. But now we are told that Christians “have to apologize for so many things, not just for this (treatment of gay people), but we must ask for forgiveness. Not just apologize – forgiveness.”

I have no trouble apologizing for my misdeeds, even if they are corporate in nature, meaning if they are directed towards a group of some kind.  As a young man, I had to come to terms, and repent of, the racism I was raised with. I’m very grateful to the University of Texas student who taught me that lesson early in my freshman year.  After the initial hurt feelings, my reaction was, “Well, of course he’s right!”

Towards gays and lesbians, I’ve never felt any prejudice. Many of my close friends know this, and there’s no need to say anymore than that. So I am assuming that Pope Francis must not be talking about prejudice of that kind, say, parallel to racism, because to say that all Christians need to apologize casts a much wider net.

My interpretation of the Pope’s remarks is this: Pope Francis thinks that the Church’s teaching on homosexuality, it’s “intrinsically disordered,” and homosexual act, they’re always “sinful,” has created in the minds and hearts of Christians a prejudicial disdain toward homosexuals, lesbians, etc. In other words, Christians have not been able to love them authentically because Church teaching, as well as much non-Catholic, has labelled them and their sexuality as unnatural and morally wrong.

I simply don’t agree, and, thankfully, I don’t have to in order to be a faithful Catholic. Why? Because I don’t buy the argument that anyone who believes another person, or group, to be sinful or fundamentally disordered, is unable to love them, care for them, befriend them, feel compassionate towards them.  That’s refuted by experience and example over and over.

I think immediately of how Cardinal John O’Connor emptied bedpans in New York City’s AIDS clinics. The creation of the Terrance Cardinal Cooke Health Care Center on Fifth Avenue that was founded as a health care center for AIDS patients. A book could be written, probably in multiple volumes, on other examples of caring for those with whom we have such disagreements about lifestyle and sexual orientation.

Pope Francis did go on to spread the net even further,

“I think that the Church not only should apologize… to a gay person whom it offended but it must also apologize to the poor as well, to the women who have been exploited, to children who have been forced to work.”

Why not apologize for all the evil in the world, or all the evil that has ever been perpetrated by anybody, anywhere? Doesn’t that make apologies meaningless, and the request for forgiveness as well?  I know only one person who took on the “sins of the world,” only one man who was capable of doing anything substantial about those sins, namely, offering a way of redemption to every fallen, sinful human being.

There are reasonable ways to talk about our responsibility towards the needs of others, even around the world. Reasonable within a Christian framework, I mean. But to begin by taking responsibility for people you’ve never met, or for feelings you’ve never had, is to affirm that our sins are the products of social structures, rather than personal choices and actions.

If I must apologize to homosexuals, lesbians, the poor, exploited women and children, then that can only be because I belong to a society whose inherent class divisions necessarily do harm to certain classes of people, and create those classes at the same time. This is a Marxist point of view, I am sure the reader recognizes it, but it’s a viewpoint now adopted by “social justice” Catholics.

Pope Francis appears to be saying that we sin necessarily due to the place we find ourselves in a layered society, compounded by the teaching of the Church towards gays and lesbians. Thus we must apologize en masse. This is why I cringe whenever Pope Francis gets on an airplane.

This article was originally published on The Christian Review and is re-published with the permission of the author.