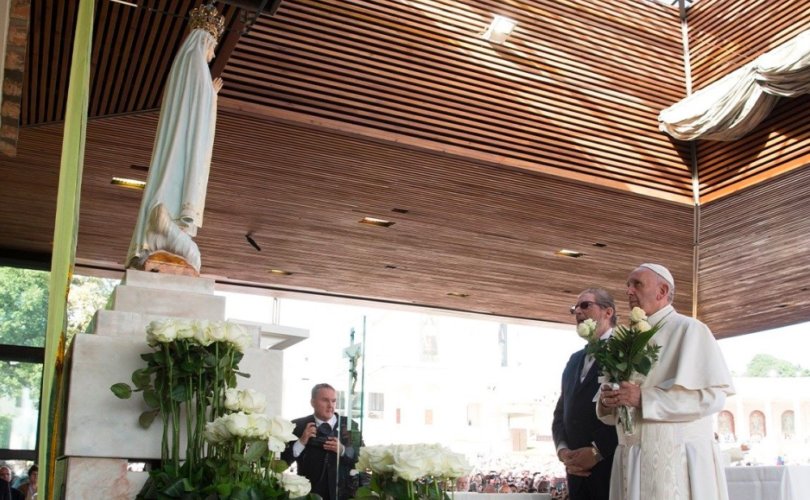 Pope Francis before the statue of Our Lady of Fatima, PortugalVatican News screenshot

VATICAN CITY (LifeSiteNews) – On the day of Pope Francis’ consecration of Russia, the head of the Pontifical International Marian Academy continued the Vatican’s past stance in trying to separate Our Lady of Fatima from the March 25 prayer of consecration, raising questions as to why one of the Church’s chief Mariologists is downplaying the role of Our Lady.

On March 25, Pope Francis prayed a prayer of consecration and entrustment to Our Lady, consecrating “the Church and all humanity, especially Russia and Ukraine” to the “Immaculate Heart of Mary.” The event came in answer to a request by the Ukrainian bishops, who had specifically asked the Pope to “perform the act of consecration to the Sacred Immaculate Heart of Mary of Ukraine and Russia, as requested by the Blessed Virgin in Fatima.”

Yet only hours before the consecration took place, Vatican News published an interview with Fr. Stefano Cecchin, OFM, the president of Rome’s Pontifical International Marian Academy, who made strong efforts to completely disassociate the consecration from Our Lady of Fatima’s request, and instead highlight the role of “synodality.”

Explaining away the requests of Fatima as ‘synodality’

Part of Our Lady of Fatima’s requests in 1917 and 1929 were that Russia would be consecrated, and that the Pope would “order” the bishops to join him in this momentous action.

However, Fr. Cecchin ignored this crucial aspect behind the events of March 25, and instead explained Pope Francis’ request for all the bishops to join him in consecrating Russia and Ukraine as simply being part of “the concept of synodality.”

Answering why the bishops had been asked to join the Pope, Fr. Cecchin stated, “It seems to me that this choice is linked to the concept of synodality that Pope Francis continues to reiterate. The Pope represents the Church, the sense of unity, but unity with the Church and in the Church, which is — as he calls it — our common home.”

Fr. Cecchin even explained Francis’ request to be joined in prayer as being related to the Pope’s “blasphemous” papal encyclical on human fraternity, Fratelli Tutti, saying, “So we are not saved alone, as Pope Francis reminded us in Fratelli Tutti and always together we must ask God for the salvation of the world.”

‘Where two or three are gathered in my name, I will be in the midst of them,’ the Gospel reminds us, and Pope Francis emphasises that the journey of saving the world we must make together, not alone. This is why at this time the whole Church must be united, as in a great Synod, a great Council, in which God is asked to intervene.

Studious avoidance of mentioning the request of Fatima

Fr. Cecchin’s interview thematically echoed something that has been notable in both the Vatican and Pope Francis’ response to the Ukrainian bishops – namely, that while the Pope was happy to make “a” consecration to the Immaculate Heart, he avoided making reference to their request that he would do it “as requested by the Blessed Virgin in Fatima.”

Such is not to argue that Pope Francis did not make the consecration on March 25, as eminent Fatima scholars have argued that the prayer did indeed fulfill the necessary conditions, although others have disagreed. The Pope also made the consecration before the statue of Our Lady of Fatima in the Vatican, clearly linking the act to Fatima.

But Pope Francis’ curious verbal avoidance of linking the consecration with the specific one requested by Our Lady of Fatima was repeated by Fr. Cecchin, whose importance in the Mariological community is not to be underestimated. Cecchin constantly sought both to divert attention away from the request of Our Lady to consecrate Russia and to downplay the events of March 25.

Rather than saying that Pope Francis was fulfilling the request of Fatima, Cecchin argued that “in the most difficult moments the name of Mary has always been invoked,” and that by making this consecration, Pope Francis was simply acting in “continuity with the teaching of the Church.”

Fr. Cecchin revealed that he was on the verge of leaving for Fatima himself to attend a conference on the 1931 consecration of Portugal to the Immaculate Conception. Yet notwithstanding this immediate geographical link and his impending visit to the shrine, he continued to belittle the importance of the Fatima link. Fr. Cecchin even managed to downplay the visit of Papal almoner Cardinal Krajewski to Fatima – where the Cardinal was joining Pope Francis in making the consecration – as simply being in line with Portuguese history.

“The apparitions of Fatima should be seen in the context of the path taken by Portugal,” he said. “Fatima, therefore, becomes the apex of this manifestation which then went beyond the borders of Portugal to become a reality, therefore an apparition, which is valid for the whole world.”

“So, it is not just a question of entrusting Russia and Ukraine to Mary’s heart, but everything that is injustice, that is against the right of the human person, that is mafia behavior,” Cecchin added. “All these realities we want to transform together through Mary to make a better world.”

Why is the Vatican so unwilling to link Our Lady of Fatima and Russia?

As noted on these digital pages already, for many decades the Vatican made a studious avoidance of making the consecration of Russia as Our Lady asked. Questions have been raised about why the Vatican refused to obey a request from the Mother of God for decades, with links made to the secretive Metz Pact, signed by the Vatican and Moscow in 1962.

Under that agreement, the “Vatican Secretary of State, since October 1962, has agreed not to condemn the errors of Russia” – an agreement that is still in place to this day. Commenting on the Metz Pact, Fatima expert Christopher Ferrara wrote, “This policy, which is still in place today, is fundamentally and therefore directly opposed to Our Lady of Fatima’s specific condemnation of the errors of Russia.”

For the explicit mention of Fatima is intrinsically linked to the explicit condemnation of the errors of Russia. In June 2000, Cardinal Tarcisio Bertone and then-Josef Cardinal Ratzinger wrote that:

Fatima is undoubtedly the most prophetic of modern apparitions … especially to the frightening vision of hell, devotion to the Immaculate Heart of Mary, the Second World War, and finally the prediction of the immense damage that Russia would do to humanity by abandoning the Christian faith and embracing Communist totalitarianism.

Also on March 25, Vatican News published an interview with Father Kirill Gorbunov, Vicar General of the Archdiocese of the Mother of God of Moscow, who noted how “this Act of Consecration is very closely tied with the Fatima private revelation of Our Lady, and the Russian Orthodox Church is officially quite suspicious toward this Fatima revelation, especially about the conversion of Russia.”

LifeSiteNews has already questioned whether this motive could have been behind the repeated refusal to explicitly name Russia in the previous attempts Popes have made at the consecration. Could it be that this same spirit is not only motivating the Popes but is endemic among Rome’s Mariologists, so that instead of promoting devotion to Our Lady and expounding on the relevant aspects of theology, they are instead choosing to downplay her request, and her role in the Church, in order to conform to shady Vatican-Moscow politics?