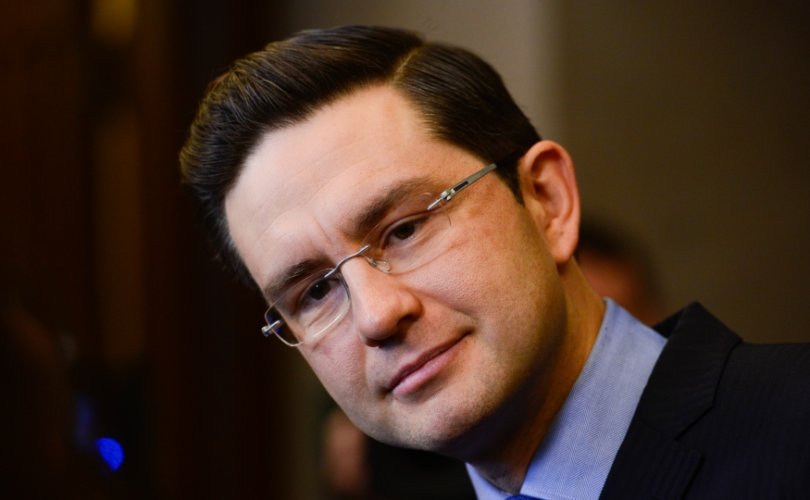 (LifeSiteNews) – Why is Pierre Poilievre avoiding the hot-button issue of family policies in this Conservative Party of Canada (CPC) leadership race? And why is the media letting him get away with it?

In the past year, the Liberal government’s plan to provide universal low-cost day care across Canada has generated intense public interest in the issues of child care and family policies. All the provinces have now signed on to the federal plan, with Ontario (the last to join) signing on in late March.

Two CPC candidates—Jean Charest and Leslyn Lewis—continued the momentum early in the leadership race by proposing to keep the current deals and to add more benefits to families. Poilievre, considered a front-runner in the race, promised to offer a plan but never did so.

Surprisingly, the media largely ignored this issue— neglecting even to chastise Poilievre for failing to deliver on his promise. No one pressed him on whether or not he would keep the recently-ratified federal/provincial child care agreements, which through government subsidy keep the cost of daycare at $10/day.

On April 12, Charest said he would keep the existing child care deals. He also promised to begin Canada Child Benefit (CCB) payments in the second trimester of pregnancy. He proposed a “Choice in Child Care Tax Credit” that “would rebate up to 75 per cent of child care expenses for lower-income families.” Charest also promised to extend parental leaves to two years.

Charest claimed Poilievre was “questioning whether he would” undo the new Canada-wide child care deals.

Lewis soon followed Charest with her update entitled “Building Stronger Families.” Like Charest, Lewis promised to begin CCB payments in the second trimester of pregnancy and to extend parental leaves to two years.

Lewis also promised to double CCB payments for families with children under six years old who do not use subsidized daycare. She would also reintroduce the Family Tax Cut income splitting program for families with children under 18, which could result in tax credits of up to $2,400 per year. CTV News reported Lewis as saying that she would keep the current child care deals.

Still no word from Poilievre.

The two other candidates in the race—Scott Aitchison and Roman Baber—also did not offer any family policies. When contacted, Aitchison’s team stated that their candidate “has been proposing many policies that will help families” and referred me to a list of his policies—none of which mentioned families. The team told me that if I would share for which publication I was writing, they would be “happy to elaborate”—a message conveying the odd impression that the information they provide changes depending on who requests it.

Team Baber did not reply to my line of inquiry at all.

Team Lewis gave the same answer as did Team Aitchison: they promised to answer my questions and, “in the meantime,” could I tell them for which publication I was writing? When I told them I would be happy to do so, but not as a prerequisite for answers, they did not respond.

The silence on the issue of family policies is particularly surprising from Poilievre, who has been quick to rebut jibes from his leadership rivals.

As recently as December 13, 2021, Poilievre said he would cancel the new federal child care plan, stating, “we do not believe in a $100 billion slush fund.” Since then, he has been silent on the issue.

Poilievre’s silence is all the more surprising since, only a short time ago, he presented himself as a champion of family policies. It was Poilievre who, as minister of employment and social development under Stephen Harper, first introduced the CCB in 2015, calling it “Christmas in July.”

Experts saw the CCB as designed to attract two new bases of support for the Conservative Party: immigrant communities and mothers. Families tend to concentrate in suburban ridings around major centers that, at that time, might have provided enough Conservative votes to swing the federal election.

In 2015, Poilievre defended the CCB, an expanded child benefit that pays families a monthly, income-adjusted sum per child, by stating, “Families have supported the Conservative Party because the Conservative government has supported families.”

When Poilievre announced the CCB in 2015, he donned a Conservative Party golf shirt. Opposition MPs lit into him for putting party brand onto public money.

Fast forward to 2022: now all the provinces have signed on to the federal plan to provide $10/day child care across Canada (Ontario was the last province to sign, in late March). Two CPC leadership candidates pledged to keep these deals while offering even more benefits to families.

When it seemed like cash transfers to families were just the thing to woo young families, Poilievre donned his party’s logo, in what seemed like an effort to identify the CCB with the Conservative Party.

But now that subsidized day care seems here to stay, Poilievre is finding it hard both to rehearse his arguments against it as well as to promote parental choice. To do so might alienate the very demographic—young families—he and the Conservative Party’s top brass sought to target in 2015.

Freedom has been a key theme of Poilievre’s campaign. His campaign website, with the address “pierre4pm,” opens with bold headlines urging Canadians to “take back control of your life” and to join him “in making Canada the freest nation on earth.” In his video message that follows, Poilievre promises to restore economic freedom and a list of personal freedoms (speech, health, worship). Significantly absent from the list is freedom for parents to choose care for their child—at least, with government help.

In the new climate of 2022, the topic of family policies may have become just too hot for Poilievre to handle.

The media seems content to let the issue fall where it may. During the four official leadership race debates, the issue of family policies remained in the wings. Even the federal government’s announcement, on July 20, of increasing the CCB was not enough to bring the issue back into the public eye.

Without Poilievre’s punchy tweets on the issue, the family policies of his rivals, Charest and Lewis, likewise fell to the wayside.

With only one month to go before the leadership election, the issue of family policies has all but been filed away as the campaign issue that could have been. And shutting the cabinet drawer will be a smiling “Team Pierre 4 PM.”