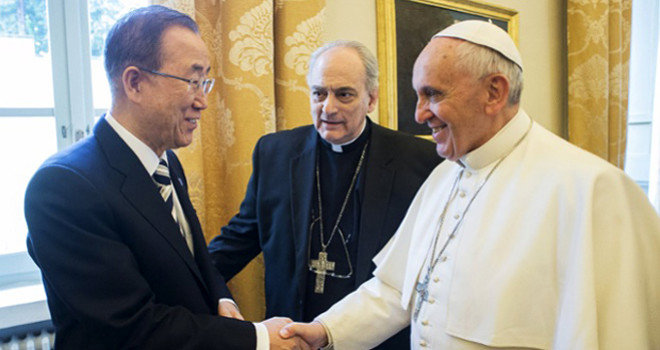 May 7, 2015 (CrisisMagazine.com) — The Pontifical Academy of Sciences had its one-day global warming conference on April 28. Not unlike a certain synod, it ended with the issuing of an anticlimactic pre-prepared climatic document “Climate Change and The Common Good: A Statement Of The Problem And The Demand For Transformative Solutions.”

Gist: we are soon doomed unless we “do something.”

More on that in a moment. First, the Big Question. Why? Why is the Catholic Church entering into the fray of doubtful global warming science? Why now and why with such shrill apocalyptic exaggerated rhetoric? Why strident calls for supranational government control at the same time the actual evidence for doom grows weaker and weaker?

Consider this. Used to be in the West when the Catholic Church spoke, people listened. Reporters and politicians would come calling before writing articles or making decisions and ask, “What say you, Mr. Bishop?”  And the people, when they heard what the Church had to say, listened. They considered. Sure, they sometimes rejected, perhaps even more often than they heeded. But the Church was an influence. And it liked being one.

Not so now. The West has these past fifty or so years assumed an adversarial stance towards our ancient and venerable institution. The press, politicians, and people no longer care what the clergy has to say on designer babies (i.e. eugenics), abortion, homosexual acts, same-sex “marriage”, you name it. Not when a recalcitrant Church disallows female priests, divorce, and every other thing the secular salivate over.

This volte-face must sting, particularly for the old timers who lived during the Good Old Days of deference. The longing they feel probably accounts for why certain of our more mature clergy (and their recruits) work vigorously to steer the Church towards political shoals and away from deep spiritual water (who doesn’t love nautical metaphors?).

Now to the global warming conference. The reader should understand Yours Truly is a certified expert in these areas, a genuine climate scientist, with a specialty in the goodness and usefulness of models, the very kinds of models which predict our doom.

The models are wrong. And have been for decades.

How do I know this? Here’s a sentence from an open letter skeptics presented to the PAS (to hand to Pope Francis) at its conference (I am a signer of this letter):

[T]here has been a growing divergence between real-world temperature observations and model simulations. On average, models simulate more than twice the observed warming over the relevant period. Over 95% of the models simulate greater warming than has been observed, and only a tiny percentage come tolerably close.

But some in the Church and most politicians want something to solve. We’re reached the point where politics dictate science. This explains why Senator Barbara Boxer recently attacked scientists like Yours Truly for (her words) disseminating research designed to “confuse the public.”

Finally to the PAS document itself. There is scarcely anything in it that is scientifically accurate. Everywhere, it assumes what it seeks to prove, and uses model-based predictions of doom as proof the models are correct. The document is a dismal exercise in special pleading and is painful to read. It would take a small book to detail every mistake, so we’ll have to stick to the most curious.

The opening sentences of its “Declaration”:

Unsustainable consumption coupled with a record human population and the uses of inappropriate technologies are causally linked with the destruction of the world’s sustainability and resilience. Widening inequalities of wealth and income, the world-wide disruption of the physical climate system and the loss of millions of species that sustain life are the grossest manifestations of unsustainability.

Causally linked are powerful words in science. It means we know why things happen. But we do not. If we did, our models would make good predictions. Wealth and income are growing more inequitable, but is that caused by blundering governments or a “world-wide disruption of the physical climate system”?  Answer: there is no disruption. The claim that millions of species will turn in their dinner pails doesn’t even border on scientific malfeasance. It crosses over and enters into the sorrowful land of Deliberate Exaggeration.

It is a well trodden realm. PAS says “Global warming is already having major impacts on extreme weather and climate events.” This is false. Unless by “impact” they mean the observed diminution of extreme events? “Collectively, this warming and the extreme events it has brought in its wake, such as heat waves, intense storms, and forest fires….” Ah. They do not. What else can I tell you except that this statement is demonstrably false? The document contains many of its brothers.

Twenty years ago we were told there was still time, but only just. Action had to happen now, else the tipping point would be breached. We survived. But the PAS again says there is still time. If we act now. The call for action is proof of the theory bruited above: “The Catholic church, working with the leadership of other religions, can take a decisive role by mobilizing public opinion and public funds….”

How? By “reorient[ing] our attitude toward nature and, thereby, toward ourselves” and by recognizing “religious institutions are in a special position to promote” sustainability. As I wrote elsewhere, if you think global warming’s bad, wait till you meet sustainability. Sustainability is the fundamentalism that will replace all other environmental causes. Global warming made itself vulnerable by exposing itself to verification. Sustainability is immune to testing. It is taken on faith.

As I wrote, “True Sustainability is a goal ever disappearing into the distance, one which can never be reached, but which must be pursued with ever increasing vigor.” The PAS document is suffused with sustainability; the word or its variants appears dozens of times. They say we are engaged in “unsustainable consumption,” that climate change will “seriously threaten global sustainability,” that we must “save as much of the sustainable fabric of the world as possible,” that we must celebrate “living together in comfort and sustainably,” that we must “develop a sustainable relationship with our planet.”

And what is the Pontifical Academy’s definition of sustainable?  You guessed it. They never give one.