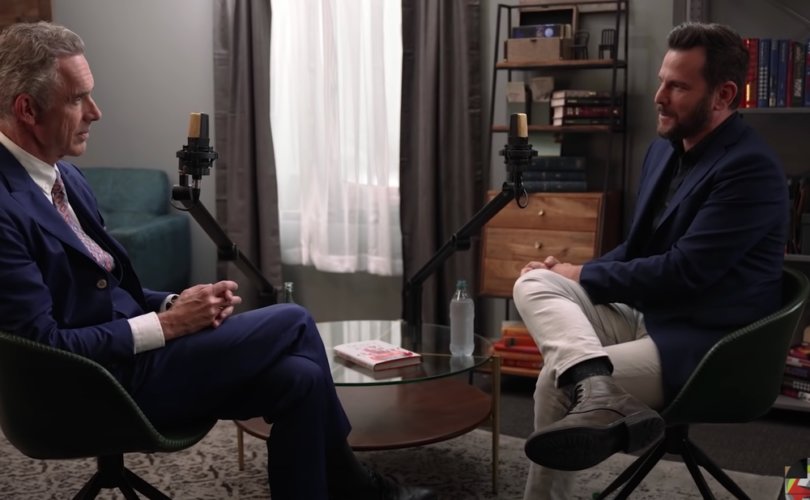 (LifeSiteNews) – The Daily Wire, started by famed social conservative Ben Shapiro, is supposed to be at the frontlines of our culture wars. Shapiro and others, we were assured, wouldn’t retreat on tough issues even when the culture did.

So why, then, is that same platform promoting a grave distortion of the family? I’m talking about when Dr. Jordan Peterson, one of DW’s newest contributors, hosted an episode in which he and the publication lent credence to commentator Dave Rubin’s pursuit of same-sex surrogacy.

“Gay Parenting: Promises and Pitfalls,” read the YouTube headline from DW. A now-deleted tweet touted Peterson and Rubin discussing “the evolution of his lifestyle…and the uncharted territory of gay fatherhood.”

While Peterson was somewhat measured in his comments, the overall thrust of the episode and their exchange was that same-sex surrogacy is a morally valid choice. Reinforcing this point, Peterson held up conservatives who favored same-sex “marriage” as more “enlightened.”

Rubin went so far as to suggest that conservatives should consider him a hero for starting a “family” rather than indulging in the empty, promiscuous lifestyles of the “LGBT community.” This of course ignores the third option, which is to embrace the truth through Jesus Christ and cooperate with His grace to overcome sinful behavior.

It’s bad enough that DW promoted a mockery of marriage and family life. Its actions also point to the kind of self-serving cowardice that its personalities regularly denounce in their content. Just last month, Shapiro penned an op-ed in which he lamented the “betrayal” that Fox News had served conservatives when one of its news segments endorsed “transgenderism.” Matt Walsh similarly blasted the cable news network as he has with other businesses that embrace wokeness.

Is there any doubt that Walsh or Michael Knowles – who touts his conservative bona fides by defending monarchy – would denounce a Fortune 500 company for promoting same-sex surrogacy? Or that Shapiro, who penned “Primetime Propaganda,” would level a full-throated assault on this type of program if major networks aired it 10 years ago?

Contrary to the left’s caricature of conservatives, these criticisms don’t stem from an “eww, gay people” disposition. As I’ve mentioned before, I struggle with same-sex attraction and empathize with others who do as well. The issue is that in promoting same-sex “marriage” and surrogacy, conservatives are abandoning the core of their Judeo-Christian worldview – apparently to accommodate cultural and political pressures – and embracing intrinsic evil.

In some ways, DW’s growing success as a conservative organization is encouraging. But in others, it has pointed to a much deeper hypocrisy within the outlet.

Walsh and his “What is a Woman?” documentary have done extremely well. He’s helped elevate the central, damning question surrounding “transgenderism”: namely, that it rests on illusory and ever-shifting criteria for how to define particular genders.

Focusing on women likely isn’t a coincidence either. Walsh has continually suggested that gender ideology is misogynistic in that it attempts to erase true womanhood. Like radical feminists, he argues that “trans women” (men who pretend to be women) are making a mockery of females’ unique, biological features and devaluing those same features in the process.

So, why is the DW backing another modern heresy that does just that? Social conservatives may be tempted to focus on the same-sex nature of Rubin’s arrangement. But it’s important to recognize the way he is exploiting womanhood.

Surrogacy, Rubin suggests to Peterson, isn’t just “womb renting” because the mother is voluntarily seeking to use her procreative capabilities for some perceived good. This argument, however, draws from the faulty libertarian emphasis on choice over morality.

Our choices obviously have consequences outside of our immediate situation. Rubin himself recognized as much when he said he wanted to provide a “map” for others in his situation. But his solution to the loneliness and emptiness of the gay lifestyle – commissioning children via surrogacy – is ultimately based on transaction rather than human dignity. After all, even he described the process of searching for an egg donor as “sort of like Tindr.”

And he’s right. Both Tindr and egg “donation” (which is a lucrative market) treat people as commodities to be purchased or efficiently consumed in the market. Rather than honoring woman’s procreative abilities, the Tindr-esque model exploits her body. Surrogacy, more generally, uses women’s bodies and discards both her and her personhood once she gives birth. This process reeks of the reductive, biological essentialism that “trans” activists often claim to indict with their “I’m more than my genitals” arguments.

Rubin’s surrogates won’t be able to pursue one of the most important relationships they’ll have as human beings.

More pressing, Rubin’s children won’t grow up with the nurturing connection found through the only other humans they will have known for the first nine months of their existence – the surrogates – or their biological mother (in Rubin’s arrangement, a surrogate is “matched to each man with a shared egg donor”).

Instead, they’ll likely encounter confusion from seeing their actual mother discarded and replaced with other female relatives who have nothing close to the same type of familial obligation that comes with biological maternity. Adoption, of course, falls short of what nature intended and is considered a practical solution to a less-than-perfect situation. Nonetheless, it’s a solution ordered toward the needs of children rather than the desires of adults.

Rubin defends surrogacy while suggesting that conservatives are trying to make the perfect the enemy of the good. He and Peterson do this by arguing that opposite-sex parenting is ideal but the “reality” of same-sex couples indicates another path is permissible.

Surrogacy, though, isn’t an ethical solution to a difficult problem. It’s an unnecessary evil that corrupts society and the individuals participating. Rubin would apparently like you to believe that he is a pioneer for a “new conservative world,” as he put it. But there is no conservatism when you eschew moral tradition and natural law. That’s libertarianism or some diluted form of progressivism.

Let’s be clear, Rubin is not making lemons out of lemonade as adoptive parents often do. He’s needlessly putting innocent children in an adverse situation for the purposes of his own, God-imitating pursuit of self-actualization.

To Dave and other “gay” men: Our interest in “self-fulfillment” isn’t worth the risk surrogacy creates for innocent children.