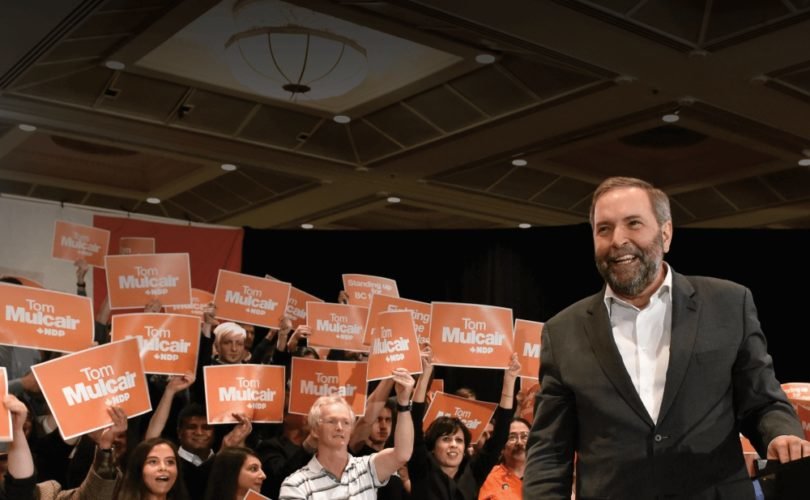 September 25, 2015 (LifeSiteNews) — The New Democrats have decided to continue supporting a Toronto-area candidate who came out saying he’s personally opposed to abortion and homosexual ‘marriage’ on biblical grounds. Calm down if you think the NDP just did a 180 on its extreme pro-abortion and anti-family-values platform. It didn’t.

The party that used to support the “little guy” is standing by their candidate KM Shanthikumar because they know that deep down he’s not really pro-life and pro-family, at least not enough to stand by his convictions when they matter most for his potential constituents, that is, when it comes to voting in the House of Commons.

When pro-abortion and pro-homosexual rag The Star came knocking on his door appalled by his statements, Shanthikumar — who is a priest in Scarborough’s Tamil community — assured them that his views on life and marriage run barely skin deep.

Shanthikumar is one of those types who makes the case that while he is ‘personally opposed’ to abortion, he thinks it’s OK for other people to have their pre-born children murdered by abortionists. He somehow thinks that there’s nothing wrong with separating his personal values from his professional life.

This is as absurd as saying that while you’re personally opposed to slavery, or incest, or domestic violence, or rape, or bribery, you won’t impose your views on others, because after all, they’re simply your personal views. If a political candidate were to say this, he would be rightfully booed off the stage into shame and oblivion.

Let’s get this straight: Abortion is the greatest human rights violation of our age. It denies a child the most fundamental of human rights, the right to life. These are little human beings we are talking about here. It’s never OK to be merely ‘personally opposed’ to the gravest violations of the rights and dignity owed to others.

Shanthikumar wrote on his campaign website that he is “committed to building a fairer, more compassionate society.” It’s too bad that his society doesn’t include everyone, especially the pre-born. His ‘personal views’ unfortunately allow him to discriminate against the youngest and most vulnerable in our society.

Luckily, pro-lifers voting in the Scarborough – Rouge Park riding have Conservative candidate Leslyn Lewis who appears to be the real deal when it comes to standing by convictions.

Lewis replied to a Campaign Life Coalition questionnaire that if elected she would not only “strive to introduce and pass laws to protect unborn children from the time of conception (fertilization) onward” but that she would “support all legislative or policy proposals that would result in a meaningful increase of respect and protection for unborn human life.”

Now that’s what I call a principled stand and a candidate worth supporting.