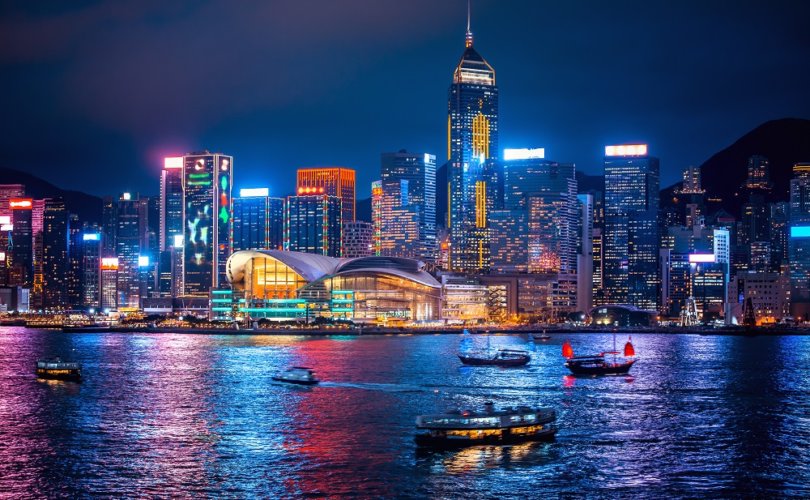 September 3, 2019 (American Thinker) — The citizens of Hong Kong (H.K.) have taken to the streets to protest Beijing's attempt to annihilate their democracy. Beijing, through H.K.'s chief executive, Ms. Carrie Lam, recently proposed a new law allowing Beijing to extradite anyone in H.K., citizen or foreign national. This new law would empower China to remove anyone from H.K. to be tried under Beijing's courts and judges, all of whom are beholden to the ruling class of China.

H.K. correctly perceived that this law was a direct threat to its democracy, because the presumption of innocence would no longer exist. In effect, this new rule meant that Beijing could simply label someone an enemy of the state deserving incarceration, without having to provide any proof of any crime. China could at any time for any reason street-sweep H.K. of any and all dissidents, creating a level of intimidation that would eventually shut down H.K.'s democracy for good. This proposed new law would anoint Beijing as the master of all H.K. even though H.K. was supposed to enjoy self-rule until 2047, according to the Joint Declaration that transferred H.K. from British to Chinese authority.

H.K. has long enjoyed a reputation as one of the freest economies in the world and recently ranked 35th in the world for overall GDP. H.K. makes sure that its youths are taught the origins of their prosperity, as well as having opportunities to study economics, commerce, and history. Most students grow up knowing that governments can either succeed or fail at providing an opportunity for the average citizen to prosper. If China is allowed to remove H.K.'s self-rule, H.K. citizens understand that their freedoms, their way of life, and their opportunity to succeed will all but disappear. This is why the H.K. protests have erupted so quickly and with such force.

Here in the United States, we are in the midst of a similar struggle, where those on the Left share Beijing's desire for totalitarian control. As is so clearly laid out in the Democrats' proposed Green New Deal, the Left desires government to be empowered to dictate almost all aspects of life in America, including but not limited to medical care, energy usage, food consumption, housing, taxes, and so on. Unfortunately, many Americans haven't got the street smarts to see where the Left wants to take them. They haven't been educated in American history, government, or economics, but instead have been taught by the public schools and popular culture to regard America as the world's greatest villain. Our schools are designed to convert our children into leftist acolytes who believe that America is racist, capitalism is racist, Republicans are racist, and so on. Literally, from kindergarten on up, the message stays the same: things are so bad in America that fundamental change is the only possible solution. Our youths are told every day that the best thing America can do now is to atone for our past sins by peacefully transferring our freedoms, our guns, and our wealth to our betters in Washington so they can somehow make everything better.

China is pursuing the same goal that the American Left pursues: full governmental control of all citizens. China will soon be rolling out its social credit score, which will be used to reward compliance and punish non-compliance with government dictates. H.K. sees its future with the social credit score, realizing that now is the moment to stand up, say no, and resist the oncoming totalitarian wave.

American Millennials seem to be largely unaware that they are being conscripted in the battle to change America into a totalitarian country where personal freedom is tiny but the government is huge. So far, many of our Millennials haven't exercised their societal due diligence to determine if turning America into Venezuela or China is really their best choice.

But perhaps there is more hope for our country's future than many might expect. A ray of hope can be found in the fact that only about 20% of Millennials trust government and their news sources. This healthy skepticism may prove to be a deciding factor as the evidence grows daily that a future America designed by the Left is going to be nasty and brutish. For example, Americans still enjoy the right to peaceful assembly and protest, unless you happen to be on a college campus or in one of those cities where leftist politicians forbid the police to aid protesters being attacked and beaten by leftist mobs.

So we see in Hong Kong that the populace is running away from totalitarianism, with members risking their health, their livelihoods, their freedom, and perhaps even their lives to join in the protests. Besides wearing heavy duty goggles, helmets, and even gas masks to protect themselves from being injured by the thuggish police, many of the protesters wave American flags, a dramatic visual known worldwide as a powerful symbol of freedom. How ironic it is that H.K. protesters use the American flag to signal to the world their intense drive to preserve their freedoms while American companies publicly disparage the same flag in hopes of selling more sneakers.

Similar to the H.K. protesters, America's Founding Fathers risked their lives and fortunes as they publicly proclaimed the truth that all men are created equal, and all have the right to life, liberty, and the pursuit of happiness. America, by and large, with some notable failures, has continued to travel on the road of truth. However, we now have a strong push from those on the Left who do not value truth, but instead seek increasing personal and political power. The Left in America is powerful, and loud, and it controls academia, most of mass media, and most of the culture. But, be it H.K. or America, the Left can continue to prosper only where it suppresses truth. China threatens H.K. with the suppression of truth by brute force. In America, we see suppression of truth occurring in both our public schools and in our popular culture. Mass media serve as a willing megaphone for the Left, delivering a constant stream of inflammatory and dishonest rhetoric. The Left is very effective at targeting the emotions of the under informed with a constant diet of incendiary speech and misinformation.

So will America choose to embrace the move toward socialism and totalitarianism being offered by the Democrats running for president in 2020? Will voters heed the message H.K. is sending, or will voters decide that they will be better off by allowing the government more and more control of their lives?

The answer to these questions will be revealed on Election Night 2020, when America will choose her future direction while pausing for a moment at the intersection of truth and emotion. Will America turn left and allow totalitarianism to rule our country, or will America turn right, choosing to govern ourselves with truth and freedom?