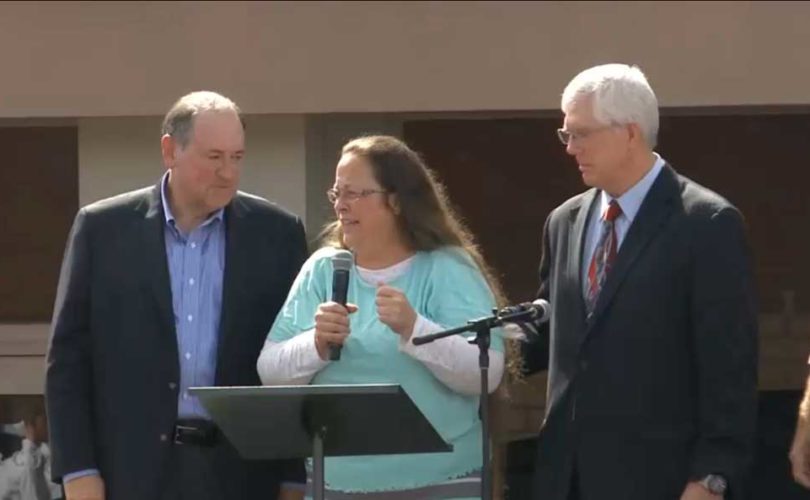 September 9, 2015 (Catholic Culture) – So if she could not, in good conscience, issue marriage licenses to same-sex couples, why didn’t Kim Davis resign from her job as county clerk? I’m not privy to her reasoning, but I have my own reasons why she should not be expected to resign.

Ordinarily, when a public official faces a crisis of conscience, the cause is either a change of responsibilities or a change of heart. Suppose a building inspector is asked to approve construction under a new code, and he firmly believes that the new buildings will be unsafe. If he cannot convince his superiors to amend the code, he should resign; he cannot carry out his responsibilities in good conscience. Or suppose (to use an example borrowed from a friend) an executioner experiences a religious conversion, and decides that capital punishment is immoral. He too should resign; he cannot carry out the duties for which he was hired.

Kim Davis cannot, in good conscience, certify that two people of the same sex are eligible for marriage. It is perfectly reasonable to argue—as Ryan Anderson has persuasively argued—that the courts should find some accommodation, so that she can preserve her integrity and yet homosexuals can obtain marriage licenses. Indeed, as I write this little essay, I learn that Judge Bunning, who sent her behind bars, has now ordered her release, provided that she no longer interferes with the process of issuing licenses. But that does not resolve the problem, in my view.

Imagine that you teach arithmetic in an elementary school. Imagine that a few misguided individuals take control of the local school committee, and push through a nonsensical new curriculum that makes it more difficult for students to learn the basics of math. You can complain, you can work to elect more sensible people to the school committee, but as long as the new curriculum is in force, you have to choose: comply with your new job description, or resign.

But now imagine that the school committee, drunk with power, rules that henceforth you must teach students that 2+2=5. You cannot do that. Moreover, you cannot meekly step aside and allow some other, more compliant teacher to tell young children that 2+2=5. This is not a matter of preference or of personal belief. It’s a matter of fact.

Kim Davis was asked to certify that two men, or two women, could be appropriate partners in a marriage. She could not, because to do so would contradict what she knew—what you and I know, what everyone has known for centuries—about the nature of marriage. Nor could she allow her deputies, working under her direct supervision, to testify to an untruth.

Father James Schall made this point for Catholic World Report:

Let’s begin with the word “marriage.” This word means the union of a man and a woman for the purpose of begetting, raising, and educating their children in a home. If an “arrangement” between two human beings cannot instigate or beget a human child, it is not a marriage. If we insist on calling it a “marriage,” we speak equivocally. That is, we lie to ourselves about what is.
The word “belief” is not the appropriate word for marriage. Marriage is a fact, not a “belief.” To imply that it is a “belief” means, in modern context, that it has no grounding in reality. It is improper to call marriage a “belief.”

Virtually every newspaper account of the confrontation in Kentucky has made the point that Kim Davis is a Christian. That is true but irrelevant. It is not because of her religious faith that Davis understands the nature of marriage. Non-Christians, too, have always understood (until the mania of the past few years) that marriage is a union of man and woman. That understanding was firmly in place long before the time of Christ.

If a court can redefine marriage, it can redefine any institution touched by the law. If the term “marriage” means no more or less than what five justices happen to prefer at the moment, then the most fundamental institution in society is at risk.

Are you really married, or could the state suddenly declare your union invalid? Could the government take custody of your children, having ruled that there is nothing special about the bond between parent and child?

With the Obergefell decision the Supreme Court overthrew not only the laws of the several states, but the laws of logic as well. In a blatant display of illegitimate power, five justices ordered not merely a redefinition of “marriage” but a redefinition of reality. And to date, no one but Kim Davis has actively resisted that usurpation.

This article appeared on Catholic Culture and is re-published with permission.