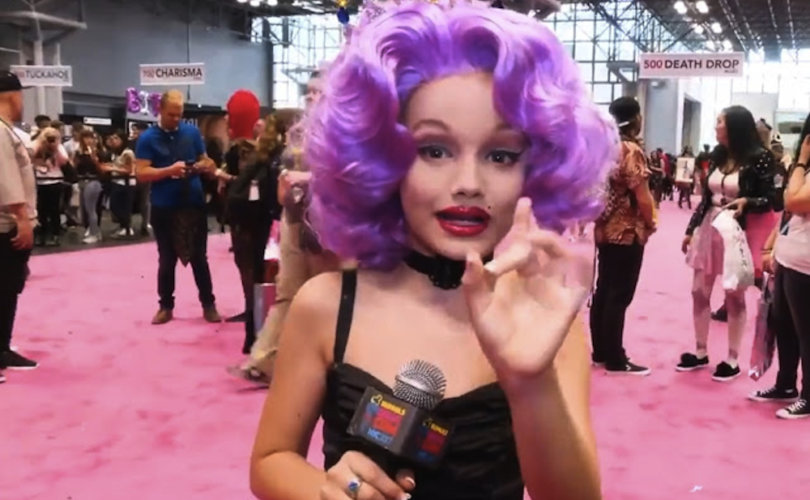 January 18, 2018 (LifeSiteNews) — Homosexuals are so blinded by their own self-justification that they cannot understand what is harmful about sexualizing children, according to commentator-journalist Chad Felix Greene.

The Federalist published Greene’s essay pointing out that the LGBTQIA+ community is both encouraging pre-pubescent boys to become drag queens and heroicizing those who actually do. Case in point: nine-year-old drag queen Nemis Quinn Mélançon-Golden, better known in licentious circles as “Lactatia.”

The Montreal boy performs the usual lewd sexual gestures and gyrations, wearing false eyelashes, thick makeup, glittering women’s clothing, and wigs. Greene noted that the boy is heralded as the “cover girl” for a line of sexy fashions sold online by Brandon Hilton.

I think this new generation of drag kids is brilliant and inspiring!@Desmond_Amazing and Lactatia are the future! @TheHouseofMann is just making sure they look SICKENING!

people will talk no matter what, might as well give them something FIERCE to look at! pic.twitter.com/Vx5JB7aFvL

Critics say Nemis is being abused. “The boy is emulating an adult woman being sexually provocative,” Greene summarized. “The LGBT left’s intense focus on labeling then exploiting LGBT children like ‘Lactatia’ holds incredible risk and threatens their futures.”

Little ones are not only being robbed of their childhood and innocence but are being irreparably harmed, exploited, and perverted. Those most damaged include such pre-adolescent drag queens as “Lactatia,” kindergarteners encouraged to consider their “true selves” the opposite sex, children given puberty blockers and other transgender “chemical castration,” and groups of kids brainwashed in public library “story times“ normalizing grown men dressing as flamboyant, promiscuous women.

“Early sexual activity and expression can be devastating to young people, especially LGBT youth,” Greene revealed. “In effect,” exploiters “steal the child’s innocence and impose an adult identity onto him, all to validate their own insecurities.”

Despite the impact on Nemis and other children like him, the homosexual community is championing his shameless pre-adolescent sexualization. Why? Greene asked.

Part of the answer, according to Greene, is that homosexuals delight in sexual deviancy of any kind. Like alcoholics who are all-too-eager for you to share a drink with them, the LGBTQIA+ community finds kindred spirits wherever sexual abnormalcy is upheld as a positive — regardless of the harm inflicted on the innocent. Just search on the Internet for images of Gay Pride parades.

Another part of the answer is the most common reason that activists defend abortion, fornication, lying, or any grave sin: self-justification. It could be said that most sin is born of pride, and self-justification is simply another form of pride. We seek to avoid repentance and excuse our sin by turning it into a righteous cause.

One way to self-justify is to blame God for one’s behavior choices. Hence, the “born that way” mantra of the gay movement. This is key, Greene reasoned, to understanding homosexuals canonizing young children corrupted into debauchery.

“Children expressing sexuality or gender identity that deviates from the norm are viewed as proof that this deviancy is inborn,” Greene explained. He observed that the gay agenda’s “sexual and gender theory … relies on children for validation.”

Hilton does not acknowledge such motives in his praise of a nine-year-old playing seductress. Responding to conservative criticism, he snapped, “If you can’t handle a kid in a sequin onesie, maybe the future isn’t for you,” and ascribed any criticism to hatred, ignorance, and “right-wing propaganda.”

After three days of shrewder reflection, Hilton repeated the “sodomy-is-a-civil-right” spin: “We did not think to discriminate against her due to her age,” he parroted. In other words, Hilton has convinced himself that he is liberating ‘Lactatia.’

“They believe they are saving these children from a life of bullying, fear, and crippling anxiety,” Greene discerned. “So, any child who emulates LGBT culture is widely celebrated and promoted.”

Besides, by and large homosexuals have bought into the propaganda myth that denying one’s “true self,” i.e., being the opposite sex, makes an alarming percentage of transgenders suicidal, and not the inner incongruency of gender dysphoria itself.

Greene concluded that because of their own sin choices, “the LGBT world will never be able to fully appreciate the damage being done to a generation of children pushed into” sexual exhibitionism.

“We cannot stay quiet and allow more children to lose their childhood to … progressives who … fail to grasp the trauma they impose.”

He also called on homosexuals to admit the harm inflicted on children and back off from using them to justify adult lifestyle choices. “It is time leaders of the movement fully recognize the dangers of using young children to validate their sexual politics” he urged.  “LGBT advocacy groups have a responsibility to recognize that sexuality … should never involve children, regardless of the context or motivation.”