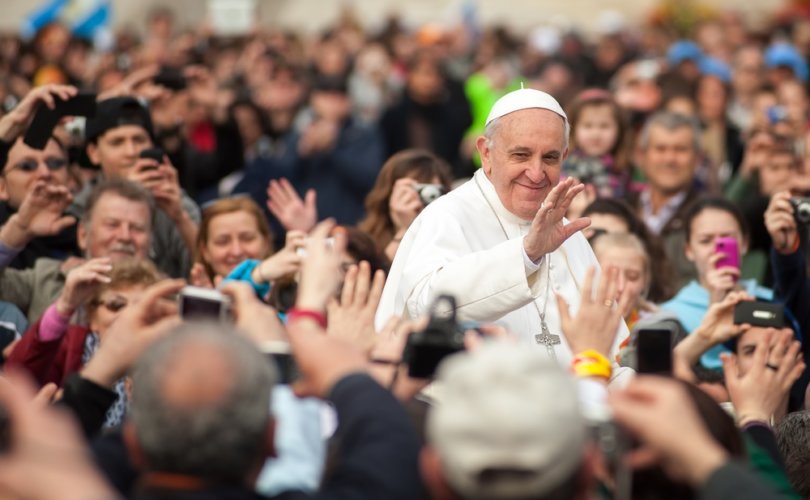 DUBLIN, July 16, 2018 (LifeSiteNews) – The priests of a parish in Ireland have decided not to participate in the upcoming World Meeting of Families in Dublin, after the Vatican invited Fr. James Martin, S.J., to deliver a keynote address on welcoming the “LGBT” community into the Church.

The priests are still considering the best course of action to take as to whether or not to go public with their decision. Recriminations from Church authorities are a real danger. The local pastor is cautious and wise, but well aware of the threats. The glossy pop-up poster for the event, with a smiling Pope Francis on it, has disappeared from the sanctuary. Church renovations are taking place, so this alteration appears innocuous.

The assistant priest thinks that a public stand has to be made. The horrific abortion referendum has flushed Ireland's dead cultural Catholicism out into the open. “There is no hiding it now. No more pretending this is a Catholic land.” He too is aware of the dangers. Public figures either sing with the prevailing secular choir, stay silent, or dare speak out. They know that the child abuse card can be easily played against them. The Neo-Modernists, identified recently by Roberto de Mattei as those who are working within the Church to change it into their own idea, have the upper hand. Now they continue subtly – hiding behind Roman collars – to lead the faithful into believing that in the Church 2+2=5, and that there are no sins because people are just “born that way.”

“The bishops have backed us into a corner.” With his youthfulness the young priest is one of only a few who may live to tell future generations of the early days of “the persecution,” as he calls it. “Things are moving quickly. Australia's move against the seal of Confession; Canada's laws to close down Christian places of education; Irish legislation to prevent therapeutic counselling of homosexuals – these things are all connected. ” In this climate Ireland's young clergy are having to make choices. “Some are looking to leave to safer countries, and to work from there; others are preparing to stay and go to prison. It is that real.” Ireland's future martyrs are looking for help but Rome seems not to care.

Despite the disasters, it is still a land of saints and scholars – although they are fewer in number now than in the past. An elderly priest-academic speaks of the World Meeting of Families event scheduled for August as being, “manipulated in order to promote anything but the teachings of Christ.” He is aware of the lay faithful's reasons for concern. The initial promotional material explicitly containing images supportive of the “Gay” agenda; Courage (one of the few credible organizations who give genuine Catholic support to those suffering from same-sex attraction) having been denied access;  the Saturday evening program scheduled to be a concert at which pro-gay pop-stars perform; and the “inclusivity” doctrine of the Archbishop of Dublin.

What hope is there – humanly speaking – for the lay faithful in Ireland? “None,” according to the saintly scholar. “They have been abandoned by their leaders who are using the likes of Austen Ivereigh to do their dirty work. Christ needs leaders to work through. Now, more than ever, prayer and penance are vital, but so too is courageous leadership. It is time for a fight. A real fight, so that the laity will let it be known that they will not accept falsehoods any longer.”

“Yes. They will, but they need leaders who are in Christ.” His belief is that Ireland's few good bishops are trying to work quietly through the laity, but this is a gamble, since the secularist powers are watching their every move. “It is the bishops who must stand up by joining with the alternative conference that is being organized by courageous laity.”

For many Catholics “on the ground” in this fight for the Faith, the World Meeting of Families is a turning point. They had never considered facing down miscreant bishops or priests before. The thought that the Holy Father himself could be complicit in the promotion of ideas contrary to the Faith of their forefathers is shocking to them. He is given the benefit of the doubt time and again. Some think he is being misinformed; or playing the media against itself; or teaching the truth subtly. Others think he is schizophrenic or bipolar. They are as confused as his teaching.

Whatever the story is, Catholics in Ireland find themselves in a hard place. Will the rainbow flag of the Neo-Conservative activists be waved above their heads as they stand out in an Irish field waiting to cheer the Successor of St. Peter? Will their children, as they hold onto their little plastic rosaries and pictures of Our Lady of Knock, hoping to catch a glimpse of the humble Pope Francis, be exposed to Gay-Pride obscenities? Will the few well educated young Catholics be subjected to the modernist platitudes of prelates who until recently were bed-fellows to Cardinal McCarrick and his “influential Italian gentleman”? The danger of their children being exposed to scandal, or of being seduced by these wolves in sheep's clothing is very real. Angry fathers, and concerned mothers, are becoming aware of this fact.

To go to the World Meeting of Families or not? Catholics in Ireland know they are being monitored by their own. Those who have excuses not to go are taking them.

Those wishing to attend the “Conference of Catholic Families,” a faithful alternative to the World Meeting of Families, can register here.