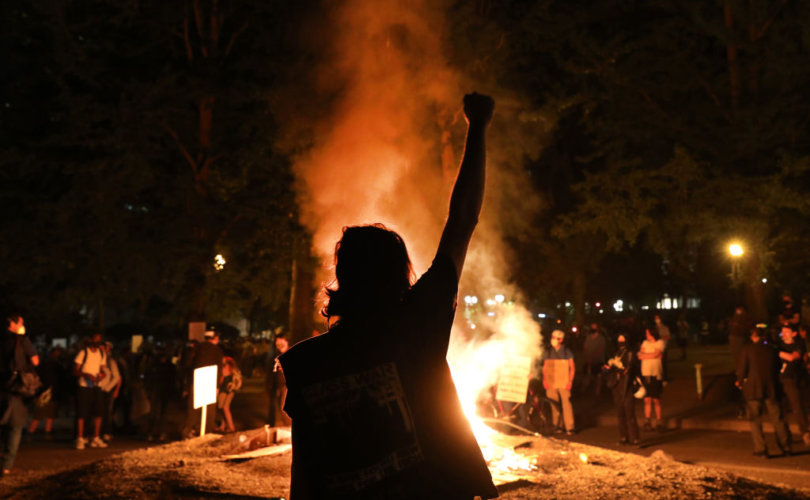 PORTLAND, OREGON - JULY 27: People gather to protest in front of the Mark O. Hatfield federal courthouse in downtown Portland as the city experiences another night of unrest on July 27, 2020 in Portland, Oregon. For over 57 straight nights, protesters in downtown Portland have faced off in often violent clashes with the Portland Police Bureau and, more recently, federal officers. Spencer Platt/Getty Images

August 14, 2020 (LifeSiteNews) – An editorial in The New York Times by Elizabeth Bruenig titled “Racism Makes a Liar of God” presents a sentimental yet stinging indictment of Catholics who reject the present anti-racist activism. She cannot understand why these generally conservative Catholics cannot bring themselves to pronounce the three explosive words: Black Lives Matter.

The editorial calls upon these Catholics to rise above the polemics surrounding the movement and embrace the historical moment to fight racism. Catholics should unconditionally proclaim the slogan, even “understand” the reasons behind the violence and engage in activism as means to “fulfill the hope laid out for Christians in the first epistle of John: ‘Let us love, not in word or speech, but in truth and action.’”

Such rhetoric oversimplifies the position of countless Catholics perplexed by the call to join the BLM revolution. They are far from being the cold, heartless and oblivious Christians Mrs. Bruenig paints in her op-ed. They are filled, however, with legitimate concerns that need to be addressed.

Of course, these Catholics can pronounce a lowercased “black lives matter” without any problem. The Catholic Church was the institution that, for the first time in history, broke the back of “systemic” slavery that was the fate of most people in the ancient pagan world.  The argument the Church advanced back then was that everyone is created with an immortal soul redeemed by Our Lord Jesus Christ. And thus, all souls matter.

For this reason, the Church went forth and taught all nations, races, and peoples baptizing them and instructing them on how to live lives of Christian virtue. The Church has a long and honorable history of seeking after the salvation of souls wherever they might be, even to the ends of the earth. She never wavered in her conviction that all souls matter.

Thus, Catholics are by their nature anti-racist. They ardently desire the salvation of all souls, without exception, regardless of race. Of this, there can be no doubt.

The doubts come when it is time to pronounce the uppercased brand: Black Lives Matter. Attached to this label are causes and philosophies that clash with the Church’s solicitude for the salvation of souls. Reluctant Catholics wonder how BLM activists can fail to grasp that the message being transmitted by the movement is: Not all souls matter.

The cry of these three volatile words implies an endorsement of the breaking of God’s moral law since the BLM movement enthusiastically embraces the LGBTQ+ cause and Planned Parenthood. The echoes of this catchy slogan resound on the violent streets of Portland, Oregon, where cursing Antifa and BLM rioters burn Bibles and U.S. flags, destroy property and injure police officers of all races. Intertwined in the motto’s short syllables is a Marxist class struggle narrative in bitter conflict with the Church’s social teachings and responsible for the death of tens of millions of lives…and the eternal damnation of countless souls.

Is it any wonder that Catholics cannot bring themselves to utter these three words that can represent a spectacular clash with the Great Commission, which affirms that all souls matter? Justice demands that the BLM subversive and immoral positions be rejected since they contain falsehoods by which souls might well be lost. Unless the movement abjures these evil influences, it cannot command the respect, much less the allegiance of those Catholics who sincerely want to help.

Mrs. Bruenig dismisses these associations with leftist causes as incidental links that cloud the real debate over racism. She holds that Marxist groups are but fellow travelers with whom all can and must march in protest against injustice. Just as pro-lifers might march with atheists, so also Catholics can join Marxists. Never mind that Marxists have always astutely used Catholics (whom they dub “useful idiots”) to further their nefarious cause. All too often, this unholy alliance has later resulted in the persecution and death of the naïve Catholics who embarked on this dangerous path.

The writer also tends to reduce the resistance to the BLM cause to conservative reactions to the vandalism of churches and statues. Indeed, the desire to damage and destroy is openly admitted. BLM sympathizer Shaun King called for the smashing of white Jesus representations, saints and stain glass. “Tear them down!”

However, Mrs. Bruenig claims destroyed property can be rebuilt or replaced (much, probably, will never be). Ignoring the wisdom in the adage that “two wrongs don’t make one right,” she repeats the cruel and false mantra that reluctant Catholics value money and property over black lives. Everyone knows the statues themselves are not the target in the attack. Rather, it is who they represent. Reducing Catholic resistance to an attachment to real or personal Church property is again simplistic. Destroying property will never be a morally legitimate channel of protest for the loss of life. It is immoral to sin against the Seventh Commandment in protest over violations of the Fifth. Both acts are morally indefensible. They subvert the nation’s common good and must be rejected.

Reasons Why This Cause Cannot Be Embraced

These simplistic excuses are but a sideshow that deflects from the real issues.

There are three telltale signs in the BLM movement that indicate why Catholics cannot embrace this revolutionary cause and still be faithful to Our Lord Jesus Christ.

The first is the movement’s hypocritical unconcern for the innocent lives of black unborn babies. Indeed, its militants, sympathizers, media supporters, business CEO enablers and fellow travelers are all part of the pro-abortion establishment. BLM embraces the sin of procured abortion, the scourge of the black community. This untenable position signals to concerned Catholics that the movement does not believe these babies have immortal souls that are redeemed by the Most Precious Blood of Our Lord Jesus Christ. These souls, tens of millions of them, do not matter to the BLM movement.

The second reason why Catholics must withhold support is that the movement clashes with the Church’s moral teaching. Again, BLM joins all those hostile to Church teaching and those on the wrong side of the long Culture War that is devastating families across America. The crushing weight of absent fathers, struggling single mothers and broken families destroys the black community and puts its children at risk. Yet BLM activists do not seem to care about restoring the family to its order and dignity. With Adam and Eve, God instituted traditional marriage as the union of one man and one woman to the exclusion of all others. The Fourth Commandment enjoins children to honor their father and mother. The perfect way to raise children is inside the shelter of the Christian family.

The BLM pledge is to “disrupt the Western-prescribed nuclear family structure requirement by supporting each other as extended families and ‘villages’ that collectively care for one another.” Behind BLM’s “queer‐affirming network,” freed of “the tight grip of heteronormative thinking,” Catholics discern the anti-Christian paradigm. It is unacceptable to anyone who believes that all souls matter.

A Narrative Fueled by Hatred Not Love

The final reason for not supporting the cause is that the BLM promotes a secular narrative deeply steeped in the Marxist class-struggle dialectic of its two Marxist co-founders. The movement adopts a false worldview where everything is explained by a division of society into oppressors and oppressed and mutual hatred between the two camps. It is a cold, deterministic and materialistic narrative. It does not accept the existence of an immortal soul.

Nothing could be farther from the Catholic worldview in which so much is explained by things spiritual, sacramental and supernatural. This perspective informed by the love of God and neighbor is the easiest and surest path to understanding the just and harmonious relationships that can and should exist among humanity’s various races and ethnicities. Marxist egalitarianism is as removed from the Catholic sense as hell is from Heaven. It is not fueled by love, but in the hatred easily seen in the actions of many sympathizers. They eschew all polite and civil discourse. They prefer instead to explode into obscenities and violence.

A Catholic response to the problem never excludes the key role of God and His grace. It harmonizes people rather than dividing and pitting one against another. Racism will only be overcome when confronted by a culture characterized by courtesy, respect and Christian charity, and the Catholic worldview that all souls matter.

What commentators like Mrs. Bruenig fail to understand is that they are involved in the wrong fight by the wrong people. It is hard to grasp how Catholics are expected to unite with a liberal establishment that has consistently opposed the Church and Her moral law. Equally disturbing is how such commentators allow the debate to be framed by the left that has proposed a discourse without God and leads to the calamitous path of socialism and communism.

However, the most terrible part of their outlook is its incredibly narrow-minded vision of society. Mrs. Bruenig and others have decried the reluctant Catholics as “oblivious” to the racial injustice found in economy, politics and culture.

However, these commentators are far more oblivious to the much greater moral crisis that afflicts all society. If they would but look around themselves, they would see how it is everywhere and is devastating America. They would find broken families, black and white, suffering from the disastrous effects of the sexual revolution. They would find shattered communities destroyed by an individualistic culture where no one cares for others, just themselves. They would discover godless regions of the nation where vast segments of the population struggle with existential questions of why they live.

The racial issue is extremely important, but it melds into this generalized moral crisis. To think that a solution can be found without a general moral conversion and return to virtuous and ordered living is wishful thinking. A return to God is the only option.

This fight takes on importance in the face of the COVID crisis and its catastrophic economic consequences. It does not take much to perceive that the whole system could easily come tumbling down. Today’s strategy should be for all Americans to unite, not splinter, to find solutions together to the huge moral problems the nation faces.  The most efficient way to solve the racial issue is to address this universal moral problem by which all souls matter.

John Horvat II is a scholar, researcher, educator, international speaker, and author of the book Return to Order, as well as the author of hundreds of published articles. He lives in Spring Grove, Pennsylvania where he is the vice president of the American Society for the Defense of Tradition, Family and Property